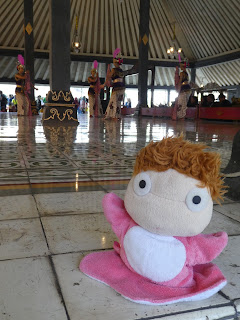 Puppet Ponyo taking in the traditional dance performance
at Yogyakarta's kraton (and swaying a bit to its music?!) 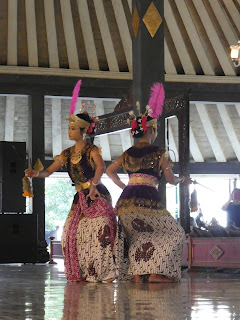 Beautiful the maidens may be but
armed they also are! :O 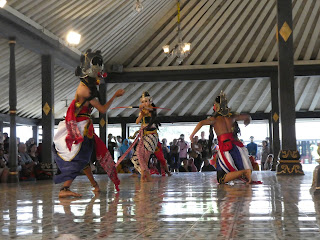 A dance involving a princess who shoots arrows
at demons that threaten her :O
For many people, the highlight of their visit to the royal palace of Yogyakarta involves the taking in of a cultural performance held at the complex's inner pavilion.  Depending on the day, it could be such as a gamelan concert or a wayang kulit (shadow puppet) show.  On the day (a Sunday) that my German friend and I visited, we were treated to a one-hour-long performance of three traditional Javanese dances to live music courtesy of a gamelan orchestra.
If truth be told, I was initially less than enthused by the dancers, who were beautifully clad and not without talent but whose dance moves were excruciatingly slow.  And it didn't help that, as befits Central Javanese court dance conventions, the quartet performing the first dance were expected to keep their faces expressionless, communicating more through ritualized body movements and stylized hand gestures.
At one point, I got to finding the activities of the birds that were flitting about in the rafters to be more fascinating than what was happening on stage.  But then I noticed a flash of light below and realized with a start that the courtly performers were waving krises about in the air and even pointing it at one another!  With my attention squarely now back on the dancers, I got to recognizing that the particular dance being performed involved a battle between four heroines: not at all the kind of subject matter one would have expected of an artistic number whose pacing gave it a dream-like feeling, and actually caused some members of the audience to fall into a slumber!
His hairy legs gave away the sex of the long haired, masked performer who had the stage all to himself for the next dance.  Any hopes that a male dancer would have faster dance moves than the female dancers who had preceded him though were soon very quickly dashed.  And when his dance ended, the audience numbers thinned considerably as quite a few people decided they had their fill of performing arts for the day!
Too bad, really, as I reckon that the show's organizers had saved the best for last: with the final dance in the set being the performance of scenes from the Ramayana involving a beautiful princess repelling attacks by demonic individuals with a bow and arrow.  The fastest paced of the three dances by far, it also -- surprise, surprise! -- was the most exciting and interesting.  And contributing to the fascination was seeing a traditional dance based on an ancient religious epic poem coming across like it could have come out of a contemporary feminist trope!

On the subject of gender (roles): it's interesting that the set of traditional dances chosen to be performed exclusively featured unmasked females and masked males, with not a single unmasked male dancer in sight.  Also noticeable was that all the gamelan musicians were male while -- if I remember correctly -- all the vocal accompanists were females.
While the division of labor along gender lines might have been expected of a Muslim society (which Yogyakarta's predominantly is), the significant roles accorded to females came as a bit of a surprise.  Still, the biggest eye-opener for me may well have been how halus (refined but also "soft") were the observed actions of a good many of the male as well as female performers.  Indeed, as I joked to my German friend, if not for the abundant and coarse hair on the legs of the second dance's sole performer, I honestly would not have been able to tell if the dancer concerned had been male or female! ;b
Posted by YTSL at 11:51 PM

It must be different living in a large city and all the culture your expose to.
Coffee is on

The smallest town I've ever lived in had a population of about 30,000 -- but it was pretty international/more multicultural than might be expected thanks to the presence of the liberal arts college there (which I attended) having a student population that was 10 percent foreign. Still, you're right, that it's different when you live in a large city.

For the record: The Indonesian city of Yogyakarta is supposed to have a population of just around 412,000 -- but if you take in its metro area, the population size rises up to over 4 million! :O