The Umbrella Movement is still going on! 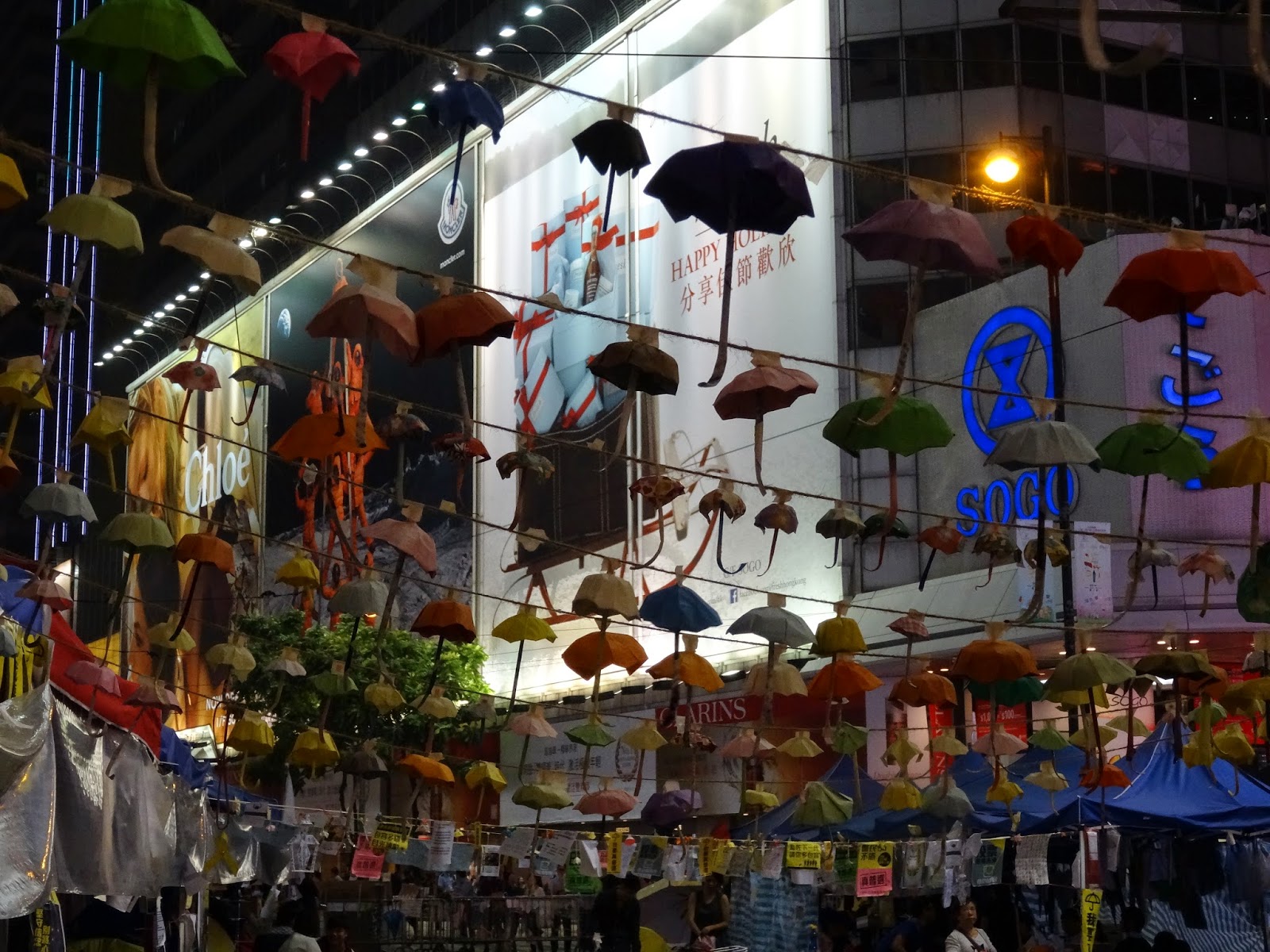 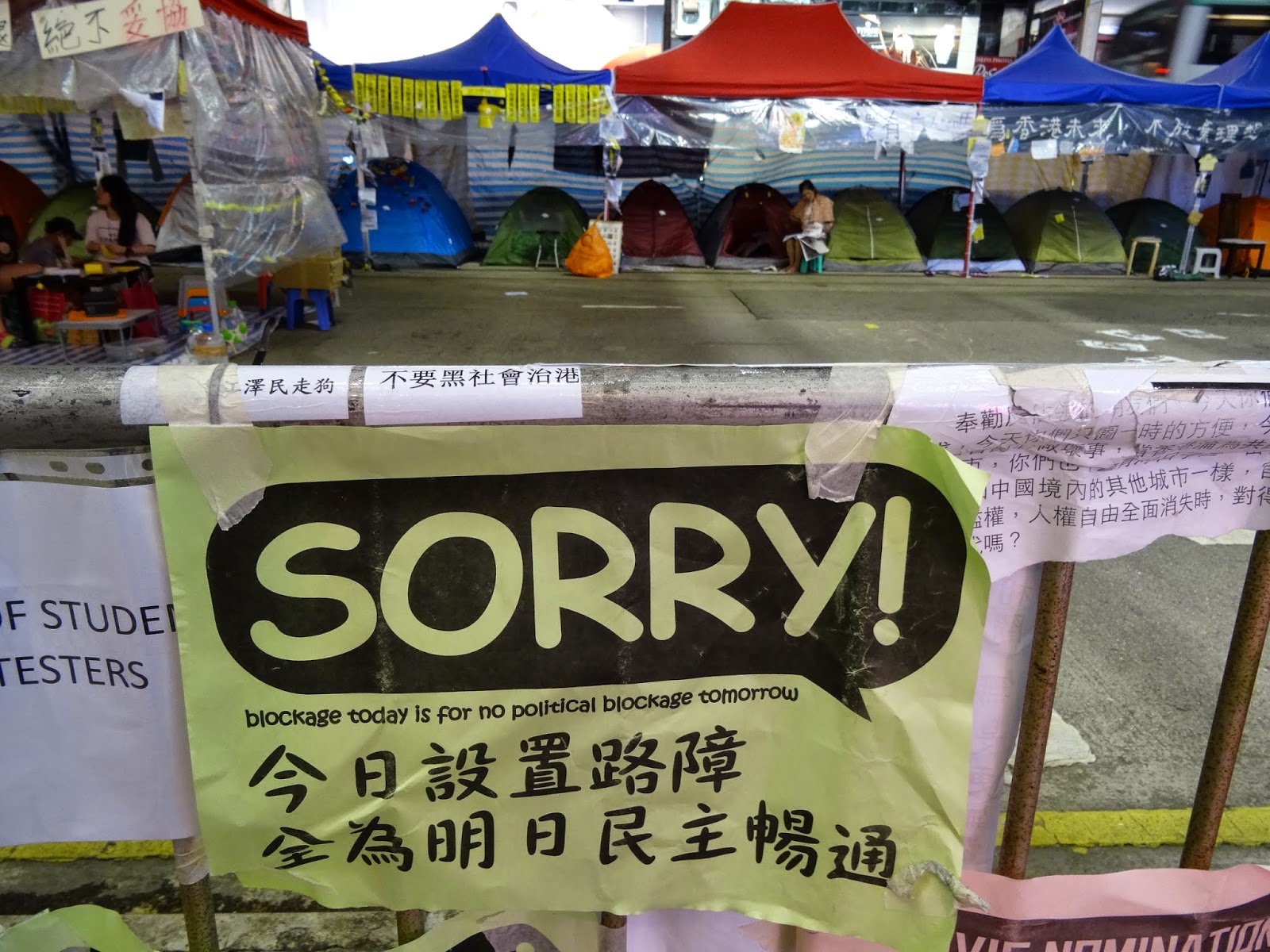 ...and the political and/but polite... 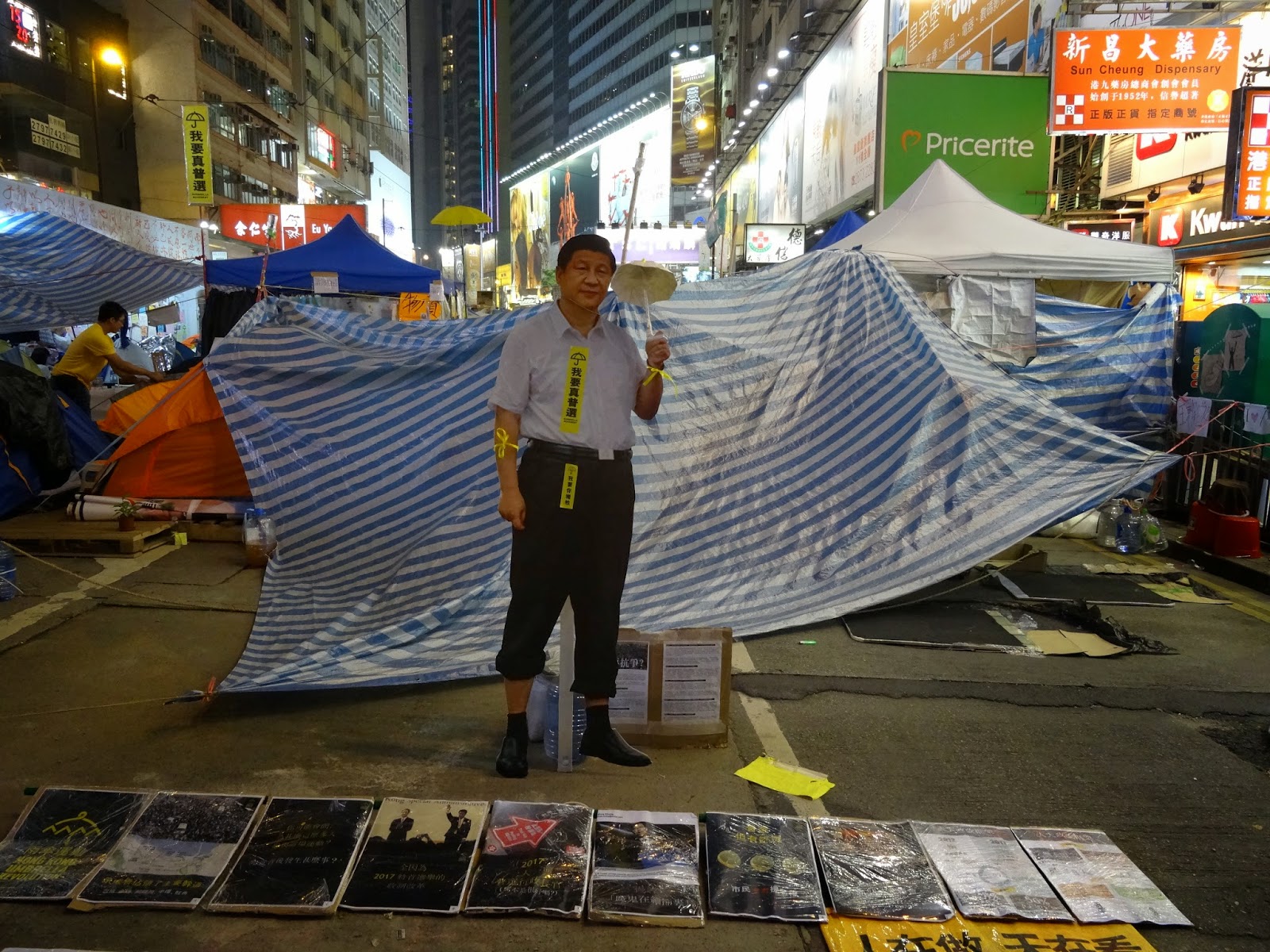 ...and the whimsical (and should it not be clear,
that is just a cutout of Xi Jinping there!)

At some point in the near future, I can see myself blogging again about something other than the Umbrella Movement.  In fact, there's already a part of me that wonders "why write some more about the protests in Hong Kong since I've already written thousands of words about it and others combined have probably written more than a million words on the subject"?

The reason why I do is to help publicize the fact that the Umbrella Movement is still going on in Hong Kong -- something many people outside of the Big Lychee may not realize due to accounts of it having vanished from the front pages of many newspapers in the rest of the world and international news websites too.  (Heck, it's not even the number one news in Hong Kong newspapers for some days now.)

The thing is that -- let's face it: for many people, being peaceful is rather boring.  Far more exciting are news of violent clashes and outcomes.  But when even one evening's worth of celebrations of a World Series win has resulted in more mayhem than the Umbrella Movement's many days and nights of protests, surely that's something worth noting, if not commenting on?
Also, the truth of the matter is that there's currently an impasse -- and that's not very interesting to report on either.  Increasingly, there's a sense that "Occupation" alone is not going to yield the political results that were the stated principal aims of the Umbrella Movement.  And yet, how does one escalate matters without resorting to violence or something so desperate that it will cause things to backfire?

I'll leave that question for greater minds to answer.  All I know is that, in the meantime, the protests are indeed still taking place -- thanks to a number of admirable people being prepared to sacrifice their time, bear physical discomforts and the ire of impatient others, and more.
Posted by YTSL at 11:28 PM

Glad to hear that the movement is holding its ground! I still follow the news on SCMP, but only every few days now instead of every day.

Are there still a lot of people coming out in the evenings and on the weekends?

How to escalate the protests peacefully is a tough question. Like you, I really don't know the answer. I wonder if "escalate" with its connotations of violence is the right way to go. Maybe the answer lies in digging deeper roots and somehow spreading the ideas and community of the movement beyond the occupied areas.

Finally, while I think it would be perfectly fine for you to start blogging about other things, I for one am glad for the reminder and hope you continue to write about the movement as you are moved to. ;D

This is the first I'm learning about it, and sounds like you are very passionate on the subject :) I say keep writing as you feel you want to :)

I have taken a break, but am now back blogging with a new name and changed around a bit :) Missed your blog as it was always and still is a means to learn new things :)

For someone like me who has to make an effort to visit an Occupy site, following blogs like yours and Fragrant Harbour, etc., some great Facebook pages have been vital to keeping up with the movement since the local news has been, well, lets just say I needed fuller information. So please, as long as it continues to interest you, continue to write about the movement, I especially love your pictures, the few I have taken when I have gone to the sites do not compare well at all.

I do think, however, that it being quiet in the media now could be an opportunity, more chance for useful negotiation, less possibility of posturing for the masses. Maybe I am too hopeful, but as you said, it has been so peaceful and positive, I only want to think of peaceful and positive resolutions.

Thanks for your continued interest and support -- and I trust you've been telling people in your hometown about what you saw on your most recent trip to Hong Kong.

I've not been to the protest areas much this week -- because of work, etc. But when I have done so, it looks about the same as when you were here a few weeks ago -- only with more and more creative pieces at Admiralty; and also there's a small study area in Causeway Bat now too.

I have similar thoughts to you re "escalating" the protests. And will add that channeling efforts to help Hong Kong by doing more volunteer/community work is a thought as well.

Wow re this being the first you've learnt about the Umbrella Movement! Re my passion for the subject: I think I'm fairly moderate compared to others, actually! ;)

I have to make an effort too! But agree about the picture of the protest (areas) being quite different on blogs, etc. versus commercial media -- and like I've written before, I often find myself more worried about the situation when reading about it than when I'm actually there seeing things for myself.

Thank you for following my blog. It doesn't have that many visitors but I'm glad that it's helping to keep people informed, etc.

Please support the revolution in every small way you can, avoid these businesses that directly support Beijing-HK gov't-CY Leung and billionaire tycoons:

- Avoid patronage of anything to any malls or major shopping centre, *except in HK public estates and cha chaan tengs*.

- Avoid banking with anyone other than Standard Chartered and Citigroup.

- Avoid any major hotels chains in the Asia Region

- These billionaires also controls most telephone, mobile, and ISP companies as well as the MTR, Gas and Electric companies, all HK Milk/Ice-Cream/Dairy production (Dairy Farm)

You ask people to support the "revolution" in every small way we can -- and then effectively outline how and why it can be so difficult to do so. To boycott so many different businesses is surely impossible?

Also, Singapore Airlines and Cathay Pacific as PRC Chinese airlines? PRC friendly maybe -- otherwise, I'm sure the Singaporeans and the expat taipans at Swire would laugh at the labelling!

YTSL, I disagree, it is very easy to do so. You just have to change your habits. I am being very practical here. Remember I said avoid, I didn't say "never patron." I didn't say take yourself "off-the-grid" given these billionaires also control ALL the utilities of HK. You and I can sign a contract/wager, I can prove it to you if you make it worth my while.

- Patron the businesses in public estates and small size business, they are everywhere if you aren't so lazy. There are restaurants (both chinese and western foods) in estates and non-shopping malls in older areas like Kwun Tung, Mong Kok, Kennedy Town, Western, Tai Koo Sing, even Central or TST.

- Wet markets are everywhere in every district, they have drugstores, bread shops, etc.

- There are farmers markets in HK. You can also buy direct from farmers in the NT or from their wet market stalls.

- There are clothing stores everywhere, some world-class quality. I have no problems buying clothes in HK without stepping foot in a shopping mall.

- I don't see Singapore and Cathay Pacific supporting democracy nor condeming the HK Police...where are their conscience? Guess who owns the Swire Group?

Aaah... try to avoid, not completely boycott or even completely avoid. Big difference.

Also, since you seem to feel so strongly about it, please go ahead -- surely you don't need to make a contract/wager with me to make it worth your while to do?

And definitely re there being small businesses, etc. to be found. (But ironically enough, sometimes some of them are the ones who seem most vocally anti-Umbrella Movement!)

With the banks and the airlines: I'm not sure that one is better than the other, especially with the latter. I.e., I don't see any airlines coming out in favor of democracy for Hong Kong or going against the Hong Kong police. But, then, I don't expect to - they're airlines, not political organisations!

And in terms of what I've been positively trying to do consumer-wise: I've been eating at the neighborhoods where Occupy protest areas exist more than usual -- to my mind, so that I add another mouth in there to help minimise the loss they (otherwsie) would say they are incurring as a result of the protests. And yes, I've been buying groceries, etc. to donate as well.

What have you been doing (as opposed to urging)?

avoid(verb)
keep away from or stop oneself from doing (something).

I find it amazing that businesses in HK are blaming Occupy movement when they should blame Mr. Xi Jinping for his anti-corruption crackdown when they business slows. Wonder why they don't blame themselves for building their business so reliant on mainland tourists?

True, I haven't seen airlines supporting or coming out in favor of anybody...however, I have seen banks becoming more political organizations by condemning Occupy and towing the CCP party line.

Actually those who oppose is not really small businesses because they are taxi and minibus co-ops, gold/jewelry shops, and luxury shops catering to the mainlander.

Personally, I am doing now:

- Having my meals at restaurants in public estates or wet markets. Buy my groceries, toiletries, and bake goods at wet markets.

- refuse to shop/patron any businesses inside a shopping center owned by the tycoons family.

- moved my finances away from any corporation or business supporting the tycoons or the CCP. This includes MPF, insurance, deposits and other accts. Switch out of any products investing in China/Russia.

- have not flown any flights operated or marketed AC, SQ, or CX (or any chinese airlines) for the last 10+ years.

- not purchasing any dried seafoods with PRC chinese origins (switched over to Japanese instead.) for last 5+ years.

- not buying anything "made in China" unless there are no alternatives. Use less of the item if it is made in China.

- not patronize any individual business that have a pro-Beijing stance.

"Actually those who oppose is not really small businesses because they are taxi and minibus co-ops, gold/jewelry shops, and luxury shops catering to the mainlander."

If only this were true. Sadly, among small businesse people I know who are vocally against Occupy are laundry shop and herbal tea shop operators - the kind whose businesses you figure would be sympathetic to the Umbrella Movement causes, if they actually knew better about them.

On the other side of the coin: some financial sector and other white collar workers that I thought would be anti-Umbrella Movement are very much supporting it!

Re what you're doing in support now: Great, keep it up!