One night in Mongkok 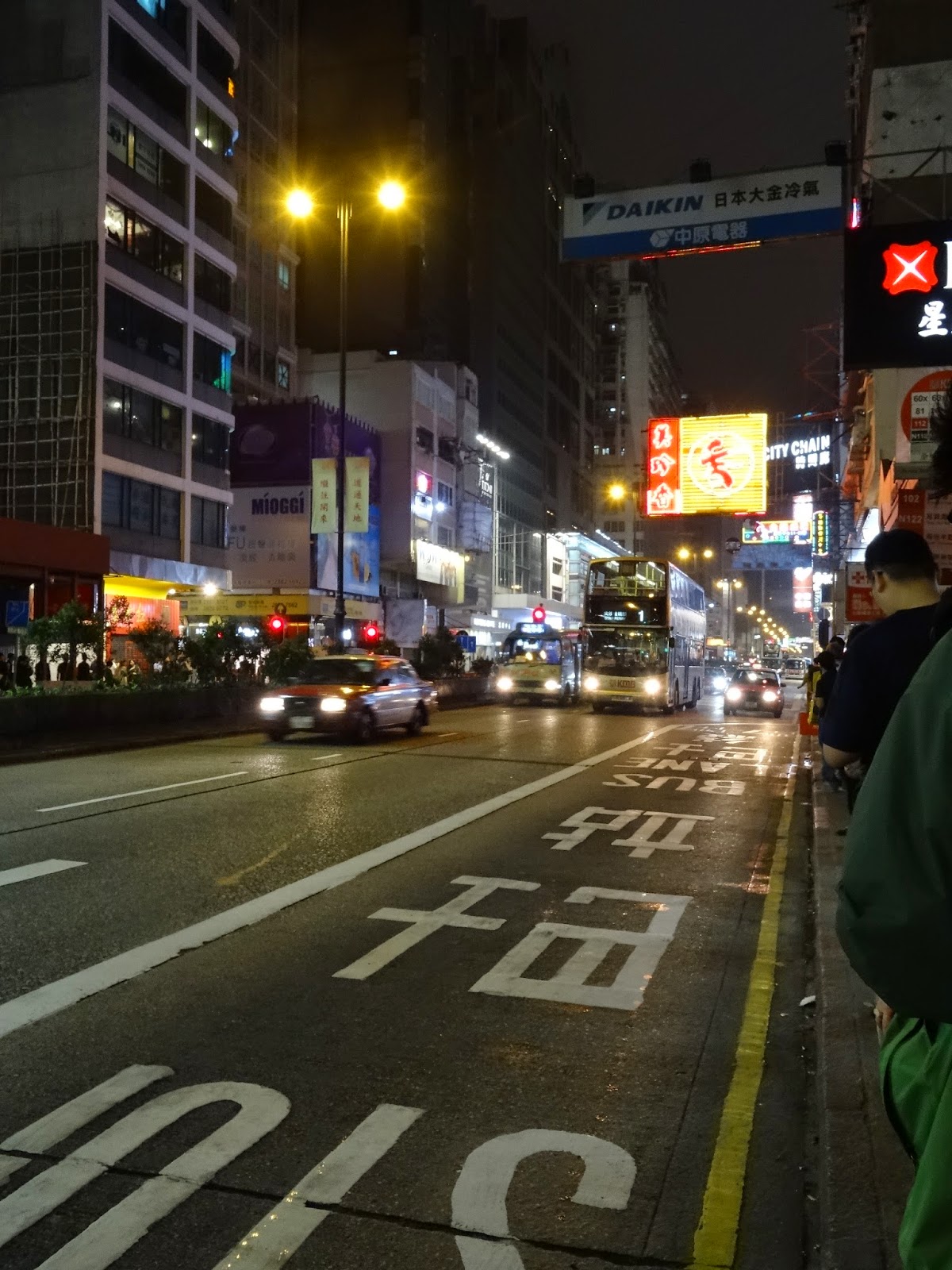 Where just a week ago, it was Occupied space,
Nathan Road is now open to road traffic 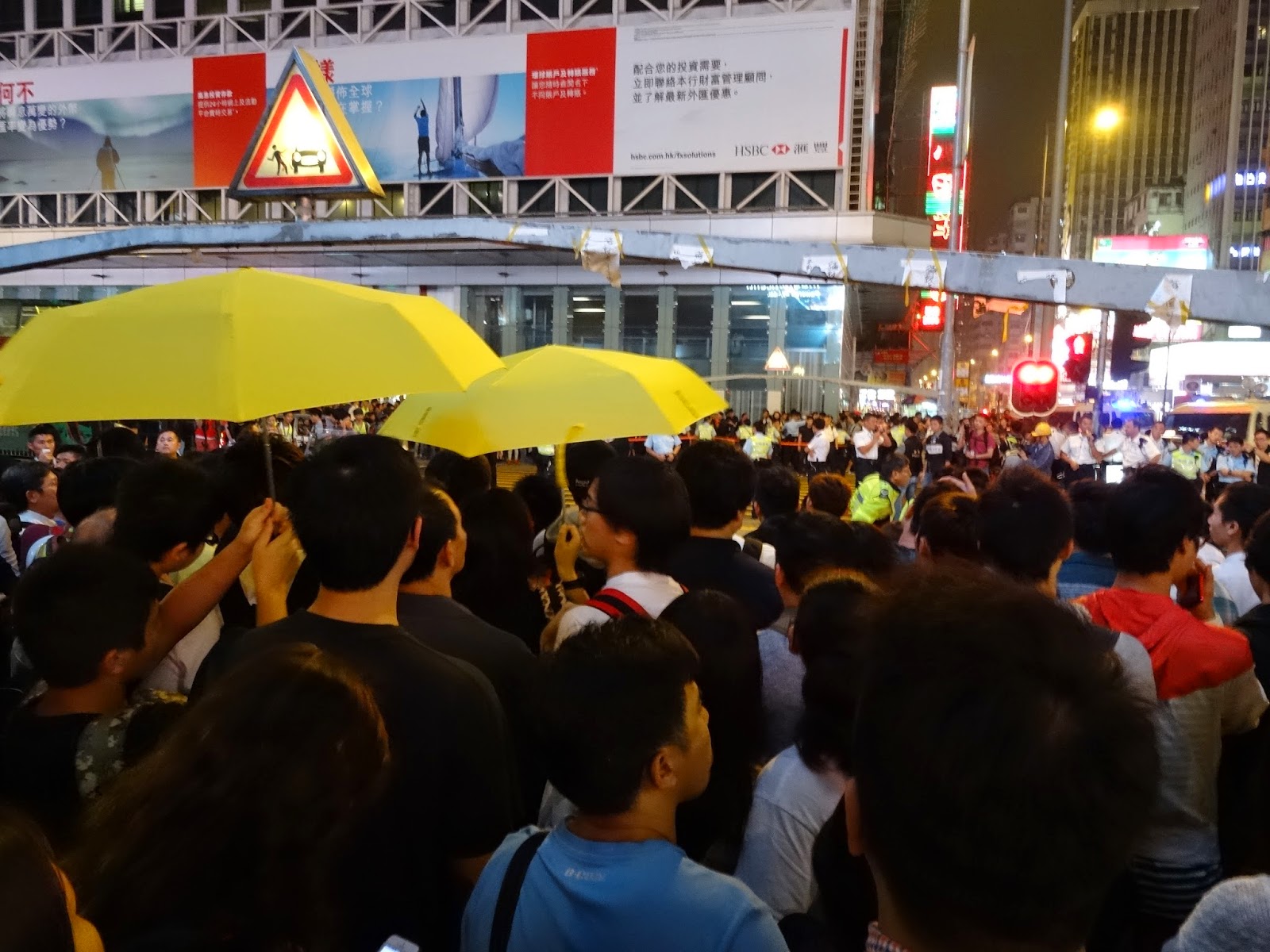 Still, as this photo taken at the intersection of Nathan Road and
Argyle Street shows, things are hardly back to normal just yet! 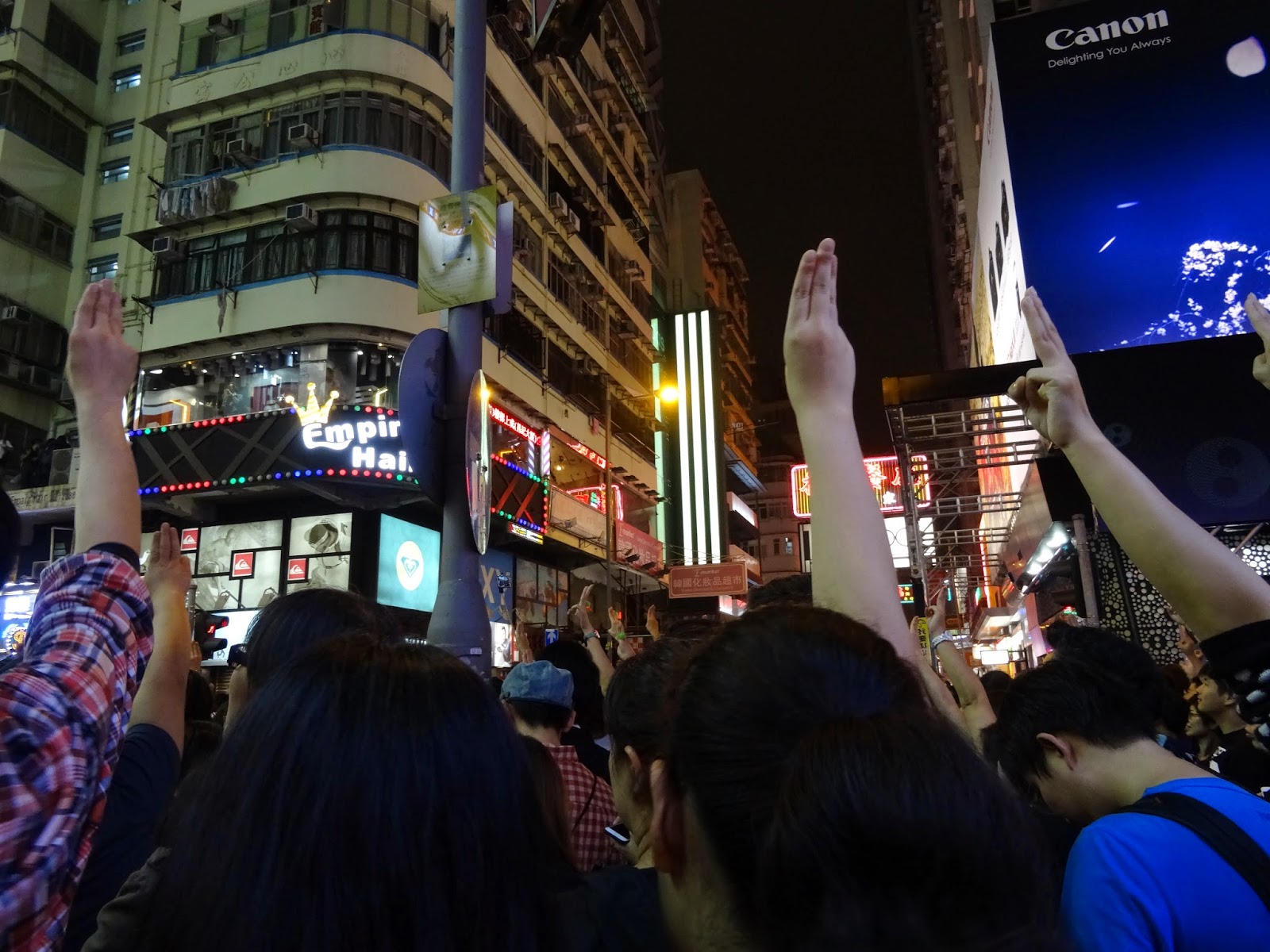 An even more surreal sight: The Hunger Games' three finger salute
being used by Umbrella Movement members in Mongkok

Once upon a time, Mongkok was my favorite Hong Kong district to shop in -- including for such as DVDs, Sanrio and Studio Ghibli items, hiking gear, shoes, sneakers and cargo pants.  Starting from about three years ago though, I felt that it was catering more to -- or, at the very least, attracting more -- mainland tourists than locals and other folks.  So my visits to the area noticeably decreased.

In recent weeks, however, I've begun spending time in Mongkok again -- in particular, in the "Occupied" sections of this Kowloon district.  And earlier tonight, I spent a few hours window shopping and "shopping" in the area.


Although there certainly was a large contingent of police as well as protestesrs out tonight, I actually -- and happily -- didn't see any clashes take place.  The way it looked to me, the protesters made sure to not overstep their bounds and the police were largely content to stand their ground rather than bid to aggressively engage with the protesters -- with the result that the overall mood seemed good humored even while there was a distinct air of rebellion about.


For the record: at no point did I see any of the protesters standing in space where pedestrians weren't supposed to be.  And at times, it was indeed quite difficult to tell if certain of the people present in Mongkok tonight were there to shop or "shop" -- this especially since some of the protesters did do such as go buy some gai dan jai and offer these delicious treats to people they passed on the streets!

Still, it was clear enough -- from such as the sizable number of yellow umbrellas being carried about -- that there were defiant acts of protests taking place.  The feeling I got too from the sizable crowds tonight is that people are apt to scoff at the authorities' attempts to use such as the courts and the police to deal with a political problem, and (consequently) feel compelled to do their part to demonstrate how ridiculous is the situation that has been brought about -- as much by the government's intransigence as well as ordinary people feeling a need to get out and try to make a difference.
Posted by YTSL at 1:05 AM

the HK Police is doing the dirty work...like arresting and physically beating the reporters and protesters handcuffed...

Effectively, HK Police is becoming licensed and government sanctioned thugs/triads...only thing left is for these HK Police to demand a bribe for something...

This is basically a positive blog which seems like a fair description of what's happening in Mongkok. Remember, the police are Hong Kongers too, and have a job to do to prevent total anarchy...The so-called Umbrella Movement had weak leadership from the beginning. The three finger salute from a mediocre Hollywood franchise like The Hunger Games, seems like a pretty feeble gesture...If the protest movement had started the right way, like demonstrating at cage homes to show the world how Hong's Kong's underclass lives or if they had demonstrated at a golf course, for instance, to show how tycoons are wasting land which could be used for affordable housing, it might have laid a foundation of a growing movement. That didn't happen because I don't think the originators of Occupy and the students, know how to communicate to the working class.

Movements inevitably produce a least one good leader who will make a difference. If such a person emerges, I think it will be a woman, who will intuitively understand that
the student leadership is just a collection of egos jockeying for future leadership positions in the government that will inevitably lead to the same autocractic paternalist
system that is the cause of the current civic unrest.

I agree that the Hong Kong police is doing the dirty work -- and don't think they should be doing so.

Re your remarks on the Security Bureau: I gather that means that you won't be "shopping" in Mongkok any time soon?

I think you're being overly harsh on the Umbrella Movement's leadership.

For my part, I thought that the students wanting to protest at Civic Square (in front of the Central Government Offices), where July 1 marches have ended up, made symbolic and other sense -- much more so thatn Occupying the Central financial district, in fact.

Remember: this all started because the authorities refused to let people enter what was designated as public space when the complex first opened!

Re the students, etc. not knowing how to communicate to the working place: please bear in mind that some of them are working class themselves. Also, that the Umbrella Movement certainly does look to have a number of working class supporters, including many of the people who were "Occupying" Mongkok.

1) Total anarchy is not something I think is going to happen in Hong Kong soon. Remember: not a single car or building has been set on fire, just one window thus far has been broken, etc.

2) I have to say that reading your comments really sadden me because it makes me think how terribly the Umbrella Movement appears to have been portrayed by your sources (besides -- or is it including? -- myself)!

YTSL, I would 'shop' at Mongkok...but will take precautions given the amount of cameras in HK...HK is becoming a police state...

HK Police (or cops in general) are held to a higher standard in terms of everything, including honour...that's why police statements are taken over the word of the ordinary citizen...

**However, these days HK Police is NOTHING more than licensed thugs. Can't be trusted and doesn't have any honour or integrity.**

Personally, I think the reporting of the Occupy Central been biased and cast the Umbrella movement in a bad light, contrary to what happened on the ground...like suppressing bad things done by the police and enlarging anything disruptive/destructive done by the protesters..

Thanks for taking the time to lucidly and rationally reply to my comments...Actually, The Western media reporting are almost all pro-Occupy, creating a positive image of the protestors...Hong Kong was always a complex city and now it has even become more so...I'm currently reading the recommended A Modern History of Hong Kong by Steve Tsang, the first history book I've read in about a dozen years. It is giving me insight into the events leading up to the current situation in Hong Kong.

I read an article in the NY Times about demonstrations in North Point, protesting the sale of ivory. There is certainly a lot of protest in Hong Kong, a city that one can never accuse of being dull...This article informs me that Yao Ming has released a book and documentary on the poaching of elephants and rhinos for the sale of their tusks and horns. A basketball player doing a public service for the animal kingdom. There's hope for the world!

Interesting (and encouraging) to see some more "shopping" going on this evening in Mongkok. There are people who seek to continue to protest, and in a way that can seem surprisingly good humored -- and more power to them for that.

Re reportage on Occupy: I think there are biases from all sides. But something I definitely notice is that peaceful protests often seem too boring to warrant much coverage from most people/media outlets. On a related note: it can seem like many people only see and remember the most negative bits of news.

Good to see you back and continuing the dialogue.

I'd like to genuinely ask you this then: if the Western media's reportage of events have been largely positive, where does this idea/fear of "anarchy" come from? Is it based on experience and views of events taking place outside of Hong Kong rather than Hong Kong itself?

Re protests in Hong Kong: yes... and to think that there still are many people who think that Hong Kongers just care about making money and shopping! Honestly, that idea does make me want to laugh! :D

You asked me in this comments section where my fears/idea of anarchy come from. I may be cautious at political gatherings or in very large crowds where I'm always watching where my exit could be. This is probably due to my cautious nature more than anything else. Of course, violence or anarchy is possible to erupt in any large assembly of people.

I notice you listed Locke among your recent viewings. I had recommended this film a few months ago in this comments section...I basically agree with your review and 6.5 rating for Interstellar. Overlong, too much homespun dialogue and boring scientific theory and an awful sugar coated Spielbergian ending. I liked Inception from this director, but I don't think I'll change my mind about this one...I read your review of Paths of Glory, the most sharply written review I've read from you yet. So good, it even made me feel jealous that I couldn't have written it as well.

Also saw The Soong Sisters. Considering that this movie was probably censored, Mabel Cheung still managed to make a pretty good movie...Don't Go Breaking my Heart, a fairly pleasant confection from Johnnie To...Ocean Heaven: for a first time director, this wasn't bad at all. Of all the martial artists who made it in the movies, I respect Jet Li the most.

Finally, I would like to recommend a movie (if you haven't already seen it): iNaked, a low budget movie about a Beijing artist.

If you don't mind me saying so: I think your views of political gatherings and large crowds may be overly influenced by what you've experienced in the US. In all honesty, there generally is a very different vibe indeed at Hong Kong ones.

Re the films: will just comment on one of the ones you mentioned for now - re "The Soong Sisters": did the version you see feature the first military plane flight in China? If not, then you saw a more censored version than one of those that I've seen. (And yes, there are different versions around of this film.)