More supporters for the Umbrella Movement than may be obvious? 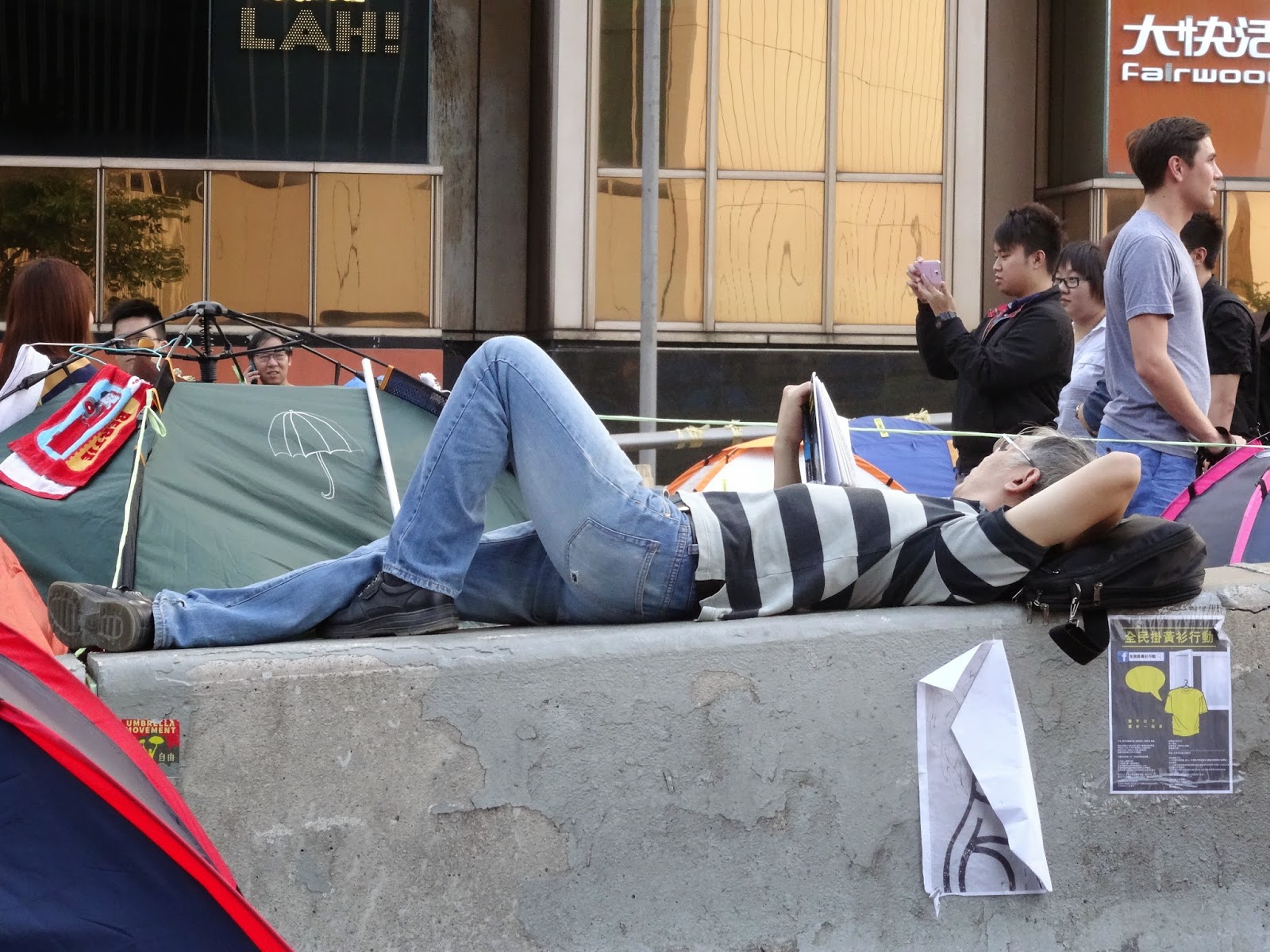 A gray-haired reader at Admiralty 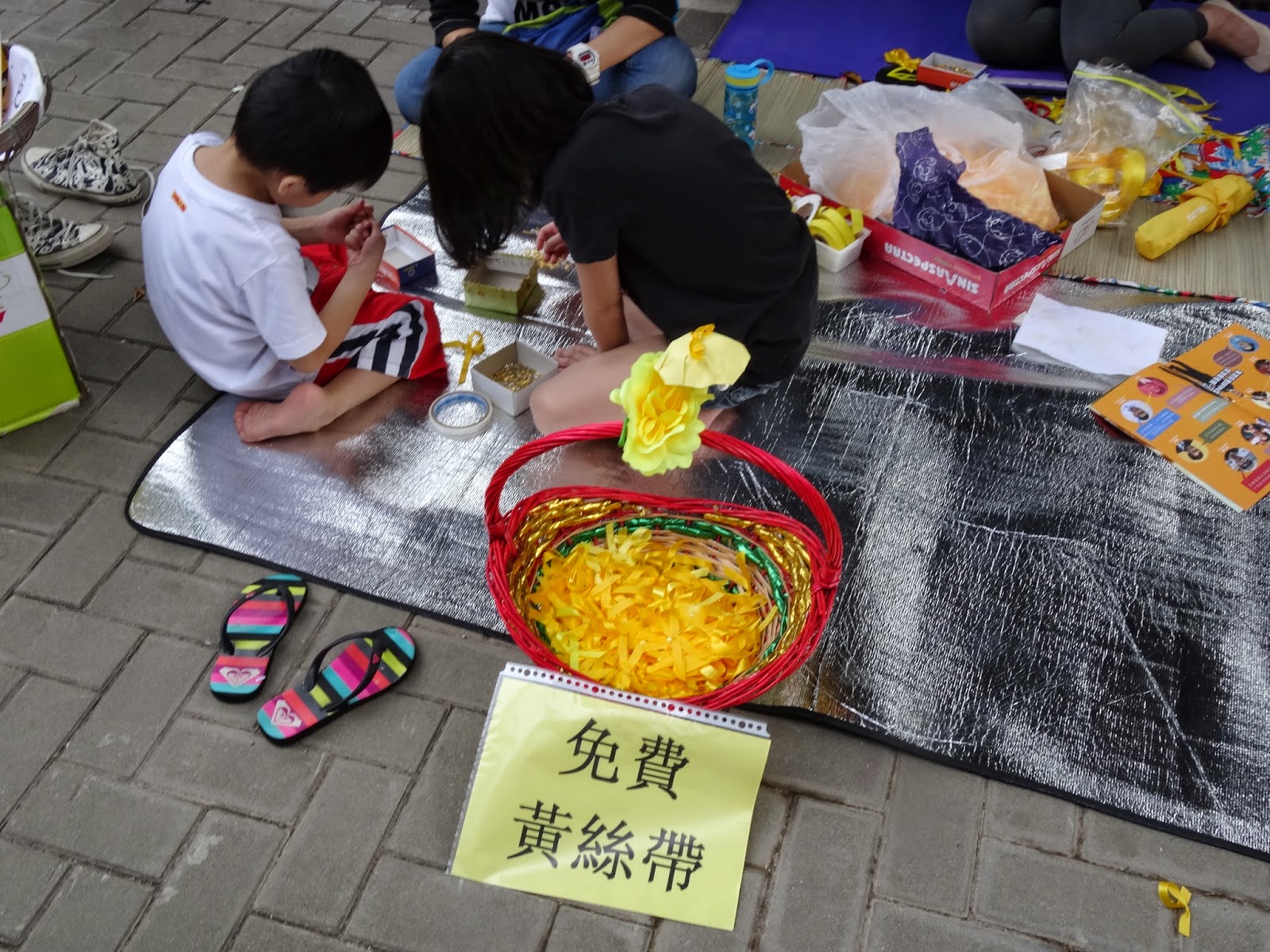 While out in Sai Wan Ho earlier today, I came across a pro-Umbrella Movement banner hanging out in the open.  The sight of it gave me a good feeling inside -- and all the more so because it didn't look like anyone had taken umbrage and decided to deface it, etc.


I also have to admit that I was surprised to see it as this is the first one I've seen in person outside of the protest areas (though, of course, I do know about the "I want genuine universal suffrage" banners that were hung from Lion Rock and, later, also at Tai Mo Shan, from Kowloon Peak and elsewhere).  In contrast, I've seen more than one of the actually anti-Umbrella Movement -- only they are too sly to explicitly state it -- Support Our Police campaign's banners still around in my neighborhood, days after those people stopped trying to collect signatures for their "petition".

Interestingly, as far as ribbons go though, I definitely have seen more people with yellow ribbons (on their clothing, backpacks and other bags, etc.) about in Hong Kong than those sporting anti-Occupy blue ribbons.  And this even though these days, the vast majority of people I've seen in the protest areas -- who I'd look upon as Umbrella Movement supporters -- actually don't wear yellow ribbons, and ditto re those of my friends and colleagues who I know support the Umbrella Movement too.

Coupled with the fact that a disappointingly large percentage of people I know -- both in Hong Kong and overseas -- still mistakenly assume that it's "just" students protesting in Admiralty, Mongkok and Causeway Bay (whereas the age range -- and that of occupations too -- is actually far greater) , I truly do get the feeling that there still are far more supporters for and of the Umbrella Movement than many people realize.
Posted by YTSL at 9:41 PM

another part of the problem is with hong kong society. Everyone seems to care only about making money, or just to survive and NOT caring about the rights being eroded to third-world (or second-class citizen) status.

I posed this:
If you lost your rights and your freedoms, what's the point of having a large amount of money if it is only meant a very guilded cage?

I hate to point this out but I think for certain Hong Kongers (and, actually, many Nanyang Chinese), the way they think is "if I have enough money, then I can go live anywhere I want". Money is what makes them feel secure, not having political rights -- because, let's face it, that's been the Chinese historical experience.

BTW, I noticed you wrote the exact same comments on The Fragrant Harbour's blog post about a different -- even if also Umbrella Movement related -- topic. And that she pointed out something I should have made explicit: not everyone in Hong Kong seems to care only about making money, etc. -- that's something the Umbrella Movement's showed, and is one of the things I really like about it.