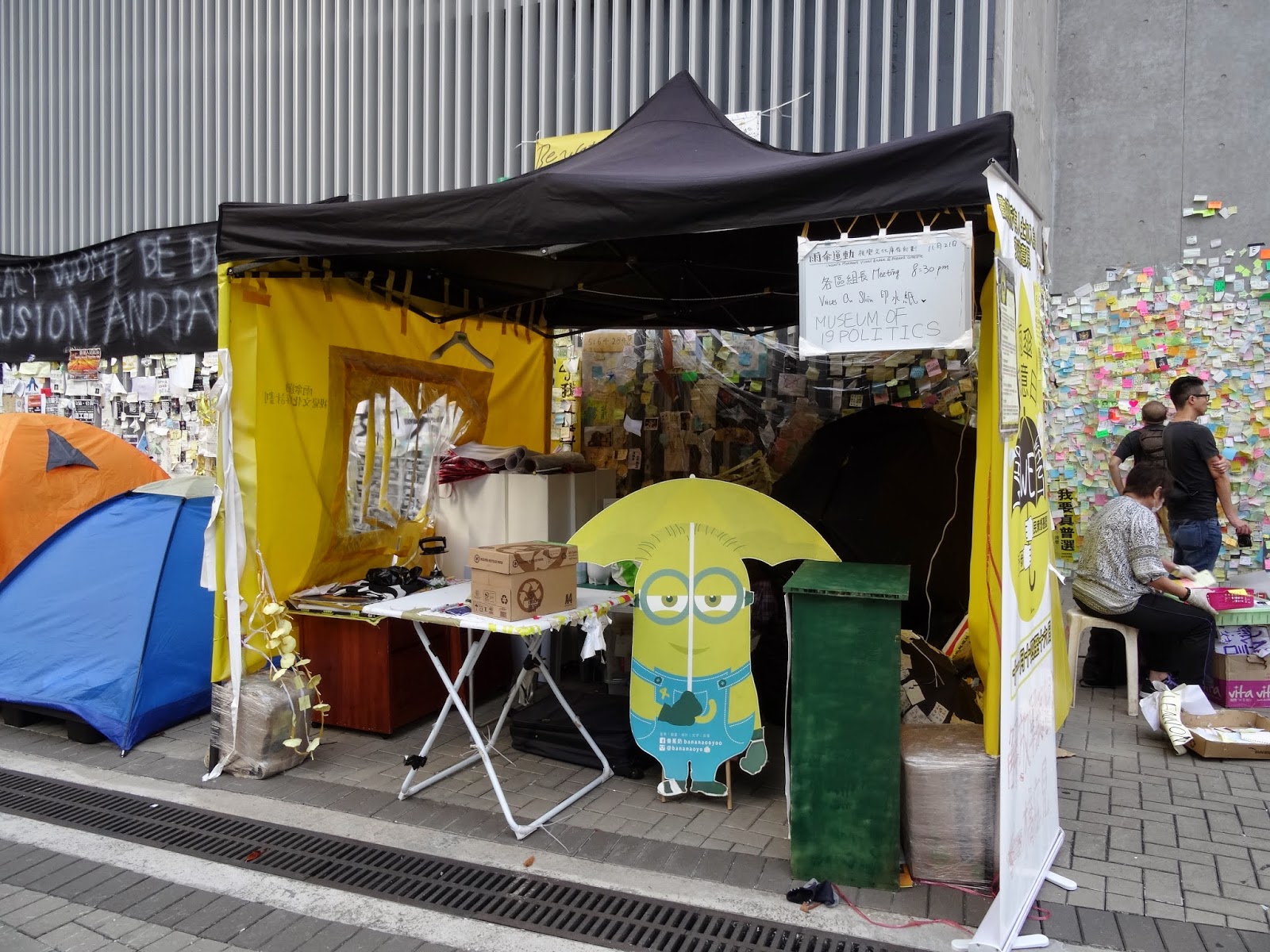 The Minion that used to stand in Tin Mei Avenue
is still at Occupy Admiralty! 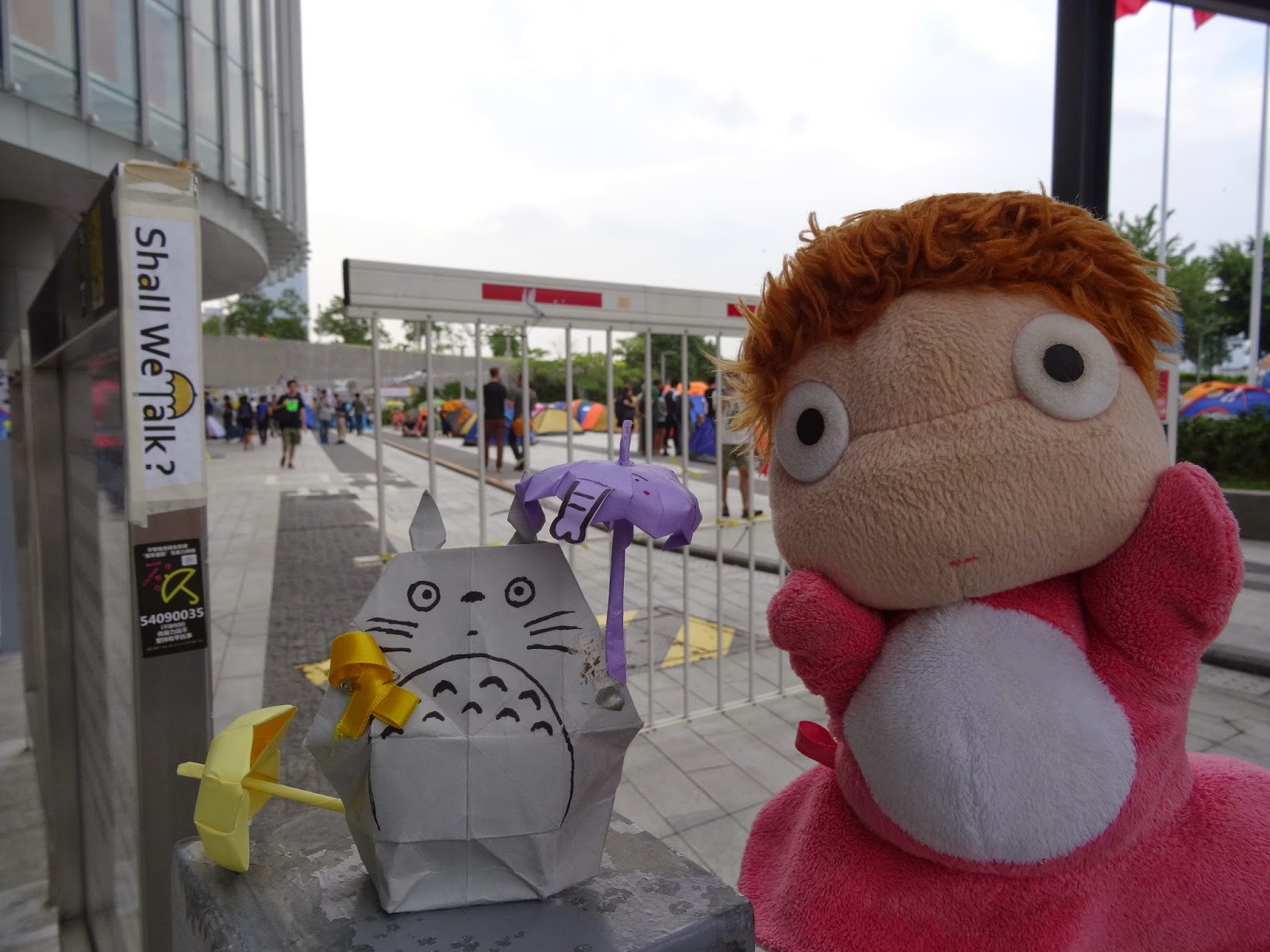 Gone, however, is the little Totoro (seen here with Puppet Ponyo)
that used to stand in front of the Legislative Council Complex :( 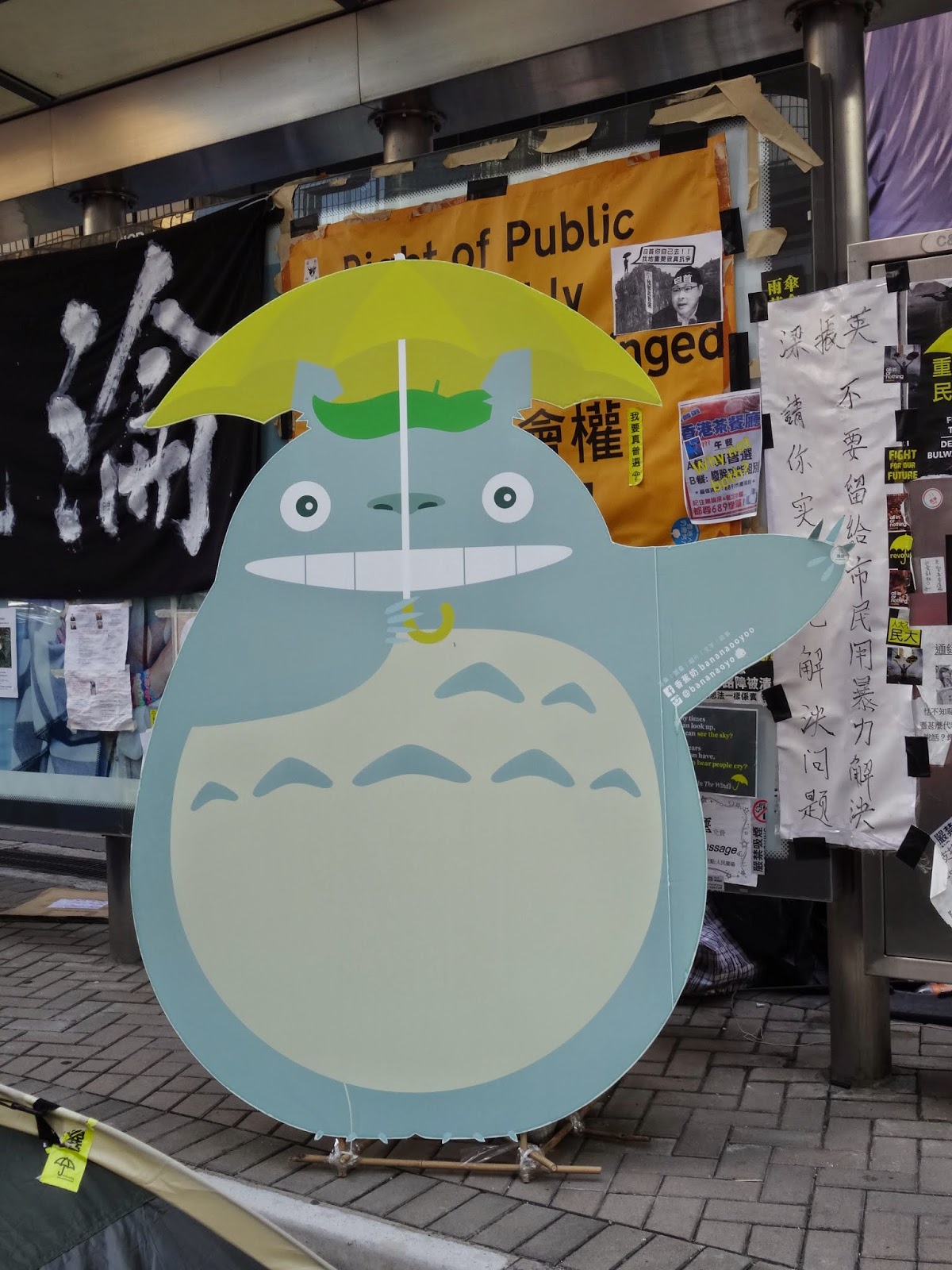 But the big Totoro with the wide grin is still
standing by the bus stop on Harcourt Road!

Pretty much ever since the Umbrella Movement got going, there have been people saying that the protesters should give up and go home.  Early on, those demanding that the protesters stop their Occupation were either those who either were virulently hostile against the pursuit of (full) democracy for Hong Kong or were sympathetic but feared -- and didn't want -- people dying for the cause.


Increasingly though, there also are a significant number of people who feel they have been unfairly inconvenienced for too long by the Occupation of major streets, and those who feel that the current protest techniques are not working, so maybe some other tactic should be attempted -- including withdrawing now of one's own accord (rather than because one had been forced to by the police or whoever else) and then regrouping later. And as much as some diehard Occupy protesters would want to deny it, there's a sense that those who want the protesters to leave are now in a majority.


At Admiralty today, however, the signs seem mixed -- even as far as the fates of certain inanimate characters that have come to be associated with it go.  For instance, the Umbrella Man has left the area -- reportedly, temporarily for maintenance purposes -- but a smaller version has turned up as proxy.  And while the small Totoro origami figure appeared to have been a victim of the clashes between police and those people who tried to break into the Legislative Council Complex early on Wednesday, the large Totoro cutout is very much still around -- and popular with photographers and other visitors to the protest site.


Then there's the case of the Minion that had been standing on Tim Mei Avenue until the area around the entrances and exits of Citic Tower were cleared by court order on Tuesday.  When I visited on Tuesday night and failed to spot it, I feared that it had been destroyed and thus gone forever.  But this afternoon, I was pleased to find it standing near the Lennon Wall!

Perhaps therein lies a lesson for the Umbrella Movement in general: that is, that people could act and look like they have withdrawn but, instead of giving up completely, it could just be a case of retreating and then regrouping and reappearing at another time and place.  Put another way: by all means don't give up the fight but perhaps the time has come to try a different tactic -- one that's more akin to Bruce Lee's famous "be water, my friend" injunction?
Posted by YTSL at 11:39 PM

Yeah, Minion for still being there.
Frivolous questions: Does Puppet Ponyo have a Yellow Umbrella? Were the people screen printing there again so you could have an T-shirt? I'm still enjoying your blogs.

And alas, I didn't come across anyone screen printing today. Have bought a plain T-shirt and am carrying it around for just in case I encounter people offering those screen prints again though!

Absolutely do agree that Bruce Lee's echoing of Taoist wisdom, "Be water, my friend," is the best strategy: to regroup and present themselves in another incarnation, a form that will keep the spirit of the movement alive. Good to see veteran traveler, Puppet Ponyo, someone who knows all about water and adaptability, witnessing history.

You refer to these images as "inanimate characters." Well, in my eyes, that are now part of a birth of animated interactive symbols, that will stay alive in the minds hopefully, among young and old. I know this is true because Puppet Ponyo told me so.

I figured you'd like the sight of Puppet Ponyo at Occupy Admiralty! But didn't realize that she and you had been in conversation... ;)

More seriously, talking to a protester who's been camping in the area today, he worried that if they leave without having achieved their goals, people will lose the will and commitment to protest like they've been doing for weeks now.

I can see where he's coming from but told him that I feel that there's a better chance of the Umbrella Movement and its spirit remaining alive if people withdraw from the protest areas when that's their decision to make, rather than because they're forced to do so.