Memories of -- and lessons from -- the (fall of the) Berlin Wall 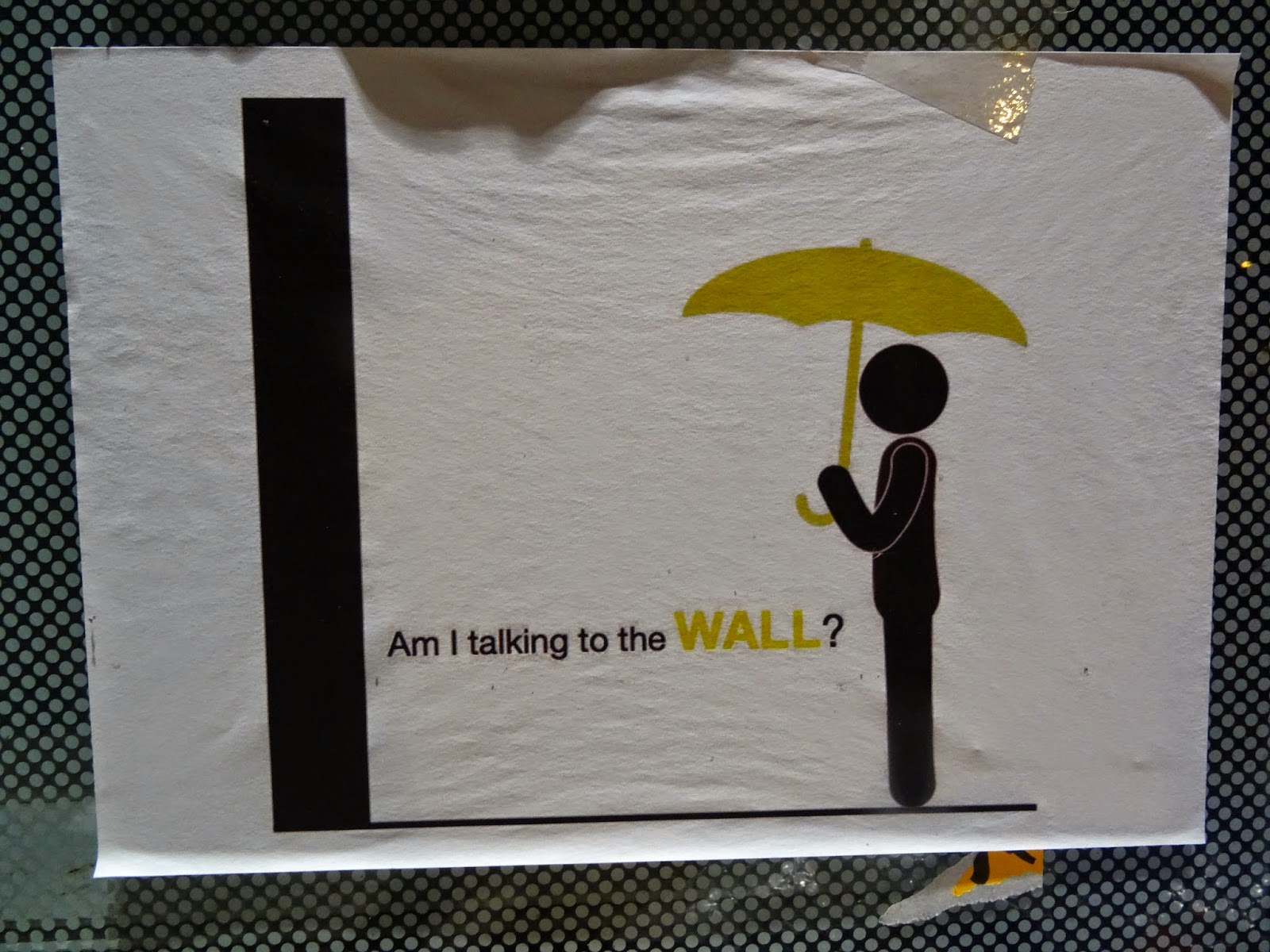 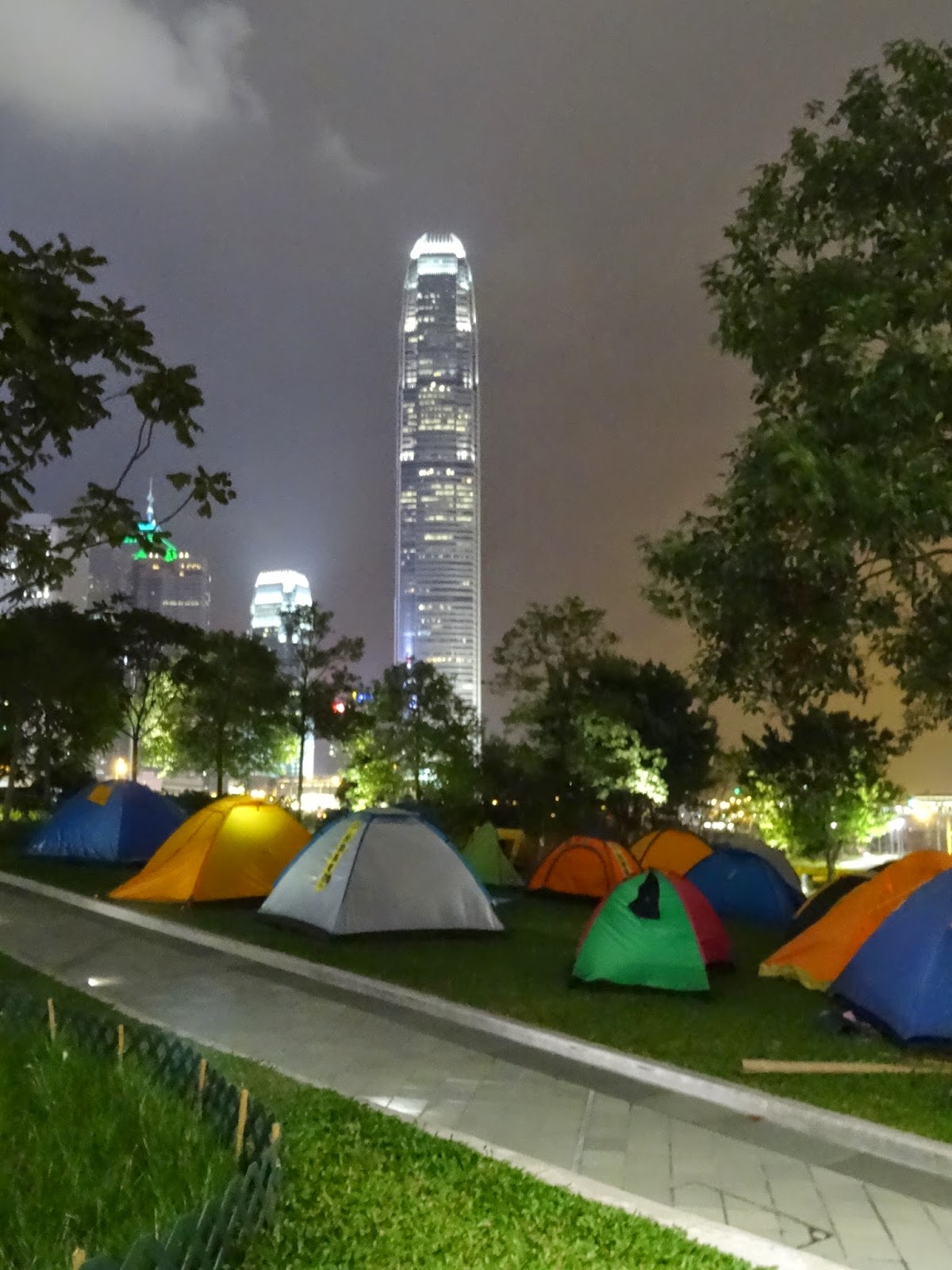 Who'd have thought even a few weeks ago that
we'd see a sight like this in central Hong Kong?

On November 9, 1989, I happened to be visiting German House, the special interest house for students interested in German language and culture at Beloit College, where I was an undergraduate, when news came that the Berlin Wall had fallen.
Twenty-five years on, I still remember the shock and euphoria that rippled through the house upon our hearing the news -- and my having been poured a glass of straight gin (which I found absolutely foul tasting, and had to ask for some 7-Up to mix into my drink!) to toast the occasion with fellow students who included friends from Japan and the Bahamas as well as Americans and West Germans!
As it so happened, I had visited West Berlin in the summer of 1989 -- and had seen and touched the Berlin Wall with my own hands.  While in Berlin, I also had been to the Reichstag and while I was  looking over the Berlin Wall to see the Brandenburg Gate and other landmarks that lay at the time in East Berlin, I heard violin music float over from the eastern part of the city to the western part where I was -- and I remember thinking how sad and ironic it was that the music could go from East Berlin to West Berlin but people couldn't freely do so.
If you had asked me at the time whether I could ever envision a time when the Berlin Wall would no longer divide the city, I'd have told you that I couldn't.  At that time, it seemed so very permanent.  And yet, fall it did -- and within just a few months from when I thought it'd be standing for a very long time, if not forever.
So... twenty five years on, here I am in Hong Kong -- where a socio-political movement that began seven weeks ago now is still going on.  Pretty much every week since it began, there have been various individuals calling for the Umbrella Movement -- or, at least the Occupy part of it -- to come to an end.  One reason some of these people give is that the protesters are inconveniencing others.  Another is that the protests are futile and doomed to fail.

With regards to the former: I don't think I can do much better than quote a sign I saw at Causeway Bay on Thursday -- "SORRY, blockage today is for no political blockage tomorrow".  As for the latter: as the example of the (fall of the) Berlin Wall shows, what seems impossible now can become possible at some point in the not too distant future.  Also, you never know if you don't try -- and people power sometimes can be very powerful indeed.
Posted by YTSL at 11:15 PM

I'm flip on walls. Look at what happening in Israel and Palestine.
When they took down Berlin wall it was the beginning of breaking down the middle class for people in the United States.

Re Israel and Palestine, and in general: having walls strengthens divides between people to my mind.

Re the other matter: It's funny, when I lived in the US, often times, people seem to feel like the US was in a world of its own. So I'm surprised to hear you ascribe the breaking down of the middle class to the events that began with the fall of the Berlin Wall.

I can personally relate to this blog because I visited Berlin on a train journey through Europe as a youth, terrified to be alone overseas for the first time...This was about twenty years before you visited (obviously I'm older than you)...After passing through the checkpoint into East Berlin, walking through the streets filled with dull Soviet architecture, studying the wall - I was relieved to pass back through the checkpoint into the neon of West Berlin...But even at night, walking through the streets of West Berlin, the wall appeared to be a very sinister structure which existed in a nightmare realm...Re-visualizing these European memories, I must admit that your night photo of Hong Kong's skyline does come as a relief after memories of the Berlin wall.

Thanks for sharing your divided Berlin memories.

The first time I came across the Berlin Wall, I didn't do so deliberately but found that a museum (where the Orientalist art exhibition I had gone to the city primarily to see -- I did my undergraduate art history thesis on that art!) that I had gone to visit was located near part of the wall.

Walking about in the area, I came across Checkpoint Charlie -- and, more, interestingly for me, the Topography of Terror. The latter was only established in 1987. If you ever return to Berlin, I'd highly recommend a visit there:-

Think of you... I know this has been a difficult time. I follow through the bits of news we get.
I think the Berlin wall is a lesson to hold onto. I have not been back to Berlin since the 80's. I would love to go and see the 'new' city!

Thanks for thinking of me and stopping by even though I'm not Photo Hunting these days. I haven't been back to Berlin since that summer 1989 visit either. Have been back to Germany though -- and maybe it's my imagination but the vibe definitely did feel different!