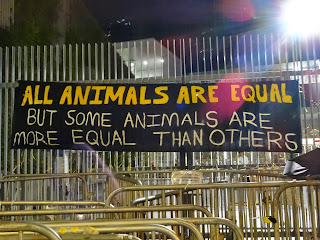 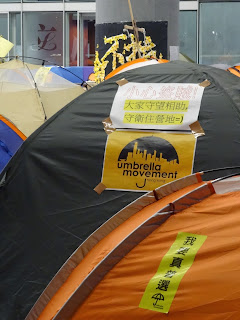 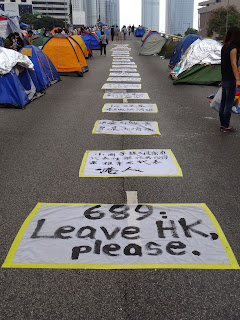 A plea many Hong Kongers would like to make

Years ago, when I was still living in the US, I was told something about Hong Kong which I had no reason to believe was untrue: i.e., that it was a place where the most admired man was not a politician (like, say, Nelson Mandela) nor sportsperson nor entertainment personality, as often is the case elsewhere in the world, but, instead, a rich tycoon.  Indeed, Li Ka Shing was held in such awe that he was nicknamed Superman by Hong Kongers!

Part of the reason this was the case, I was also told, was because many people saw Li Ka Shing's story as an aspirational inspiration.  A self-made man who came from humble beginnings, he was a teacher's son who came to Hong Kong as a refugee and was a salesman before, through hard work, building a business empire.

In recent years, however, things have skewed so much in favor of the already (mega) rich that no Hong Konger I know believes anymore that anyone could have the career path that Li Ka Shing followed all those years ago -- with the current political system in place being very much a part of the socio-economic problem.

And the particular irony here is that things have happened so quickly that often times, its people from humble beginnings but who are now part of the 1% -- like former policemen's sons Donald Tsang and Leung Chun Ying -- who appear to be very much at the forefront of those trying to bar other people's path to economic success or even just to a comfortable point in life which involves having a real career and owning a flat.

Put another way: these people seem to have come to think like the pigs in George Orwell's prescient Animal Farm: that all animals are equal, but some animals are more equal than others.

Looking back at recent history, I think it pretty interesting that when the Occupy movement swept the world back in 2011-2012, it wasn't a bigger deal in Hong Kong as in certain other parts of the world -- though having said that, the original Occupy Central did last for 11 months, making it one of the lengthiest Occupy movements in the world.

I think part of the reason is that for many people here, it seemed that the 2011-2012 Occupy Central was too much like a copy cat of what was going on elsewhere whereas, in contrast, the Umbrella Movement feels like a very Hong Kong thing -- stemming out of particular Hong Kong concerns and evoking responses that also are culturally distinctive.

And when many Hong Kongers (including what looks to amount to a whole young generation) no longer feel that they can pursue the very Hong Kong dream embodied by Li Ka Shing's non-fictional story, then, it truly feels, we've got a real problem -- one that, to rub salt to Hong Konger wounds, people clearly and strongly feel that 689 is not up to solving.
Posted by YTSL at 8:41 PM

HI YTSL -- it's the entire system that's broken... and how do you even begin the fix that when the government believes the city will not survive without tycoons?

YTSL, I concurrently agree with you and the entire system is broken, but the city WILL SURVIVE without the tycoons.

FragHarb, You have to start the fix somewhere as long as PRC and its tycoons are seriously held in check.

These are how can we get started.
- Start with 5 year moratorium on any private building on any land sales, repeat as necessary. (Basically, no land sales for anything but public/HOS/gov't/school/university buildings)

- Continue the current taxes and duties with building flats/real estate and apply them across to ALL properties, including commerical properties.

- Start by building public and HOS estates, restrict sales by HOS sales on secondary market by doubling current land premiums AND restrict HOS owners to sell on the secondary markets for 25-30 years (ver'sus 10 or 20 yearsnow)

- open up the market and break up the monopolies in the supermarket, utilities.

- Switch the HK tax system to progressive tax system with those who makes 4 million HKD/yr or more pay 50% tax on all income worldwide AND start estate tax of 50% for all estates above 15 million, no exceptions. upward adjusted for inflation.

- have ICAC investigate the likes of DAB for "rice/groceries for votes" during LegCo elections.

Re your suggestions/points: this brings us back full circle as to why the Umbrella Movement has targeted (as in been trying to talk to and change) the government, not the tycoons.

YTSL, you NEED TO READ CAREFULLY.

actually I am SPECIFICALLY TARGETING the TYCOONS for supporting the PRC below (this in addition to this. This give the tycoons two options, either build public/HOS estates or starve.

- Start with 5 year moratorium on any private building on any land sales, repeat as necessary. (Basically, no land sales for anything but public/HOS/gov't/school/university buildings)

- Switch the HK tax system to progressive tax system with those who makes 4 million HKD/yr or more pay 50% tax on all income worldwide AND start estate tax of 50% for all estates above 15 million, no exceptions. upward adjusted for inflation.

- open up the market and break up the monopolies in the supermarket, utilities. (to provide more non-PRC foreign competition.)

What you are asking for is pie in the sky material. Also, note: land sales are made by the government, etc. So like I wrote before: it goes back to the government, and why the Umbrella Movement has focused on talking to/changing them, not the tycoons per se.

what i suggest is not so much pie in the sky since the problem is the likes of CY Leung, Carrie Lam, and Regina Ip doesn't have the spine to do these for the people, hence reflected in their very low and dropping popularity scores (40's) when compared to Patten's (60's)

that's why I urge everyone to boycott patronage of any business owned by the tycoons sans the utilties.

In addition, I urge everyone register to vote to vote out the United Front (ie DAB, New People's Party, HK Fed of Trade Unions)

Also, BTW, from what I can see from the stats, most of this blog's readers/visitors actually are not from Hong Kong. So most of the audience here actually can't vote out the United Front, etc. (and thus would not be among the people you are trying to send your own messages to).