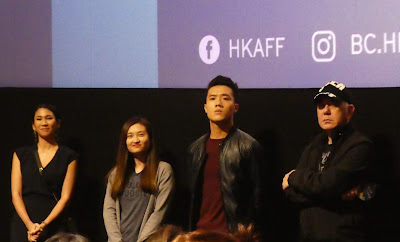 Back in 2011, a Hong Kong drama revolving around an older woman who had spent much of her life as an amah won many hearts and much critical acclaim.  After watching A Simple Life, a friend of mine told me she had been moved by it but also was moved to wonder if there ever would be a similar cinematic tribute to one of the too often underappreciated foreign domestic workers that have mainly replaced ethnic Chinese ones in many a contemporary Hong Kong household.

Seven years on, such a movie has indeed been made.  Still Human tells the story of a Filipino nursing graduate who goes to Hong Kong to care for a former construction worker paralyzed from the chest down as a result of an accident at a building site.  Allocated the room previously occupied by her boss's son (Wong Ting Him), who now resides in the US with his mother and stepfather, Evelyn Santos (Crisel Consunji) finds herself living in close quarters with Leung Chong Wing (Anthony Wong Chau Sang) in the small public housing unit that the divorcee calls home.
Initially, Evelyn and Chong Wing have problems even communicating -- because, among other things, she knows no Cantonese and his English language facility is by no means great -- but they manage against the odds to make things work, develop a bond and inspire each other to dream again.  As their relationship becomes more that of valued friends rather than strictly employee-employer, their common humanity is highlighted along with the realization that they are human beings capable of dispensing joy and also experiencing much happiness.

Although its overall story arc may not surprise, Still Human is fully capable of astonishing; not least by way of showing a number of beliefs that are widely held in its makers' home territory to be fallacious or even outright wrong.  On a related note: in view of its story involving societies whose cultures often make a big deal out of family ties, it's interesting to see people from different backgrounds portrayed as being able to connect, and sometimes be more sympathetic and understanding of one another than their blood relatives.
Like with A Simple Life, Still Human is the kind of movie whose beauty and genius lies in its details and ability to feel so very real.  And like with Ann Hui's film, this admirable offering from debutant director-scriptwriter Oliver Chan Siu Kuen (whose childhood love of Oliver Twist got her to adopt that male first name!) benefits enormously from having two fantastic leads (one of whom appeared to be making her first film appearance here!!) with great chemistry, and whose acting is wonderfully nuanced.

An incredibly intelligent film that delivers a number of important messages and also makes many salient points, it is a work that speaks to the heart as well as wins minds.  Replete with moments that get people laughing out loud, Still Human also will move viewers to tears.  For the record: I'd go so far as to state that the screening I attended of this absolute crowdpleaser elicited the most and loudest sniffles from an audience I've been in since I went and watched The Joy Luck Club some two and half decades ago!