Such a privilege to see Kenji Mizoguchi's The Story of the Last Chrysanthemum on a big screen! (Film review) 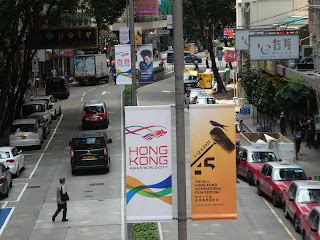 Hong Kong International Film Festival ambassador's film
pulled out of the fest?  Never mind, on with the show!
The Story of the Last Chrysanthemum (Japan, 1939)
- Part of the Hong Kong International Film Festival's Shochiku Cinema: 100th Anniversary program
- Kenji Mizoguchi, director
- Starring: Shotaro Hanayagi, Mori Kakuko
In 1939, the Second World War began in Europe.  Although Japan did not officially enter that war until December 1941, it already was deep into a militaristic phase, had become embroiled in the Second Sino-Japanese War and nearly caused hostilities to break out between it and Britain in the northern Chinese treaty port of Tientsin (modern day Tianjin).
That same year, Kenji Mizoguchi made The Story of the Last Chrysanthemum.  In Donald Richie's A Hundred Years of Japanese Film, it is reported that the Japanese master filmmaker escaped into history -- by making period dramas like this one centering on a Meiji-period kabuki actor -- to avoid the demands of the troubled past.  But rather than make an escapist work, Mizoguchi -- true to form -- produced a somber tale that mixed tragedy with triumph while highlighting that true love, be it of an art form or another individual, requires major sacrifice.
Among David Bordwell's many observations about Mizoguchi are that "he is easier to admire, even to worship, than to love. His films, though visually sumptuous, can be somber and bleak. Often unremitting tales of suffering, they lack humor (though not irony)."  A viewing of The Story of the Last Chrysanthemum will provide ample proof of this.
Yet, at the same time as I found myself bowled over by Mizoguchi's technique -- including the amazing long takes that are full of so much detail and color (the latter metaphorically speaking, of course, since this 1939 work is a black and white film) -- I also did find myself also getting sucked into the tale of the annointed heir to an illustrious kabuki lineage who required the honesty and devotion of a woman working in his adopted father's household along with hard times in exile to grow and become a truly fine actor and more mature man; and so much so that, in the 142 minutes that I viewed this film, they became real people to me rather than mere characters in an 82-year-old cinematic work set even further back in time.
It has been said that Mizoguchi identified with the women in his films.  Perhaps that's why one can't help but sympathize -- even if maybe not empathize -- with Otoku (played by Kaku Mori), the film's main female character who had the misfortune to be of a lower social standing than the man whose attention she caught and and thus was seen as his downfall by others even while she actually was his inspiration.
This having been said, I can't imagine this drama working as well as it does without its leading man: a stage actor turning in a bravura performance in his film debut.  Shotaro Honayagi was tasked with playing Kikunosuke Onoe, a man who goes from a callow, pampered youth to a seasoned performer able to draw on the experience of years of financial along with psychological hardship -- and he rose to the demanding task.  As an added bonus: The Story of the Last Chrysanthemum also features one breathtaking sequence showing him performing on stage that could be one enthralling show by itself.
Almost needless to say, this Mizoguchi masterpiece stands the test of time -- like every film I've seen from this filmmaker to date.  It's such a pity that so many of his works have been lost/destroyed and also that many of them are not all that accessible.  So if there's a chance to see them, especially on a big screen (like they were made to be seen), it really is worth making the effort to do so!
My rating for this film: 9.0
Posted by YTSL at 5:53 PM

I am reading a book about Japanese period films titled The Japanese Period Film by Thornton. Reading it slowly because I have 4 other books going but the first couple chapters are interesting in what she says about how attire, body language and hair cuts can tell you about the status of the characters in society. Very structured and breaking the rules for the underclass could lead to death - such as wearing wooden clogs which only the samurai class could wear,

"attire, body language and hair cuts can tell you about the status of the characters in society". Isn't this common knowledge and applicable to most any society?

Out of curiosity, I looked up that book you're reading and found a review that states the following re it:-

"“How does one summarise this book?” The answer is that this academic text indeed recognises the shortcomings of the existing scholarships on Japanese period films. It represents a theory, criticising present in terms of the past, to fill the gap in other academic books. It gives evidence for supporting the represented ideas in the book, but unfortunately it fails in some of its arguments. This is partly due to its structure, which gives much unnecessary information. There is no doubt that Thornton has a vast knowledge on the subjects of Japanese cinema, culture, history and society. The magnitude of books, articles and films that she uses as sources is genuinely fascinating. But sadly this passion in some passages turns to a dangerous obsession that blinds her to the lack of strength in some of her key arguments. Thus, it is often the case that the thinking behind the book is lost in the immense amount of information.

"As a final verdict on the book: this is a must-read book for film scholars or film students who are interested in Japanese period films. However, in using the book, the reader should absorb the information and ignore some of the arguments and form his or her own instead."

Yes but I don't know what they are re Japan of a few hundred years ago. Now I have some small understanding. Just interesting to me. It is academic. That is often a negative when reading about films ie you know who in HK. But I am just reading it a but at a time and so far so good. I have read about the periods to understand better the context but this should help.

Interesting to me too -- though I think I learned about those particular Japanese cultural things via watching lots of Japanese period films and visiting museums, historic homes, etc. in Japan rather than academic film books! ;)

The only academicky/serious Japanese film book I have is Donald Richie's "A Hundred Years of Japanese Film" but wouldn't 100 percent recommend it as I find it too idiosyncratic. I'd love it if Mark Schilling were to write a Japanese cinema book. Don't think he has so far though.