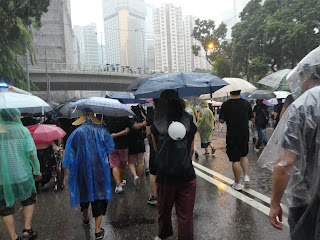 Walking along undaunted, complete with balloon eye,
70 days on from the mega protest march that
kicked off this summer of protest in Hong Kong 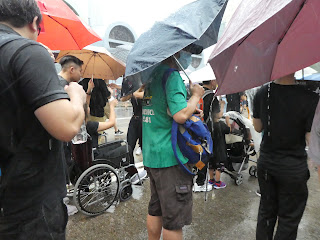 Holding firm amidst the deluge, confident that the
storm would soon blow over and calm skies return
I had agreed to meet with a bunch of friends at 2.15pm outside Tin Hau MTR station to get into Victoria Park for the extradition bill-themed protest rally that would officially get going there at 3pm yesterday. With trains bypassing the station from time to time (because the station had become super crowded with people intent to on getting to the same destination) though, more than half of the group ended up getting there late -- with one friend telling us that the closest she figured she would be able to make it to was Causeway Bay, over on the other side of the park.
As the minutes ticked by and it got close to 3pm, those of us at Tin Hau realized that the lines to get into Victoria Park had stretched past where we were standing and the crowd was overflowing into the nearby streets.  Rather than stay put and risk being squashed by others, we decided to go with the flow and join the crowd -- partly in search of a more accessible entry point into the park and also with a vague idea of meeting up with the one friend over in Causeway Bay.


Shortly after we made our move, the heavens opened and we had the kind of downpour that we joked had far more water pouring heavily onto us than the police's new water cannons would ever be able to  While a few people elected to make for cover, most people already on the road stood resolute in the storm -- with pretty much everyone equipped with umbrellas to shelter under.

While standing on the road and under my umbrella for what seemed like an eternity, I looked to my left and caught sight of a plastic-covered baby stroller belonging to a family who had decided to bring at least one child along with them to the protest -- a decision that I wager is far less uncommon in Hong Kong than most other parts of the world.  Also spotted nearby braving the storm was a woman in a wheelchair holding an umbrella for the man wheeling her.

I'm not going to lie: The sight of those fellow protesters made me choke up. And tears are coming out of my eyes again as I write this.  So here's throwing out a couple of lighter observations from yesterday.  Firstly, there sure were a lot of kawaii umbrellas at yesterday's protests -- with the visages of Totoro, Hello Kitty, Kumamon, Doraemon and Winnie the Pooh among my spottings.

Secondly, I must confess to finding a Twitter thread of protest anecdotes started in the wake of yesterday's peaceful, feel good mega protest to be charming as well amusing.  And it really is so very Hong Kong to learn about the middle-aged protester who was overheard telling the woman next to him (who chances are pretty high was his wife): "This is the most radical I have ever been in my life. I am marching on a road"! :)
Posted by YTSL at 10:37 PM

Thank you for the updates.

Good luck to you all and I hope that all these peaceful protest will obtain positive results for the people of Hong Kong.

I have seen photos of all the umbrellas shot from high above on twitter and it stirred my heart.

Thank you for reading my posts.

Re positive results: the early portends from Carrie Lam still are not good but there have been surprising statements from some others that could be seen as heartening. E.g., the one I'm linking to below:-
https://www.scmp.com/news/hong-kong/politics/article/3023485/hong-kong-protests-need-political-solution-and-should-start