Ruan Lingyu shines in The Goddess but, alas, it's not enough to make me love it (Film review) 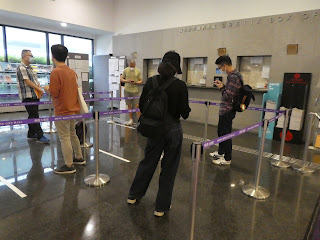 A measure of film fanaticism can be seen by there being
people willing to go queue for HKIFF tickets
at the box office up to an hour before it opens! ;b
The Goddess (China, 1934)
- Part of the Hong Kong International Film Festival's Chinese-language Restored Classics program
- Wu Yonggang, director and scriptwriter
- Starring: Ruan Lingyu, Li Keng (AKA Lai Hang), Zhang Zhizhi
I'm going to state it from the onset: I wish I liked The Goddess more.  If nothing else, it'd give me greater credibility as a filmophile since this 1934 offering is considered to be a sterling representative of China's cinematic golden age and stars Ruan Lingyu, the tragic luminary whose story I learned about by way of viewing Centre-Stage (AKA Actress), Stanley Kwan's 1992 biopic of this Shanghainese actress who already was an established star of the silver screen when she committed suicide at the age of just 24 years.
This film was by no means the first in which I saw Ruan Lingyu in action.  Stanley Kwan included clips of her in action in Centre-Stage -- and watching The Goddess, I got to realizing/remembering that they include ones from this particular offering.  At a previous Hong Kong International Film Festival, I also viewed Little Toys (1933), in which she shone brightly indeed.
And Ruan is luminous in The Goddess too -- giving a brave performance as a Shanghai-based single mother who makes her living by being a lady of the night.  (The film's title refers to Shanghai's euphemism for prostitutes, who at the time accounted for approximately 1/13th of the city’s female populace.  Hence its earning a reputation for being Whore of the Orient!)
The reason why I dub it a brave performance is because she (and the director) appeared to aim for realism and also a non-judgemental approach rather than for such as her bearing her breasts (which she doesn't, actually) or appearing in a sex scene (which, again, she doesn't do in this movie!).  And it's interesting that The Goddess focuses more on showing its titular character interacting with her young son (played by Li Keng) than any of her clients.
At the same time though, I can't help but think that this drama shows its age by way of an overly simple and predictable story arc that throws up obstacles in the way of her and her son's happiness in the form of a nasty, uneducated man who takes advantage of her (Zhang Zhichi's villainous character is such a stock part) and critical other mothers who openly disapprove of the way she makes her living who are way too one-dimensionally drawn.  Honestly, it's actually a shock to realize that this film and Fritz Lang's You Only Live Once (1937) were made only three years apart -- and not just because the former is a silent movie and the latter a talkie!
Actually, when I come to think about it, there's a strain of Chinese cinema that is unduly fond of moralizing -- found less so in newer Hong Kong and Taiwanese movies but definitely still there in Mainland Chinese films.  And this kind of moralizing, together with a tendency to make characters overly good or bad, is something I don't particularly care for.  Which is why I couldn't and didn't take to The Goddess even while still being able to recognize why there are others who really hold it high esteem.
My rating for the film: 6.0
Posted by YTSL at 11:04 PM

Shanghai was some fun place back then! I watched a documentary called Sin Cities a few years back. All during the 20s and 30s. Paris, Berlin and Shanghai. Fun fun fun till Hitler and Japan came along.

Fun for some, hell for many others.