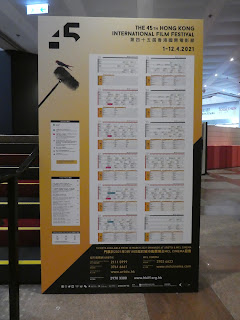 Yes, the Hong Kong International Film Festival is indeed
taking place this year -- albeit with a smaller program than usual
Women (Hong Kong, 1985)
- Part of the Hong Kong International Film Festival's Stanley Kwan, Filmmaker in Focus program
- Stanley Kwan, director
- Starring: Cora Miao, Chow Yun-fat, Cherie Chung, Elaine Jin
Sometimes miracles do happen.  Despite a pandemic still raging and Hong Kong continuing to be afflicted with more than its fair share of political trouble (that's even spilt over into the film world and the fest itself), the Hong Kong International Film Festival (HKIFF) is indeed taking place this year.  I'm making no promises that I'll end up doing it -- since certain things may crop up over the next couple of weeks or so that I think will be more important to cover -- but I'm currently aiming to write about every one of the cinematic offerings I'll be viewing for the first time over the course of the fest.
Rather than begin my HKIFF-ing with a world or, at least, international premiering movie (like was the case back in, say, 2019, 2018 and 2017), I opted this year to watch the feature film debut of this year's Filmmaker in Focus.  Stanley Kwan's Women had its original theatrical release back in 1985 and there is no doubt that parts of it can come across as dated-- not least that decade's clothing and hairstyles that really have not aged well at all!  There also are some scenes in which the actors and actresses are arranged in an overly-stagey manner that I could not imagine seeing in a later Stanley Kwan movie (e.g., 2019 HKIFF offering, First Night Nerves).
At the same time though, for better or worse, the story of the main character in Women is one that I could still see playing out in Hong Kong today.  After eight years of marriage to the rakish Derek (Chow Yun-fat, looking so young and handsome), put upon Po-yee (Cora Miao) discovers that he's been having an affair with another woman (Cherie Chung) and demands a divorce from him.  Taking her young son Dang-dang (Leung Ho-leung) with her, she moves in with her mother (Lee Ngan).
Readjusting to life as a unattached woman, she finds commiseration and camaraderie in the "forever happy single women’s club" led by her friend Lin-lin (Elaine Jin).  However, as Po-yee soon finds out, the spinster's club's name is a misnomer -- since the majority of its "members" don't seem that happy to be single and are on the hunt for partners.  And even while she's not actively looking, her friends try to find her a new man, only to see the most promising one fail after she bumps into Derek and his free spirit of a lover -- who turns out to be very much the opposite of her in character; something which frustrates and infuriates Po-yee all the more.
At one level, the view presented in Women appears to be that a woman is happiest when partnered.  The implication also seems to be that, while men are expected to do the "chasing", women are expected to cater more to the men once they enter into a relationship.  But Stanley Kwan's treatment of the main relationships in the film appears more questioning than accepting of these norms.  In so doing, he made this late era Shaw Brother production into a more forward looking work than it appeared to be the case at first glance.
In a foreshadowing of what was to come later in his career, Kwan also infuses Women with a broader outlook by including characters who are homosexual and bi-sexual.  For added measure and spice, he also threw in a discussion that suggests that an older woman-younger man partnership might work better than the more conventional older man-younger woman pairing -- pretty revolutionary for 1980s Hong Kong, I'd imagine!
Speaking of revolutionary, the following lines are exchanged at one point in Women:
"I have good news."
"What -- Hong Kong's not going back to China?"!

I guess it's a sign that people here still retain their sense of humor that this exchange brought upon the loudest laughter of the evening.  More than incidentally, there's more than one reference to 1997 in this 1985 movie.  So much for Hong Kongers being apolitical prior to 2019 or even 2014!

Well you can hardy blame him for having an affair with Cherie Chung! She was his go to actress!

Have you seen "Women"? Would be interested in getting your view re Cherie Chung's character in it -- and Chow Yun-fat's too! :D