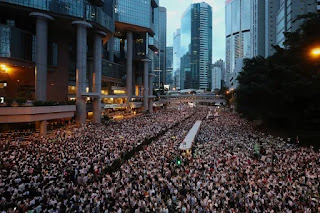 "One year ago, on June 9, over 1 million Hong Kong people marched against a government attempt to legalize extradition from Hong Kong to mainland China. Three days later, 100,000 surrounded government headquarters, preventing the Legislative Council from meeting to pass the legislation. On June 16, 2 million marched, the largest protest in Hong Kong history." So began a piece written by Kong Tsung-gan up on the Nikkei Asian Review website today.

Before then, 12,000 Hong Kongers had taken part in the first protest march against the planned China extradition law on March 31st and even more people -- I've seen estimates over over 120,000 -- answered the call to protest this dangerous piece of planned legislation on April 28th. (That many observers deem the anti-extradition bill protests to only have begun on June 9th (cf Verna Yu's otherwise excellent piece in The Guardian) -- makes it seem that at least 1 million people need to go out protesting in Hong Kong (population: 7.4 million) before people will take note!)


Kong Tsung-gan went on to detail in his article that: "In September 2019, Chief Executive Carrie Lam announced the withdrawal of the extradition bill. That was a major protest victory. But protesters have four other demands: an independent commission of inquiry to investigate rights abuses; an end to the prosecution of protesters; an end to the false labeling of the protests as "riots"; and genuine universal suffrage in the elections of the chief executive and Legislative Council of the Hong Kong."

As the article also notes: "None of those four reasonable and moderate demands -- all of which have the support of the majority of Hong Kong people, as repeatedly shown in opinion polls and November's landslide pro-democracy victory in District Council elections -- has been met."  And if that's not bad enough, Hong Kongers now also have to contend with the "national security" law that the Chinese Communist regime is imposing from afar and above.

There's an old Chinese saying, dating back to imperial times, about the emperor being far away which has been taking to mean that the central authorities have little influence over local affairs.  Unfortunately, it is not proving to be the case with regards to the current Chinese regime and Hong Kong.

One more quote here from Kong Tsung-gan: "That it resorts to enforcing loyalty is an indictment of its 23 years of rule in the territory. Hong Kong slipped out of its grasp long ago; the [Chinese Communist Party] can no longer regain it using consensual means. A whole generation of young people rejects the CCP imposing itself on Hong Kong; that is resistance the regime must contend with for years to come."

As Verna Yu quoted a Hong Konger -- Mainland Chinese-born but a Hong Konger all the same -- stating: "We weren’t fighting for much, we just wanted Hong Kong to remain Hong Kong and not turn into just any Chinese city... We want to have dignity and basic rights. As the Chinese [and Hong Kong's] national anthem says, not to become slaves."

As another Mainland China-born Hong Konger interviewed by Yu shared, "“We know we can’t fight against China but now we have forced China to show its true face to the world."  So, one year on, did the Hong Kong protests achieve anything?  (The title of Kong Tsung-gan's piece in the Asian Nikkei Review.)

His take on this shows that going up against the Chinese Communist regime may not be as fruitless and doomed to fail as too many people are wont to believe:


The Hong Kong people have repeatedly stood up to the [Chinese Communist Party] and won. In 2003, we beat back its first attempt to impose a national security law. In 2012, we defeated the introduction of a "national education" subject in schools, which the CCP said was intended to inculcate "patriotism" in schoolchildren but which many regarded as Communist brainwashing.

In 2014 and 2015, we blocked the fake universal suffrage from being foisted upon the city. And, of course, in 2019, we stopped the extradition bill. All of these victories were achieved primarily through protests.

No one expects that we can prevent the CCP from simply inserting whatever legislation it wants into the Basic Law, as it is about to do, but based on our track record, don't count us out too soon.