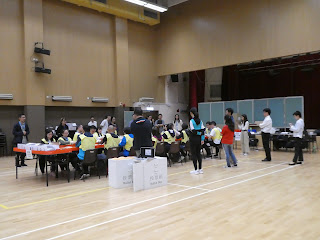 What I went to witness late last night 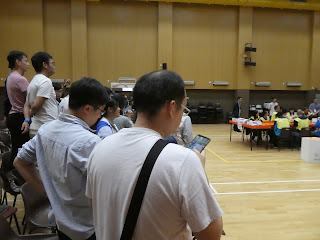 I was far from the only person who made the effort, and
found it all to be a riveting -- and, at times, tense -- watch 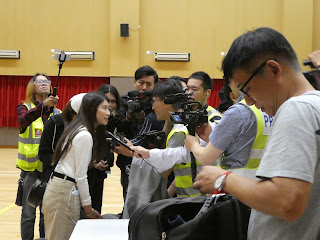 The winning candidate talks to the press :)


The people have spoken and their verdict appears to have come as a huge shock to Beijing.  Various reports have it that Beijing genuinely thought that the pro-Beijingers would win big in Hong Kong's District Council election.  Hence its allowing what essentially was a referendum on the Hong Kong government as a whole (and its Beijing overlords) to proceed as scheduled.


If truth be told, I too have been in shock -- but happily so in my case! -- for much of today by the size of the pro-democrats' election triumph (and people's public rebuke of Carrie Lam's government).  After all, it's really pretty uncommon to see close to 90 percent of the contested seats go to the opposition; and all this in spite of allegations of voter fraud and foul play on the part of the pro-Beijing camp!  Add to this a whole slew of big name pro-Beijing politicians losing their seats, often to young people making their first bid to enter political office at this level, and it all can feel like one's hallucinating what's going on rather than it being really true!

It doesn't help that I ended up suffering a bit from sleep deprivation on account of not only going and watching the votes being counted at my local polling station -- and consequently being there to witness live my chosen candidate being proclaimed the winner of a seat that a pro-Beijinger had taken uncontested the last time around -- after writing up yesterday's blog post but then staying up for several hours afterwards to watch the results being delivered.   But such was my initially disbelief at what turned out to be a veritable tsunami of wins in favor of the pro-democrats that I ended up staying until the number of seats they won got past the 200 mark before I could relax enough to feel able to go to sleep!


Even before the final results (of 388 seats to the pro-democrats, 59 to pro-Beijingers and 4 to Independents) were announced, people were celebrating, as a friend suggested on Facebook, like Hong Kong had won the (football) World Cup!  Bottles of champagne were popped after news was received of Junius Ho having been vanquished by pro-democrat Cary Lo.  And the champagne flowed again -- this time, including those from at least one bottle of Dom Perignon! -- at a pro-democracy protest turned celebration in Central this afternoon!


Amidst all the joy though, thoughts also did turn to the continued siege of PolyU and the people still trapped on its campus.  While it remains to be seen if they are successful in getting those trapped out in one piece and free of riot charges, I consider it very much to the credit of the newly elected District Councillors that they made it a priority to gain access to it this afternoon and have done so.

In addition, thoughts did turn to those who have already sacrificed so much to the pro-democracy cause.  And while I couldn't help but smile and laugh a lot today, I shed a few tears too: particularly after coming across the following illustrated story (for which the word "comic" can seem like a misnomer).
Posted by YTSL at 11:59 PM