Mourning as resistance in under siege Hong Kong 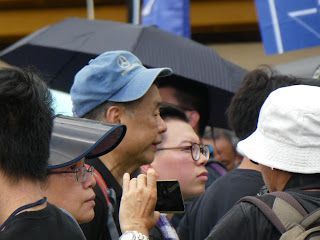 A well known face in the crowd at the 2 million (plus one)
anti-extradition bill protest march on June 16th, 2019 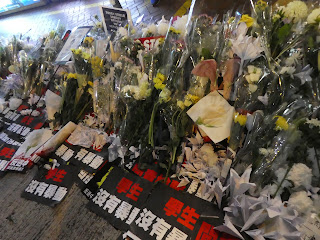 Some of the tributes to the "plus one" laid out
at Pacific Place that evening
There are certain events that take place over the course of one's life that have the kind of impact on you that makes it so that you can vividly remember the circumstances you were in when you first heard about their having occured.  For me, they include the death of John Lennon, the Challenger explosion, the Tiananmen Square massacre, the fall of the Berlin Wall and 9/11.  And, even while it's far less known than all those previously mentioned events, the fall to the death of anti-extradition bill protestor Marco Leung Ling-kit on the eve before a planned protest march that would turn out to be the largest ever in Hong Kong history.
To this day, it is not known for sure if the man looked upon as a martyr to the cause accidentally or deliberately plunged to his death outside the Pacific Place mall in Admiralty that night.  What we do know is that he was there to protest; and that the messages he had written on a banner he sought to hang from that building included the following calls: “No extradition to China”; “Fully retract the bill”; “Carrie Lam to step down”; and “Help Hong Kong.”
On June 16th of last year, many people who took part in the mega protest march against the proposed China extradition bill made their way to Pacific Place to place tributes to Marco Leung after they ended their multi-hour march at Admiralty.  And this evening, thousands of people queued for hours to pay their respects to him at the same venue on the one year anniversary of his death.
Tributes also appeared to him at other venues this evening.  And before their second court appearance this afternoon, the 15 pro-democracy figures whose arrests this past April shocked Hong Kong observed three minutes of silence for Marco Leung.  In addition, many of those who went to the West Kowloon Magistracy to support them wore white ribbons in memory of Marco Leung -- and I noticed that Figo Chan was wearing a t-shirt commemorating the "2 million plus one" march at his court appearance today while another of the 15, Jimmy Lai, tweeted a tribute to "the Yellow Raincoat Man" this evening.
With its propensity for wearing colors associated with mourning and marking anniversaries that involve deaths, the anti-extradition bill turned pro-democracy protest movement may come across as tending towards the morbid to some.  Undeniably, we often do find ourselves doing such as mourning the death of "one country, two systems" and even Hong Kong itself.
But strange as it may seem, this mourning can also be seen as a refusal to die -- or capitulate to Beijing and its lackeys.  For, remember, the Chinese Communist regime won't allow the Tiananmen Mothers and others who lost loved ones on June 4th, 1989, to publically mourn in peace.  So call it a weapon of the weak if you will but, yes, mourning in Hong Kong -- including, but sadly no longer exclusively, on June 4th -- these days also has become yet another form of anti-government resistance -- and act of solidarity with fellow pro-democracy activists and supporters for good measure.
Posted by YTSL at 11:59 PM