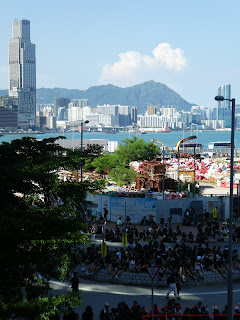 What a beautiful day it was in Hong Kong
today weatherwise... 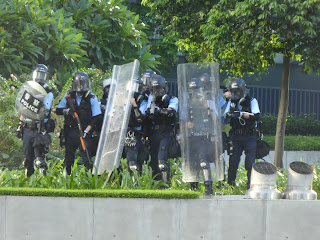 Sadly, men with guns spoiled the day
for thousands, if not millions, of people 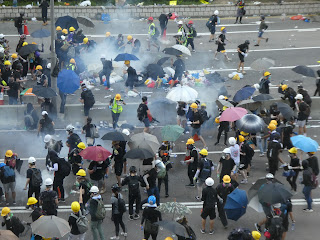 Tear gas at Admiralty once more this afternoon


Protesters had been calling for a general strike to take place in Hong Kong today as yet another way to push for the withdrawal of the proposed extradition bill, investigate the police for police brutality, a total recall of the claim that the protests of June 12th constituted a riot, have a blanket amnesty for all extradition bill protest participants who have been arrested, and for Chief Executive-in-Name-Only Carrie Lam to step down.  And things appeared to be going to plan when effectively the entire MTR system was shut down this morning and many flight cancellations as well as delays came about, thanks in no small part to air traffic controllers taking sick leave enmasse today.


Also announced weeks ahead were rallies at seven different points in Hong Kong, all of which had received letters of no objection from the police.  Shortly before 3pm, I set out to take part in the one at Admiralty.  Seeing as it was a beautiful day out, I decided to travel overground by bus but I ended up abandoning this option after the bus I was on got stuck in a traffic jam about midway, no thanks to such as at least one driver getting out of his car and abandoning it right in the middle of the road!


While walking over to Admiralty, I noticed that a significant number of businesses had closed and/or shuttered their entrances, including branches of banks.  Upon getting closer to my destination, I also saw that roads had been blocked off to vehicular traffic and people were walking along and milling about on sections of Gloucester and Harcourt Roads.

After getting to my destination, I met up with a friend and initially decided to head over to the grassy area by the Government Offices, only to find it super crowded -- hence many people having overflowed onto Harcourt Road nearby.  With my friend never having been to this part of Admiralty before (she had not taken part in the Occupy 2014 part of the Umbrella Movement and, in fact, only went on a protest march for the very first time this past July 1st), I decided to take her around and show her such as the Lennon Wall at Admiralty and Civic Square (the latter only from outside as it's closed to the public once more).

As we were strolling about in the area, we heard "pop-pop" sounds in the not so far distance.  "Surely it couldn't be tear gas?", we reasoned, since it wasn't even 5pm yet -- and, as we had just commented minutes earlier, daytime protests tend to be peaceful even while things have started regularly taking a turn for the worse after darkness falls.  Soon afterwards though, another barrage of "pop-pop-pop" sounds were heard -- and this time, there was a distant whiff in the air of a substance I had previously never smelled.

Around the time that it was announced at a police press conference that the police had fired more than 1,000 rounds of tear gas since June 9th, I got confirmation that those "pop-pop" sounds were made by the firing of tear gas when I not only heard the sounds and smelt their contents but also saw plumes of smoke rise up in the air and felt my eyes stinging from the substance borne into my section of the area.

Because it gets blown about by the wind, the tear gas has an effect far beyond the area that it is fired into.  So at Admiralty this afternoon, it didn't matter if you were standing on Harcourt Road, on the sidewalks nearby, on overhead pedestrian bridges, in either of the two parks nearby, etc.: you'd smell the tear gas, see it and feel its sting.  And this was all the more so since so many rounds of tear gas were shot in the time that I was there.

To be sure, it wasn't 87 cannisters, like what had happened that one day that it was fired back in September 2014.  But as news has come tonight -- the third consecutive night of tear gas having been used by the Hong Kong police -- of tear gas having been fired in at least seven different Hong Kong districts today (along with a mob attack in North Point -- which, unlike at Yuen Long on July 21st, was repelled by protesters), I think it's patently clear that the police have lowered their standards in terms of deciding when it's appropriate to fire tear gas at protesters even while now seeming to favor doing so from literally -- though not metaphorically -- higher ground! :(
Posted by YTSL at 11:41 PM

Please be careful out there!