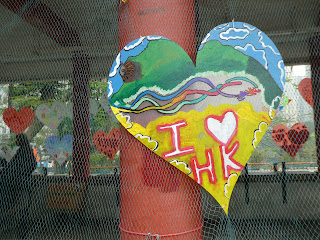 The following happened here in Hong Kong within a period of 30 hours or so from yesterday into today:-
- Civic Human Rights Front convenor Jimmy Sham was attacked by two masked men wielding a metal rod and baseball bat respectively while having lunch with a friend in Jordan (Jimmy Sham escaped unharmed; his friend has been hospitalized);
- Max Chung, the organizer of the July 27th anti-triad protests in Yuen Long, was attacked by a group of men while giving an interview on the banks of the Lam Tsuen River in Tai Po;
- The leader of the banned (and miniscule prior to its banning) Hong Kong Independence Party, Andy Chan Ho-tin, was detained at the airport by the police;
- Confirmation was received that the Civic Human Rights Front's proposed rally and march tomorrow --  the fifth anniversary of Beijing announcing an electoral reform package that fell short of the genuine universal suffrage promised in the Basic Law (constitution) of Hong Kong-- has been banned (even after an appeal);
- Joshua Wong, one of the major figures of the Umbrella Movement, was pushed into a private car while walking to South Horizons MTR station. It turns out that the people who did so were police officers as it's subsequently been revealed that he's been arrested;
- His fellow Demosisto party leader, Agnes Chow, was arrested at her home in Tai Po;
- Civic Passion chair and legislative councilor Cheng Chung-tai was also included among the arrestees caught in today's round-up; as was
- Former University of Hong Kong student union president, Althea Suen, who was charged in relation to the storming of the Legislative Council Complex on the night of July 1st!


This series of violent and legal intimidations -- or, as Hong Kongers have come to label it: white terror -- one day ahead of yet another planned mega protest -- which I can still see happening despite the Civil Human Rights Front having officially announced the cancellation of the rally and march they had been planning for weeks -- is the kind of thing that is making some Hong Kongers fearful about the future of Hong Kong (and others just plain angrier) far more than the existential threat of the People's Liberation Army (PLA)  intrusion into Hong Kong affairs. And what really upsets me time and time again about this veritable "death of a thousand cuts" is that it shows that there are Hong Kong bodies and hands that are willing to go about doing Beijing's dirty work.

One of the best things about the Hong Kong for me, for a long time now, is its freedom from fear -- political (with its people having (supposedly) guaranteed freedom of speech, freedom of assembly, etc.) and also on a personal safety level.  So the idea that people can get attacked while having lunch or walking along a river is as, if not more, upsetting to me than the police coming and arresting people when they're waiting to board a plane, walking to an MTR station or while at home.  And yes, all the people I mentioned that this happened to in the past, shocking 30 hours to are known political activists. But how many people in Hong Kong haven't become politically active in some way or other these days? (And if you haven't yet, what will it take before you become so?!)

Update: And now has come news of two other pro-democracy lawmakers, Jeremy Tam and Au Nok Hin, having been arrested too!  Honestly, this smells of desperation on the part of Beijing (and its Hong Kong puppet administration) -- to find heads to cut off from a leader-less protest movement -- as well as unjust repression!
Posted by YTSL at 11:03 PM