Still capable of being shocked by events unfolding in Hong Kong despite thinking I was already beyond being so :( 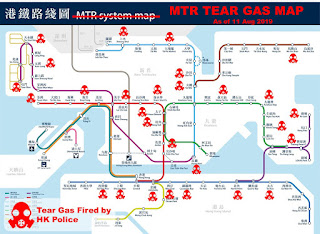 Two months ago today, the Hong Kong police fired smoke bombs and tear gas into crowds of protesters and also shot rubber bullets and bean bag rounds at people.  Their actions shocked me and many others here in Hong Kong.  But, rather than cause the extradition bill protests to cease, they actually ended up getting even more people out on the streets -- and increased the demands the protesters made (and are still making through today).

After an estimated two million people took march in a protest march on June 16th, there were hopes for a time that Carrie Lam might actually bow to the will of the people and that the police would realize how excessive their actions on June 12th were.  Little did the likes of me know then that July and now also August would bring more and greater shocks to the system and for Hong Kong; ones that psychologically devastate even though someone left so shell-shocked in recent weeks that there really have been times when I wondered anything else could surprise and pain me even more.

Take what happened last night as an example. The following are just some of the horrible things that occured over the course of a single day: Tear gas was fired inside Kwai Fong MTR station; tear gas also was fired in Tsim Sha Tsui, Sham Shui Po, Cheung Sha Wan and Wan Chai; and riot police charged at protesters in Tai Koo MTR station, caused people to fall down a long escalator there by doing such as pushing and beating them as they sought to retreat down it and even fired rubber bullets at them from a point blank range.

As if this all wasn't bad enough: after a male protester was shot in the eye by a rubber bullet on June 12th, a female first-aider was hit in the eye by a beanbag round fired by a police officer last night.  In addition, some police officers were caught on camera disguising themselves as demonstrators and attacking the real protesters in Causeway Bay -- something that brings to mind Triad members doing the same at Occupy Mongkok in 2014.

The suspicions many Hong Kongers have of police-Triad collusion in the wake of what happened in Yuen Long on July 21st were further enhanced last night after men dressed in white went about beating up people with poles and metal rods in Tsuen Wan.  And in notoriously "red" North Point, four people (including two RTHK journalists) were attacked by suspected Fujianese thugs who had come from north of the Hong Kong-Mainland Chinese border despite there being a heavy police presence in the area for much of the day.

Small wonder then that many of us here in Hong Kong felt emotionally exhausted, if not outright devastated, this morning.  But rather than have a day to recover, today saw more protests -- including by staffers of a hospital over "police excess" and one that saw Hong Kong International Airport shut down (and more than 200 flights cancelled).

More than incidentally, one reason why the airport has been a popular protest site is that it's thought that the police will not fire tear gas there.  Except that now that they have done so in an MTR station as well as at a children's playground, popular shopping districts, etc., it probably should not be a surprise if even a busy international airport turned out to not be exempt after all. :(
Posted by YTSL at 11:11 PM