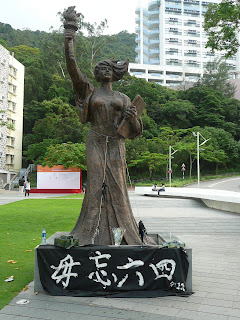 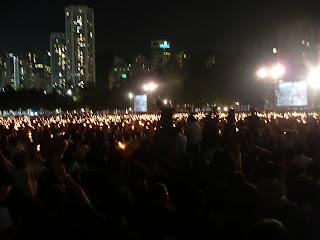 180,000.  That was the total number of attendees announced midway during the event by the organizers of this year's June 4th candlelight vigil at Victoria Park.  That number is the largest by far estimated for this annual event in the years that I've attended it -- and since I moved to Hong Kong in May 2007; and it is a measure not only of how Hong Kongers are determined to remember the events that took place in and around Tiananmen Square 23 years ago but, also, their wishing to register their unhappiness at recent domestic political "developments", including with regards to both the outgoing and incoming Chief Executives of this Special Administrative Region of the People's Republic of China.

There are some who think that the memories of June 4th and the Victoria Park candlelight vigil should not be linked to Hong Kong politics.  But there also are others (like my Hong Konger friend who I attended this year's and last year's vigils with) who think that they should be linked more -- and rue that it wasn't until close to 10pm this evening that the first mention was made of Leung Chun-ying.  (For the record, it also wasn't until around that time that I heard the first words of English being uttered by an official speaker at the event -- to, among other things, thank those English-speakers for who were present to show their support.)

In any event, I for one am very glad that Hong Kong is able as well as deigns to remember and commemorate in a major, peaceful way the shocking events that took place in Beijing in the summer of 1989.  And for the record: even if the actual number of attendees didn't total 180,000 this evening, it certainly was a very large one -- for this June 4th, not only were Victoria Park's football pitches and basketball courts filled with people but so, too, was the large Central Lawn.  (And I can personally bear witness to all six of the park's football pitches having been filled before my friend and I got into Victoria Park at 7.45pm, still some 15 minutes before the event's officially scheduled start; hence our being among the thousands of attendees who found ourselves heading over to find spots on the Central Lawn instead!)