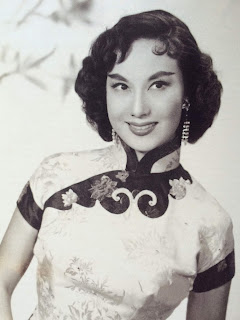 
Before what was touted as the Asian premiere of the restored version of this cinematic offering that was released in Chinese cinemas two years before the 1949 Communist Revolution, film critic/scholar Law Kar "treated" the audience to a 20 minute talk.  You'd think that since Barber Takes a Wife is part of the HKIFF's Li Lihua retrospective program, he'd say quite a bit about its lead actress.  Instead, he actually only mentioned her in one sentence; talking much more about the company behind the film (whose founder's descendants have had a hand in the movie's recent restoration) and other bits of trivia, such as the film's portrayal of barbers having caused a strike by barbers in Shanghai, where it's set!


Fortunately, this Wenhua Film Company production does actually feature Li Lihua quite a bit more -- even though its main character is indeed a barber who does the kinds of things that aren't exactly exemplary but do lead to funny developments that make this now 72-year-old comedy an entertaining watch still in 2019.  Handsome, charming and super popular, and known to many by his call number at the hairdressing salon where he works, "Number Seven" (Shi Hui) is asked to take part in what amounts a con job by a customer whose business could do with a large cash infusion.


After the barber lets on in a conversation that he'd like to make more money than his barbering job can get him, the businessman tells him about a newspaper ad placed by a Chinese heiress, just returned from the US, for a husband.  With the help of the businessman, Number Seven fakes an identity as a wealthy company director, with an economics degree from Oxford University to boot, and goes off to court the lady in question (Li Lihua) -- little realizing that she, too, has faked her identity and, in fact, neither is an heiress nor has ever set foot outside of China.  Oh, and she is a widow with a young child too!


There's no two ways about it: many of the actions of Barber Takes a Wife's main characters are morally questionable.  Given the economically uncertain and troubled times though in which the people portrayed in the film lived though -- one which such high inflation that a meal for four people at a fancy restaurant could cost over 150,000 Yuan! -- their attempts to acquire wealth can be somewhat understandable, even if not laudable.  In addition, the characters played by the movie's charismatic leads are so charming that many of their actions actually end up making one smile, if not outright laugh -- and making it so that audience members can't begrudge them a happy ending against the odds!


One year after playing the leads in Barber Takes a Wife, Shi Hui and Li Lihua appeared together in another Wenhua Film Company production.  Rather than play a pair of would-be lovers this time around though, they are cast as an uncle and his niece whom he and his wife have raised since she was five years old (presumably after the death of her biological parents, who are never mentioned in the movie)!  And at the helm of Bright Day is the legendary playwright, Cao Yu, whose sole foray into the world of cinema this was.


Considered a milestone of post-Second World War Chinese cinema, the film centers on a kind lawyer who can't help but interfere into the affairs of less fortunate folk, even if this involves pitting himself against powerful folks and outright thugs.  While this drama is pretty earnest, its hero is an easily likeable man with a frequent twinkle in his eye along with edible goodies to dispense to orphaned children and the like who helps to make sure that things aren't all dark and depressing -- even after his good friend, the director of an orphanage, is blackmailed into selling the orphanage and putting his charges along with himself in dire straits.


Set in China just one year before Chiang Kai Shek's Kuomintang regime were driven out by the Communists to Taiwan, Bright Day is another film where economic troubles looms large in people's lives.  Rather than accept that this means that the line between right and wrong inevitably gets blurred in such times, however, Cao Yu has made his stance clear: that is, that there recognizably is a difference between good and bad; and good can as well as should prevail and even triumph always, though it it's true enough that it can take quite a bit of an effort and long journey to accomplish it.

Something else that is of little doubt is that Bright Day belongs to Shi Hui, an actor whose cinematic output I hope to be able to see much more now that I've been charmed by him on two consecutive evenings of HKIFF screenings.  And while Li Lihua is on screen for far less time than in most of the films I've seen her in (starting from The Fate of Lee Khan one evening in a New York City arthouse theater more than two decades ago), she does leave an impression playing a character is far more girly and conventional than the ones which made her a legend.