The Umbrella Movement at Lion Rock, Admiralty and elsewhere in Hong Kong 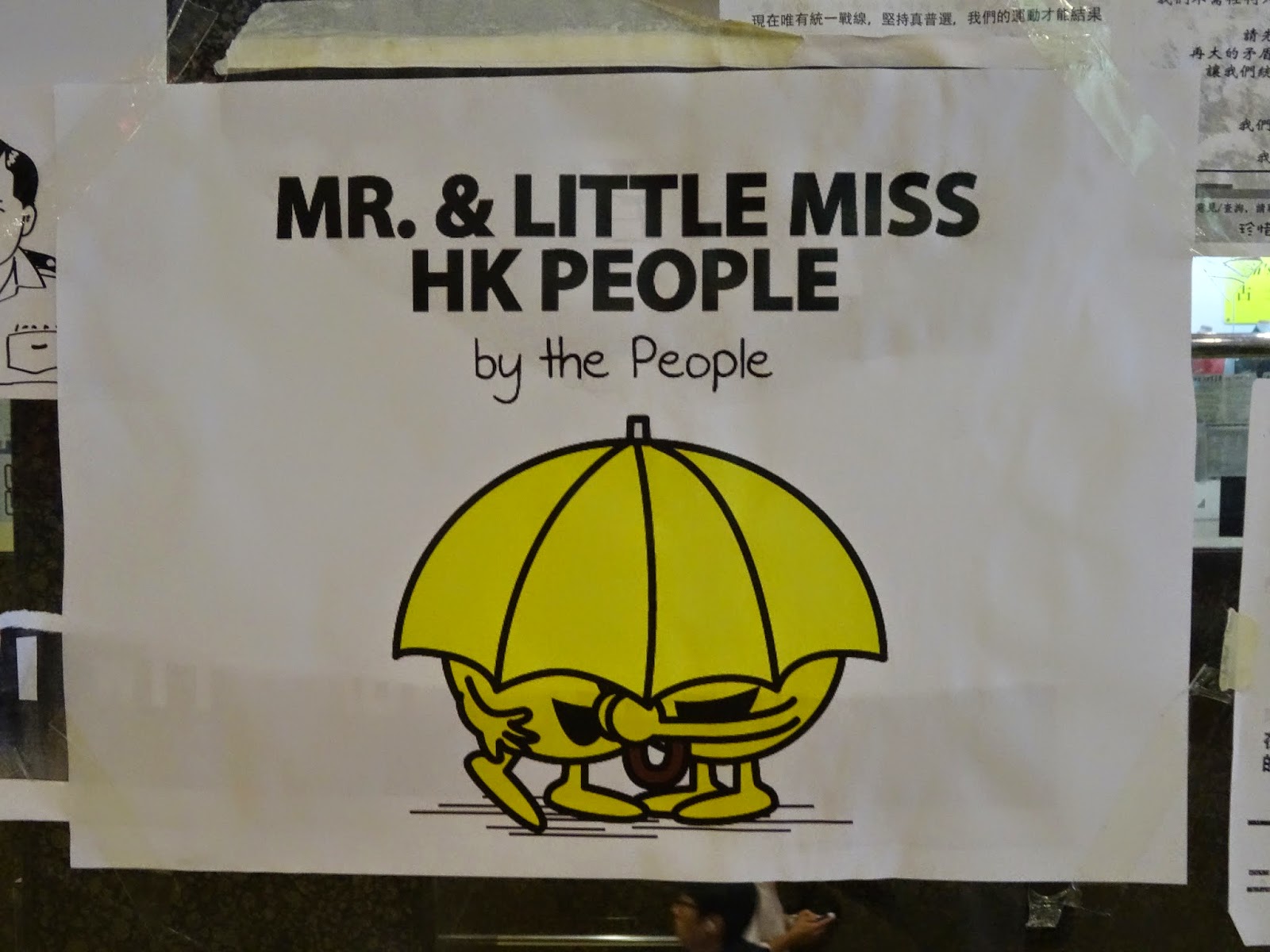 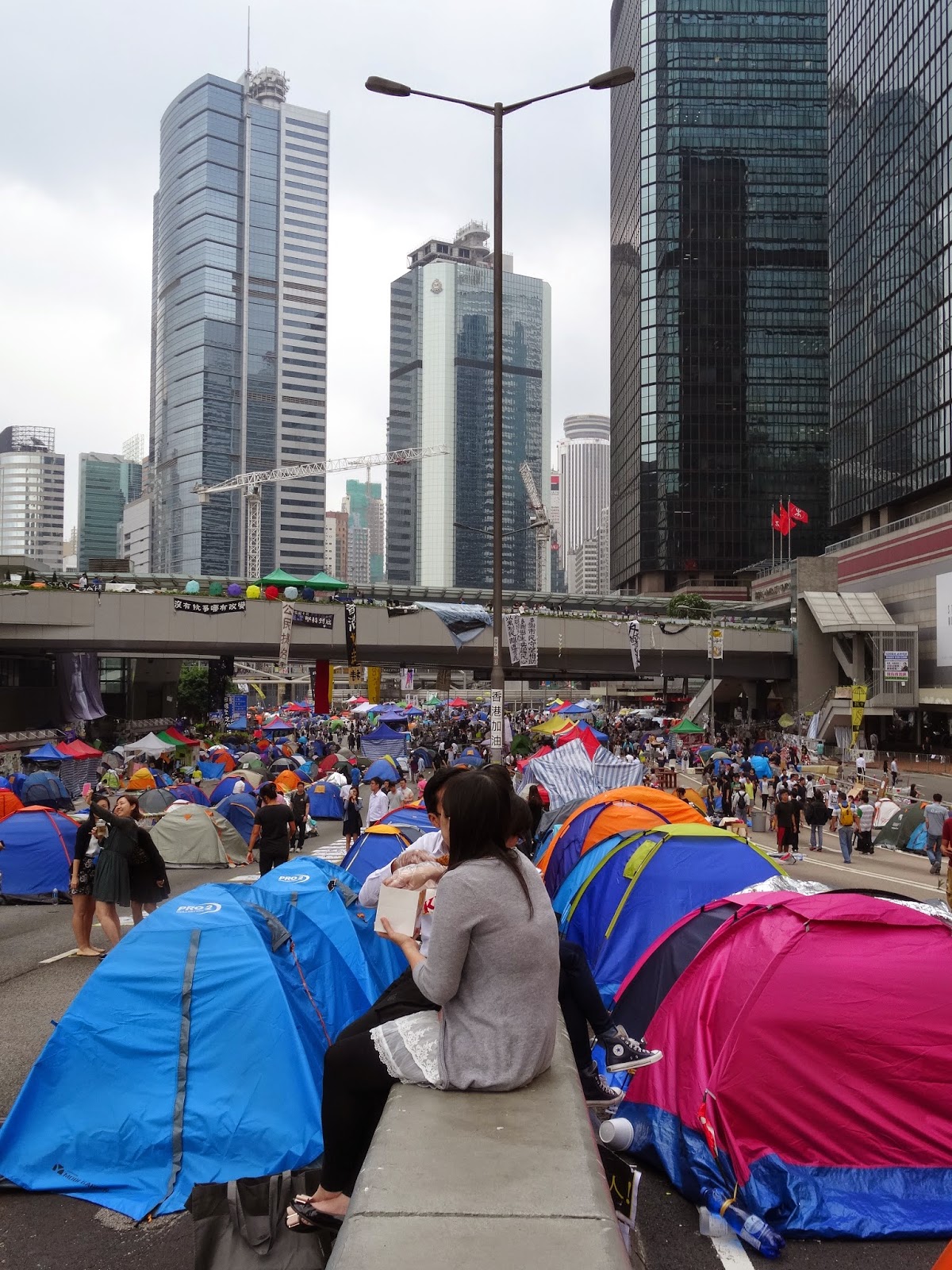 A popular area for lunch at Admiralty 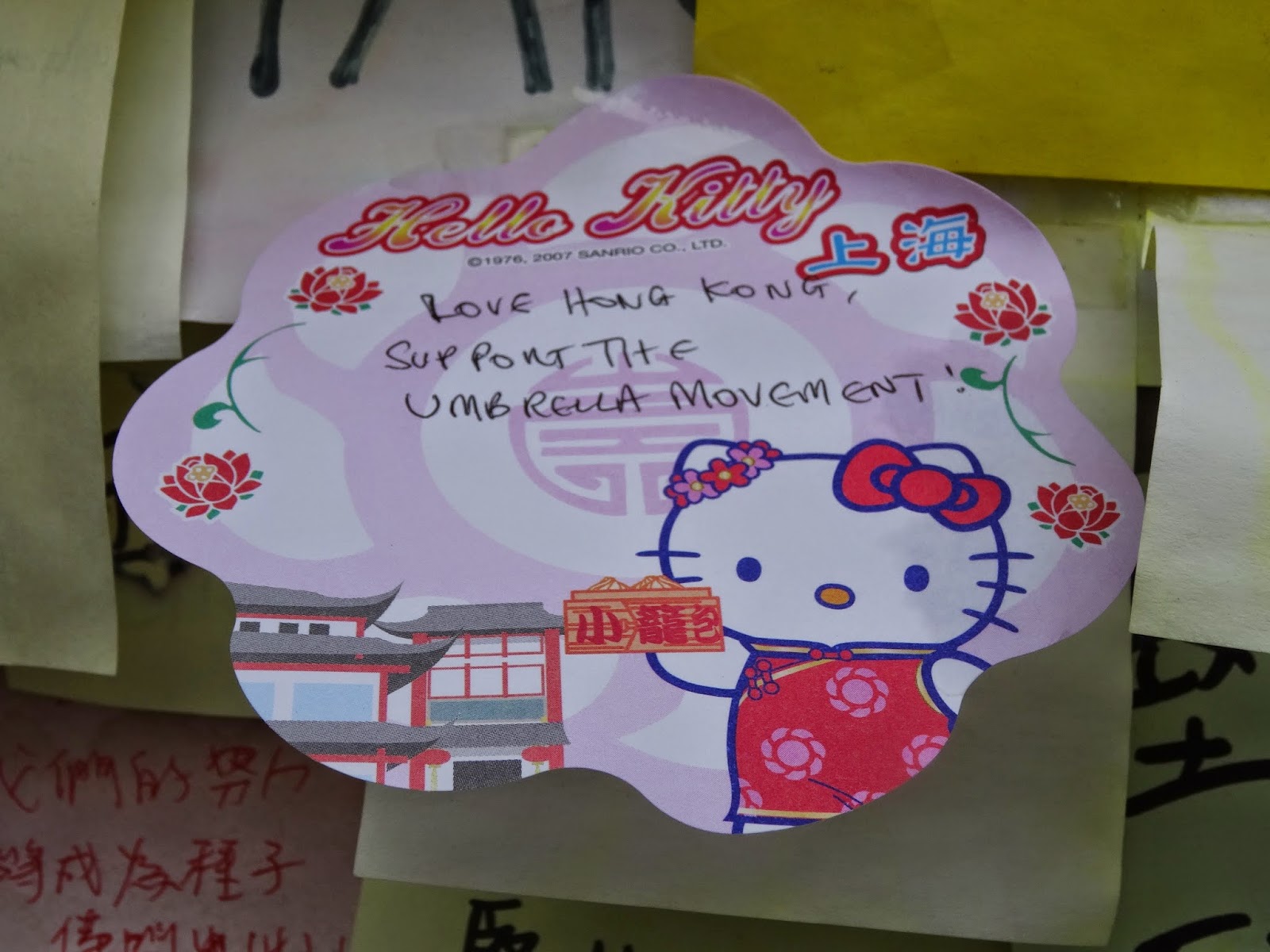 The unrest continued in Mongkok today but as serious as it was, the big news that people were reporting to one another via social media, phone messages and other means was about a group of climbers hanging a giant yellow and black banner emblazoned with the Chinese characters for "I want real universal suffrage", an umbrella symbol and the words "Umbrella Movement" on Lion Rock.* (To watch a video explaining why this action was undertaken, go here.)

I was lunching at Admiralty when I received word from a friend about the Umbrella Movement on Lion Rock act.  Minutes before, I had been in an office high above Admiralty discussing the Umbrella Movement and 689's brazen comments about democracy and the poor with a woman working there who told me that several of her colleagues as well as her have taken to spending lots of time in the protest areas, including regularly at lunchtime but also after work and during the weekends.

And minutes after I finished my lunch and was strolling about in the area, I was hailed by someone else I knew and proceeded to have a fairly lengthy conversation with him whose topics included -- you guessed it -- 689's recent comments that have incensed much of Hong Kong in an interview South China Morning Post columnist Alex To has described as having "set the gold standard on how not to do a media interview for generations of politicians to come"!


Something else that I discussed both before and after lunch today was how the authorities seem to think that the Umbrella Movement has just a very few supporters as well as participants.  For example, during the talks held on Monday evening between Umbrella Movement representatives and the authorities, one of the latter looked to have inferred that people at home (rather than out in the protest areas at the time) all weren't Umbrelle Movement supporters; to which I wanted to shout out "Little do you know!"


On a similar note: In a letter to the editor published in the South China Morning Post a few days ago, someone drew the inference that there aren't many Occupy Central supporters out there because he hadn't seen anyone sporting a yellow ribbon while taking a ride in the MTR.  I hereby wish to tell that person (and interested others) that if they were to go to the protest areas -- be they in Central, Admiralty, Causeway or Mongkok -- they will find that not all people there sport yellow ribbons.


Actually, I'd go so far as to say that very few of them sport yellow ribbons.  Also, not everyone in the area is clad in a black or yellow t-shirt.  For that matter, there actually can be seen quite a few people there who are attired in shirts, blouses, dresses, etc. rather than t-shirts of any color! Because lots of the people are more inclined to demonstrate their support by doing such as spending time in the protest area(s) rather than by altering the way they regularly dress.

Put another way: Umbrella Movement participants and supporters dress and look like the kind of people that you find in "regular" Hong Kong -- because, well, they are regular Hong Kongers (and constitute a far wider range than "just" "students", "radicals", etc.)!  And I bet that there are far more of them about and around than the authorities and "anti-Occupy" folks do or want to realize.

*An update: a video has been uploaded on Youtube showing how the climbers got the giant banner hanging from Lion Rock (see here).  Well done guys (and at least one gal) -- and thank you for speaking out and lifting spirits up!
Posted by YTSL at 7:56 PM

well done to the climbers, great feat...sadly, let's see how long before the HK Police take it down...

To my mind (and I suspect many others), it doesn't matter if the Hong Kong Police quickly take down the banner. The very fact that it got put up -- and that people had the idea to do it -- is enough.

The banner at Lion Rock is truly inspiring! It epitomizes the courage and creativity of the Umbrella Movement. The opposition, on the other hand, has consistently shown itself to be small-minded and mean-spirited. I'm placing my bets on the former, no matter how improbable the odds. Demanding "the impossible" is so much more life-affirming than accepting the status quo. Although I'm back home now, my heart is still strolling through the free spaces of Occupy Hong Kong. Thanks for the updates! :D

The banner's been taken down but I'm sure the memory of it will live for a very long time.

This evening at Admiralty, I saw replicas of that banner adorning chests -- and also the faces of people taking memorable photos of themselves in the protest area (which, more than by the way, was buzzing and full of people this evening).