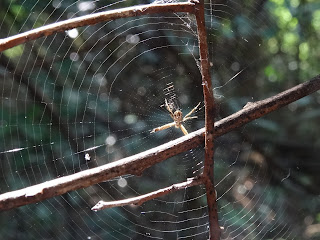 A tiny spider and its beautifully spun web 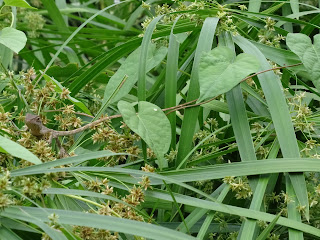 A long-tailed lizard I'm happy that I managed to spot! 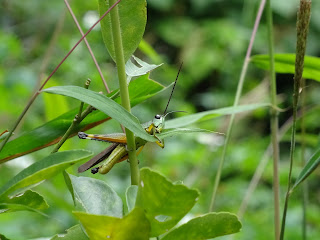 
On the same day earlier this month that I spotted a large number and variety of butterflies at Fung Yuen Butterfly Reserve, I also caught sight of some other interesting-looking critters at the 42-hectare-sized "Site of Special Scientific Interest".


Because of their size and coloration, these creatures could be considered to be more difficult to spot than the often more colorful -- and larger in some instances -- butterflies that the conservation area is more famous for.  But those that one catches sight of often tend to be easier to photograph than butterflies (and their moth relations), particularly those species famous for their hardly ever stopping to flap their wings such as the white dragontail that is one of two butterflies considered the star attractions at Fung Yuen.


When talking to friends, I often get the feeling that these other critters tend to be considered less visually attractive than those insects in the order Lepidoptera; with spiders (large or small) and lizards (be they skinks or otherwise) particularly being more likely to revulse than fascinate.  For me, they are at least equally cool to spot in nature -- though it's true enough that I'm not too keen for them (and, for that matter, any other living thing!) to make their home in my abode, like is occasionally the case!


Speaking of abodes: I really was glad to see such a diversity of creatures at Fung Yuen on my most recent visit there.  I've already mentioned that in the past year or so, the building of the Mont Vert high-rise residences close to the butterfly reserve had affected the butterfly population.  In addition, since my visit to the conservation area, I've learnt of goings on at nearby Sha Lo Tung causing ecological concern.

It would be a great thing indeed if it turns out that nature is far more resilient than we often realize.  Of course this is not to say that humans should feel free to do all kinds of bad things to the environment.  Indeed, we really ought to care far more for and about it than we often do; this not least since it's generally way too easy to callously destroy something precious that has/had existed for eons, including the ecologically rich area at Fung Yuen.
Posted by YTSL at 11:02 PM