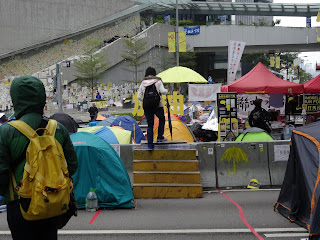 Yellow was/is the color of the Umbrella Movement

This past Sunday, I attended a special screening of a candidate for least seen Golden Horse Awards nominee at a little known cinema in Shau Kei Wan operated by a South Korean cinema chain. Despite having received positive word of mouth, Chan Tze Woon's Yellowing has not been screened in any of the multiplexes owned and operated by a major Hong Kong cinema chain; prompting intimations of creeping self-censorship here in the Fragrant Harbour in general and an effective "blacking out" of films about the Umbrella Movement in particular in the wake of the controversy generated by Ten Years (which, more than incidentally, is currently topping the video charts at the local HMV).


With a 29-year-old policy studies and administration graduate turned filmmaker as its main man, Yellowing is noticeably rawer than Evans Chan's Raise the Umbrellas as well as less comprehensive, despite having a lengthier running time (of a total that's been listed as being 128 and, alternatively, 133 minutes).  And rather than featuring interviews with notable personalities (such as Benny Tai, Joshua Wong, Martin Lee and co), this documentary of a mass movement looks at -- and hears from -- young supporters of the Umbrella Movement such as "Rachel Senior", an amazingly articulate first year University of Hong Kong law student, and "Rachel Junior", a shy but courageous 14-year-old secondary student who went to the Umbrella Movement frontlines straight from school and in her uniform.


Fairly early on, Chan Tze Woon discovered that it'd be well nigh impossible to stay a mere observer or witness to the pro-democracy protests when he was assaulted by a uniformed policeman while filming scenes at the Occupy Mongkok site.  It says a lot that not only did he go on to shoot some 1,000 hours of "fly on the wall"-style footage in "Occupied" space over 67 days of the close-to-three-month-long acts of mass civil disobedience that occured here in Hong Kong in 2014 but that he decided to go ahead and include in Yellowing footage showing the offending cop's visage, and reaction after realizing that Chan's handheld video camera was still recording after the filmmaker had fallen to the ground.


A visceral work which captures some of the more violent moments and phases of the street protests that -- it bears reminding -- were largely free of violence, this documentary, whose Chinese title translates into English as "Memoranda of the Troubled Times", also records a substantial amount and variety of talk along with action of the non-violent kind (such as manning supply stations at Occupy Mongkok and constructing a waterproof canopy for Occupy Admiralty's "study corner").  And even while some of the conversations and solo ruminations can be on the meandering side and seem almost too light-hearted and trivial at times, they ultimately work very well at painting interesting and insightful portraits of a number of the "on the ground" ordinary citizens turned political activists, many of whom are far from being the extremist hotheads that opponents of the Umbrella Movement often accuse the protesters of being.


Although their faces were unfamiliar to me prior to my viewing the film, I often felt while watching Yellowing that I knew many of the people given a voice in it -- or, at least, knew of people like them because they are so representative of the folks that I saw, passed by, came across, etc. at the protest areas of the Umbrella Movement this time two years ago.  The idealistic student.  The pragmatic older citizen.  The individuals wise beyond their years.  The ones willing to rush into the fray.  The reluctant street protester.  The accidental activist.  Everyone of whom came together -- for at least a short but (bitter)sweet period in time -- to fight for genuine universal suffrage and a brighter future for Hong Kong.


At one point in this work, an Umbrella Movement supporter talked about how the Lion Rock Spirit could be felt once again in the Occupy sites.  It got me thinking about how ironic it is that the pro-democracy protests have been accused by its detractors of dividing and weakening Hong Kong when the likes of me personally never felt a stronger sense of community and possibility in Hong Kong than at those Occupy sites.  Indeed, I often feel like I see the best of Hong Kong in the Umbrella Movement and its supporters, and am, at the very least, truly grateful to Yellowing for being able to show precisely that so very well.

You've really seen a lot of films that you have liked a lot recently. In fact, if it weren't for SEONDAL: THE MAN WHO SELLS THE RIVER (with a decent 7.5), the last 10 films that you have given scores for in the side panel would have had scores of 8 or above, which is incredible!

Yes, indeed re my having seen a number of films that I've liked a lot in the past couple of weeks or so. Maybe it helped that I stopped watching any films for about two weeks -- and that I have allowed myself to be more selective and only watch films that I really am interested in/think will be good rather than do such as go check out films that I think I should do so just because they're from Hong Kong, etc.!