Torii and more at Hakone Jinja 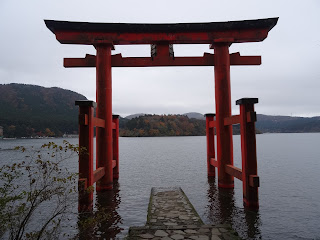 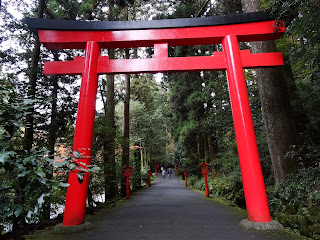 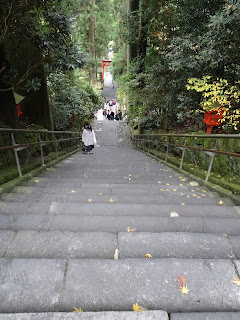 And what's a Shinto shrine without steep stone stairs? ;S
Some day soon, I tell myself, I will make it to Miyajima and behold the great Torii located some 200 meters offshore that is its UNESCO world heritage listed Shinto shrine's most well known feature.  In the meantime, I love looking out for and at the torii of Hakone Shrine situated at the edge of Hakone's Lake Ashi when sailing on one of the "pirate ships" that transport visitors from the northern side of this beautiful body of water to its eastern end.
On my second trip to the area, I decided to not only view this eighth century shrine's most visible vermilion torii from afar but also to pay a visit to Hakone Jinja.  Unlike many a samurai of old, the group I was with didn't approach this ancient Shinto place of worship but, rather, walked to it from the pier at Moto-Hakone a few hundred meters away.  This way, we passed through a number of other torii and along an approach lined by over 800-year-old cedar trees before getting to the vermilion structure that is Hakone Jinja's most visibile feature from the boat.
Within the shrine precinct is a cedar tree with a shimenawa (a straw rope with white zigzag paper strips) around it denoting its sacred status.  Whenever I see such a sight, I get to thinking of My Neighbor Totoro, in particular the tree in the clearly enchanted woods near their home that the father takes his two daughters to pay their respects to/at.
And as I've come to expect of Shinto shrines, there are a number of stone steps to climb up to its main hall.  Even while I made noises about shrine buildings often not being all that impressive, I still couldn't resist climbing up to the very top of the stairs to take a look around up there before making my way down to the water's edge and what I have to say is Hakone Jinja's more picturesque spot: by the torii that points out the whereabouts of this shrine to people sailing by on the lake.
As my mother and I approached that torii on the edge of the lake, we caught sight of a couple dressed in traditional Japanese wedding attire posing for photographs.  As they must have expected and resigned themselves to, the pair also attracted the attention of many tourists in the area -- and consequently had lots more people snapping shots of them than just the man they had expressly hired to do so.  And yes, I must admit to having taken a few snaps of them myself; all the while thinking that they were far more elegant and had picked a far more suitable spot than the Hong Kong wedding photo parties I've encountered at such as Shek O Beach and by a country road deep in the heart of Sai Kung East Country Park! ;D
Posted by YTSL at 11:44 PM

Your photos and text depict another active day of touring, complete with colorful torii and what looks to be physically challenging stone stairs...You mention Miyajima. I remember visiting there on a daytrip from Hiroshima. Even though my memories have faded over time, I do recall the great Torii, although I wish I could have seen that structure at low tide...I hope you post a few more Japan blogs from this November trip because it is so beautiful there during the autumn.

Rest assured that there will be more blog posts about my November Japan trip. And you're right: Japan really is so beautiful during autumn.

Lucky you re having been to Miyajima (and Hiroshima). I think if I go there, I'd want to spend a night there to ensure that I can see that great Torri at low tide as well high tide... In the meantim,e I count myself blessed for having spent two nights in Hakone, and in such a wonderful ryokan too! :)