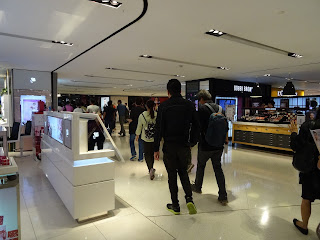 They may look like shoppers but the people pictured
walking through the cosmetics department of
a shopping mall are actually protesters! :D 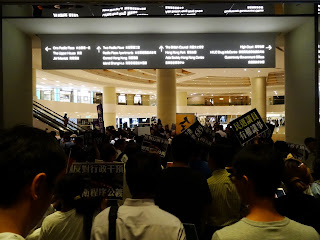 Protesters about to pass through Pacific Place mall! 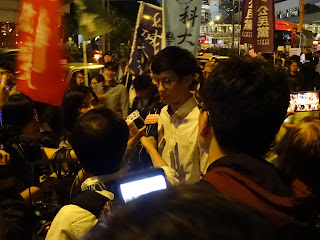 Baggio "Sixtus" Leung, one of the people whose actions
brought about this evening's protest rally
Earlier today, tumult and trouble reigned at LegCo (as Hong Kong's Legislative Council is popularly known).  After Younginspiration's democratically elected legislative councillors, Baggio "Sixtus" Leung and Yau Wai Ching, were unsuccessful once again in getting sworn in, the localist duo tried to storm a LegCo meeting but were prevented from doing so not only by security guards but also police called in by LegCo President Andrew Leung -- who also proceeded to adjourn the meeting until next week.
Amidst the turbulence, it was reported that former missing bookseller Lam Wing Kee had announced that he'd attend a demonstration this evening to oppose Beijing's anticipated intervention into this Hong Kong matter by interpreting the Basic Law to settle this oath case.  And it didn't take much time and thinking for me to decide that I'd be going too to the protest march against Beijing's bullying scheduled to begin outside the Chief Executive's office at Admiralty and end at the Liason Office at Sai Wan.
At the appointed time of 7pm, two friends (including the blogger behind The Fragrant Harbour) and I were among the crowd of around just 200 people that had assembled at the stated spot.  But by the time the march finally got going at around 7.40pm, the crowd had swelled -- and included a number of legislative councillors (new -- like Chu Hoi Dick and Nathan Law as well as Baggio "Sixtus" Leung himself -- as well as more established, such as the Civic Party's Claudia Mo) and other recognizable faces such as Joshua Wong and Lam Wing Kee along with regular Joes and Jills).
Before the march began, announcements were made that a protest march application hadn't been submitted to the police and this protest rally was consequently illegal.  What with people being advised to take down a phone number to get legal representation in the event that they were arrested for taking part in this illegal assembly, the sense being given was that this demonstration was quite different from such as the legal annual July 1st marches -- and I have to admit to feeling some fear and trepidation in going ahead and taking part in this particular protest against Beijing, 689, and Andrew Leong.
But as we went about following an unorthodox route that took us through Queensway Plaza's Lab Concept and Pacific Place malls, the mood lightened considerably and I found myself laughing at how surreal but also how very Hong Kong it was that a protest march here would actually pass by sales counters for cosmetics and a ritzy mall's gawking shoppers!  And as it became clear over the course of this evening's march that the police actually were helping keep things calm by clearing the road and ensuring a smooth flow of foot as well as vehicle traffic along the way, I got to relaxing and even enjoying the fact that this particular protest was taking place in lovely weather conditions (rather than the usual considerably hotter ones of the summer).
Walking easily along with my two friends, we found ourselves going from the middle of the pack to very near the front of the march.  Along the way, we passed by the likes of Claudia Mo and Chu Hoi Dick and, at one point, unexpectedly discovered that we were walking right in front of Baggio "Sixtus" Leung and Yau Wai Ching; whereupon we engaged the affable-looking Leung in conversation -- pointing out the irony of our being allowed to peacefully take part in an illegal demonstration but his and Yau not being allowed to do what (hundreds of) thousands of voters had elected them to do: i.e., be sworn in and take part in LegCo meetings.
Approximately one hour and forty-five minutes after the march began, we reached Sai Wan.  Rather than protest in front of the Liason Office, a spot close to it was set aside for speechifying by several people (including Ken Tsang, Nathan Law, Claudia Mo, Chu Hoi Dick and "Long Hair" Leung Kwok Hung).  To be honest, I think people would have been better served if the march organizers had just thanked those who had turned up and announced plans for further action before quickly wrapping up things rather than indulge at length at essentially preaching to the converted.
As it was, I -- along with a number of other people -- decided to call it a day as speaker number eight (or was it nine?) was making his voice heard.  Still, upon reflection, it was good to see representatives from a host of different politicial parties at this evening's protests; and in particular, it was good to see representatives from across the democratic spectrum: i.e., established pan-democrats, long time radicals (who now can seem pretty moderate in comparison to certain of the younger generation), "umbrella soldiers", and localists.
Posted by YTSL at 11:59 PM

I only recall one march in our area. It was the teachers anyhow it shock my youngest son. Not much happen here to radical.
I sure hope there not much trouble after our election.

I don't think it's a radical thing to go take part in a protest rally/march; this especially if the event is a peaceful one -- which (touch wood!) is pretty much the case here in Hong Kong.

And I hope sanity will prevail when people cast their votes in the upcoming US elections as well as after it.