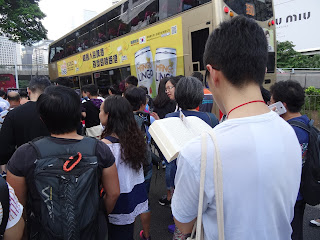 Early on during yesterday's protests, people dealt with
delays over the course of the march with patience 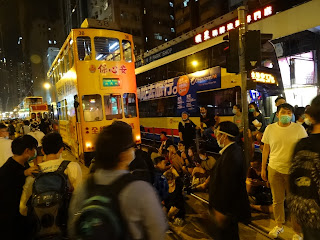 Even late in the evening, after Des Voeux Road's temporary occupation,
people were generally far calmer acting than they've been given credit for


At 3:07 this morning, normal traffic resumed on Des Voeux Road; with the protesters having dispersed after a combination of police actions, and calls put out by Demosisto, the League of Social Democrats, the Labour Party and others for an end to the protest rally which had officially begun at 3pm in Wan Chai along with a departure from the scene "to avoid [unnecessary] sacrifice".  Thus it was that what had looked like it could turn into an Occupy Mark 2 fizzled out fairly quickly.


But anyone who thinks that the flames of anger and indignation have been completely extinguished is seriously mistaken; this particularly after the top (but effectively rubber stamp) legislative organ of the Communist Chinese government in Beijing went ahead and issued its interpretation of the Basic Law (Hong Kong's constitution) earlier today.


"Hands off our judiciary", read a hand-made sign at yesterday's protests against Beijing's bullying (the second in four days here in Hong Kong).  Well, today's actions had Beijing doing worse: by going over the head of Hong Kong's judiciary and effectively making nonsense of the Basic Law supposedly granting Hong Kong "a high degree of autonomy" since the Communist Chinese government decided to rule on a case that currently is being heard in Hong Kong's high court -- and in so doing, barred two democratically elected lawmakers from taking their seats in Hong Kong's Legislative Council.

If truth be told, I think Sixtus "Baggio" Leung and Yau Wai Ching acted pretty idiotically at what should have been their swearing-in ceremony but turned into a silly farce.  Among other things, I reckon Leung's "crossed fingers" gesture when reciting the Legislative Council oath was ridiculously childish and Yau was overly vulgar when substituting the word "republic" (as in People's Republic of China) with "ref**king" during her attempt.  And in retrospect, I (along with many others) really wished that the pair had saved their theatrics for after they had been sworn in as Legislative Councilors.


At the same time though, it's patently clear that Beijing has taken advantage of their actions which, in association football parlance, would have been worthy only of a yellow card to seek to permanently ban them from entering the playing field and playing the game.  And that is really something that is incredibly unjust, and bordering on seriously irresponsible in terms of the administering of justice and attempting to actually put a lid on dissent and rebellion in Hong Kong.
There really are times when I wonder whether -- not even how come -- Beijing really  can be so absolutely culturally tone deaf when it comes to Hong Kong.  For time and time again, the people over on the other side of the Mainland Chinese-Hong Kong border -- regular folks but also the Communist Chinese goverment -- have shown that they truly don't realize that Hong Kong is culturally so very different from the rest of China.

I also have to say that it's truly possible to agree with the words on the banner that Baggio Leung and Yau Wai Ching displayed at that oath-taking ceremony (i.e., that "Hong Kong is not China") without being someone who's advocating Hong Kong's independence from China.  After all, semantically speaking, Hong Kong really is not China -- the way that New York is not the U.S.A., London is not Britain, Tokyo is not Japan, etc.  Put it another way: Hong Kong is not China; rather, it's "only" a part of China -- whose government has at times, albeit seemingly only when its convenient, trumpeted the country's cultural and ethnic diversity and such!