Energy drinks to drive the zzzs away in Japan! 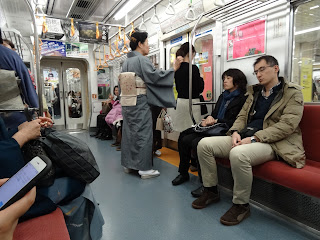 Kimono-clad women are a common sight in Japan
-- as are people sound asleep on trains and such ;D 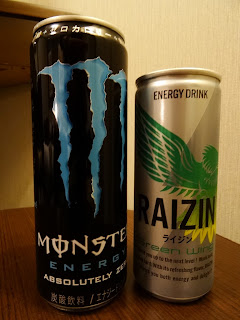 Maybe that's why energy drinks look
to have become quite the rage in Tokyo! :O

While walking on urban streets in Japan, it's almost as commonplace to get handed free packets of tissues (with advertising on them for such as restaurants, clubs and other businesses) along with advertising leaflets.  On hot days and evenings, one also is quite likely to be offered free fans (that, again, have advertising on them).
But until this most recent trip to Japan, I had never seen people handing out free cans of energy drinks on the street.  And by the same token, the first day of this recent trip to the Land of the Rising Sun marked the first time ever that I found free energy drinks -- rather than, say, complimentary bottles of mineral water -- waiting for me in my hotel fridge!
Perhaps this development should have been expected in view of Japan being famously full of hardworking salarymen (and their female counterparts) -- and also infamously full of people whose ability to fall into a deep slumber on trains and buses, in bars, on park benches and sometimes also right on the street seems second to none.
In any event, I not only found myself being prone to nodding off on trains when in Tokyo and beyond but also feeling amazingly invigorated after sipping just a few drops of the Raizin Green Wing energy drink the first afternoon that I was back there again.  Indeed, such was the immediate and strong effect that it had on me that I became decidedly afraid of finishing a whole (small) can by myself -- and told my mother (who underwent triple bypass surgery a few years ago) to not drink more than one mouthful at a time of what I can only surmise is a super caffeinated potion! :O
Posted by YTSL at 11:59 PM

funny thing I've never had complete energy drink. I tried sip of others and didn't care for them.
Coffee is on

I don't think you're losing out by never having had a complete energy drink. The Green Wing drink I had tasted bubble-gummy -- not horrible but not my first choice of flavor to have for a drink! ;b

I'd would avoid these energy drinks altogether.

Coffee of any kind would not have much effect on me as I could go straight to bed right after. If I am going to need a boost in order to pull an all-nighter I would rather brew some green and unaged Pu Er Tea instead. These are the strongest tea available in the market and it suffice. Last time I did that quite a few years ago it kept me up for over five hours without a refill.

Don't worry, I won't go out of my way to drink energy drinks again... and would you believe that I've never ever pulled an all-nighter -- even at college and grad school?! ;b