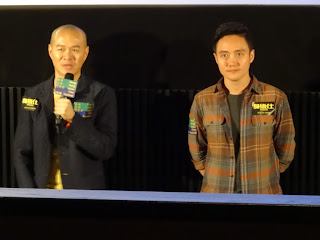 Apprentice (Singapore-Germany-France-Hong Kong-Qatar, 2016)
- Boo Junfeng, director-scriptwriter
- Starring: Fir Rahman, Wan Hanafi Su
No, I'm not reviewing the American TV series starring the orange-haired businessman turned reality TV show personality turned President-elect of the United States of America.  Rather, Apprentice (without a "The" in front of it) is the sophomore feature offering of a 32-year-old Singaporean filmmaker made with funding from various sources (including Hong Kong by way of Pang Ho Cheung) that had its world premiere at this year's Cannes Film Festival and is Singapore's nominee for the 2017 Best Foreign Language Film Oscar.
Boo Junfeng, the impressive drama's director-scriptwriter, attended at the post-screening Q&A of his film at this year's Hong Kong Asian Film Festival along with chief producer Raymond Phathananiviragoon.  As soft-spoken as he was articulate, the distinct impression one got from observing him discussing his emotionally affecting as well as thought-provoking work was that still waters run deep.
The same could be said of Apprentice's protagonist, a former soldier turned corrections officer who is a man of few words even while appearing to devote substantial chunks of time to serious thinking and brooding.  The audience first meets Aiman (Fir Rahman) shortly after he's transferred to Larangan Prison, the nation's highest security correctional facility that possseses housing for Death Row inmates and an execution chamber that looks to see fairly regular use.  And although his entrance interview seems run-of-the-mill, one quickly gains the sense that there's more to Aiman's decision to move there than initially meets to the eye.

Similarly, even while it initially seems fairly normal for Aiman to be living with his elder sister Suhaila (Mastura Ahmad) -- rather than, say, their parents, as would be more usual for a young Singaporean single man -- there soon is revealed to be a story behind this particular domestic arrangement; and, as it so happens, that particular detail of Aiman's biography is related to his wish to work at Larangan Prison, where he catches the eye of Rahim (Wan Hanafi Su), the facility's veteran chief executioner who just happens to be looking for an apprentice with sufficient steel to be able to pull the lever for the machine that sends condemned men to their deaths by hanging (the preferred method of capital punishment in Singapore -- and, for that matter, neighboring Malaysia too).
An unusual prison drama which focuses on the guards rather than guarded, Apprentice also distinguishes itself by being humanistic rather than sensationalist or even exploitative in nature.  In addition, there's a masterful quality to the filmmaking/storytelling which makes it so that even while this work's characters are painted using fairly broad brushstrokes that don't actually reveal that many details about their lives, there most certainly is enough there to hint at the inner workings of their mind and the emotions they suppress as well as feel.
Produced on a modest budget, Apprentice is understandably a small-scale effort with a cast consisting of fewer than a dozen folks with speaking parts.  Yet pretty much every one of those actors and actresses made their time on screen really count, by creating characters that are hard to forget, with such as glances that can penetrate into your soul (including the looks that two sons of a condemned man standing outside the prison give to people passing by in a taxi) and cries that tear at your heart (by a man making the slow final walk to his execution) along with many a line of dialogue delivered with such emotion that they look to have been uttered by real-life individuals rather than mere fictional characters.
Boo Junfeng is unabashedly open about his being against the death penalty -- and it shows in Apprentice in terms of there clearly being a psychological impact and emotional toll on pretty much everyone involved in an execution.  The condemned individuals, their family members, the executioner: all of them end up suffering in one way or another.  And even while the outwardly cool Rahim tries hard to affect a "someone's got to do it, and I'm tough enough to do so" attitude and transmit that to Aiman, the fact of the matter is that, ultimately, they are human with feelings that even years of desensitizing training and experience cannot completely eliminate.
My rating for this film: 8.5
Posted by YTSL at 11:20 PM