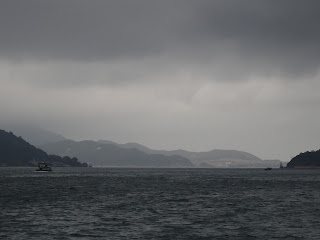 America, what have you done?  Frankly, the idea of a Trump presidency fills me with horror and despair.  The likes of Jonathan Freedland and Van Jones eloquently express why.


I was -- and still am -- truly shocked by the US Presidential Election results.  But I should have seen it coming.  Sure, I personally only know one person who openly told me that he had voted for Donald Trump.  On the other hand, all bar two of the American friends I have who told me that they would be voting for Hillary Clinton are one or more of the following: female, not white, not heterosexual.  And of the friends who told me they weren't going to vote for either Trump or Hillary, all are white and the majority also happen to be male.

All this coming on top of what's been happening in Hong Kong over the past few days has made me feel like the apocalypse is upon us.  At the very least, I honestly feel like the chances of World War III happening in the next few years has exponentially increased with the election to the US Presidency of Donald Trump.  I can only hope that the saying that "it's darkest before dawn" actually could be true.  Because, in all honesty, it's all looking pretty dark out there right now -- and I don't just mean literally!
Posted by YTSL at 11:59 PM

HI YTSL -- We are all in shock and disappointed. Everyone will be doing some soul searching and then we have to move on and hope for the best. This is the new reality we have to get used to!

I knew Trump would carry my home state of Idaho. The only reason I vote for Hillary so the popular vote would be up and they would be no question who won...Like some American including my self I was total disenray of the results...Didn't sleep well last night.

I'm still upset by it all but less so after a good night's sleep than I was yesterday, when my emotions were rawer, etc. Agreed that it's a new reality that we have to get used to. Let's hope that opponents of Trump keep on fighting, and that they'll fare better against him next time, in the years to come!

My commiserations and help me out here: why do you think Idaho residents tend to be so pro-Trump? Is it because of his views on gun control? Can't imagine that you have that much of an immigrant, Mexican, Muslim, etc. problem (and population) in that state...

I started to leave a comment here a few days ago, but then my laptop keyboard unexpectedly froze up before I finished posting. I did manage to copy the text (using trackpad only). Here's what I tried to say: "Quite honestly, I've been a wreck. I'm happy that I have people (and also now a puppy) to take care of, because otherwise I would have trouble leaving my room. As it is, my thoughts and time have been returning to this every free moment. But, I am also determined to do more to protect at-risk populations, through donations and other efforts. I am planning to seek out ways to volunteer with refugees again. (The organization I used to work with left Massachusetts years ago.) I have already been involved with local politics, and I will continue to do so. There is a lot that can be done. But the disappointment, grief and horror about the election results have been visceral and deeply personal."

A few days later, I'm feeling a bit more functional, but still pretty consumed. I have started to make inquiries about volunteer opportunities with refugees and other immigrants. Like you, I fear the prospect of war. And the impact on vulnerable people.

So very much to worry about. (P.s. Sorry if the comment posted twice. I seem to be experiencing technical difficulties!)

Thank you for doing your bit to help refugees and other immigrants feel like they have (some) friends in the U.S.A. I worry about people born in the US who happen to not be classified as "white", heterosexual, etc. too. And I also continue to worry about what will happen to the world as a whole when Trump joins the likes of Putin and Xi Jinping at the helms of their countries.

What the likes of Trump and many of those who support him don't seem to realize is that there's no turning the clock back on a multicultural, etc. America and world. And while the likes of us may not have the political power that they have, we can at least show how cross-cultural relations actually can enrich lives, rather than impoverish them.