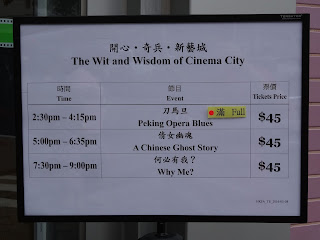 
Ever since I attended a full house screening of my favorite movie of all time at the Hong Kong Film Archive yesterday afternoon, I've felt like I've been floating on air.  I may have viewed Peking Opera Blues more than 50 times already (including twice on a big screen in New York back in 2001, and once at the Smithsonian in Washington, D.C. before that) but I don't think I'll ever tire of watching it; not least because this is one cinematic offering that's not just super action-packed but also offers up so many really interesting and substantive ideas and messages (along with comedy that will get you laughing and dramatic moments that never fail to tear at my heart).


An amazingly multi-genre -- even genre-transcending -- work, Peking Opera Blues manages to entertain even while addressing a number of serious issues, in ways that remain pertinent three decades after it was first released in its home territory of Hong Kong.  Set in Peking circa 1913, after Yuan Shikai had succeeded Sun Yat Sen as the President of the new Republic of China and was showing signs of monarchism, the movie's early scenes show how political power can change hands quickly, that there are ruthless people willing to do what it takes to advance themselves professionally and politically, but also committed individuals willing to sacrifice much to do what they think is the right thing and folks who will end up getting involved in plots they don't know much about and caught up in circumstances outside of their control.


I've read analyses in which the film's three main characters -- all of them female and strong-willed but possessing very different outlooks and personalities -- have been described as being the three Chinas in human form; with Hong Konger Cherie Cheung's Sheung Hung, a woman intent on getting her hands on enough riches so that she can leave China, representing the then British Crown Colony.  But while watching Peking Opera Blues yesterday in post-Umbrella Movement Hong Kong, I got to latterly thinking that it's Brigitte Lin Ching-Hsia's Tsao Wan, the idealistic patriot willing to go against her father to save her country, friends and innocent bystanders, who now better represents Hong Kong.


The beloved only child of General Tsao (Kenneth Tsang), an autocratic warlord ally of Yuan Shi Kai, Tsao Wan is tasked by her republican comrades with procuring a document that she knows if lost by her father, will result in his losing his privileged position and possibly more.  Over the course of the film, she is made to feel more psychological and physical pain than she probably had ever realized would be the case.  Still, come movie's end, this inspiring figure stayed intent on working for the greater good of her country, and hopeful that the day would come when the on-going battle would not only draw to an end but also be won by her side.

Although she may never have represented Hong Kong in the past or present, Sally Yeh's Pat Neil, the aspiring Peking Opera performer whose life is irrevocably changed after she gets to know Tsao Wan and Sheung Hung, also is able to impart valuable lessons to contemporary Hong Kongers.  After befriending complete strangers who she only decided to help in the first place because they shared a common enemy, she proves to be a loyal ally -- and turns out to be the incorruptible moral compass of the overall story.

Back in 1986, Peking Opera Blues' director-producer Tsui Hark and scriptwriter Raymond To couldn't possibly have foreseen the coming into being of the Umbrella Movement -- and that, during and in the wake of these pro-democracy protests, many young Hong Kongers would find themselves swept up by a series of tumultuous events and having to go against their parents when upholding their political ideals.  What history did teach them though, and they proceeded to effectively communicate in the concluding lines which exist on the film's 35mm prints (but, sadly, don't appear in any of its DVD editions), is that victories for either side often end up being less permanent than may be realized at the time and what ensues further down the line may well be something that is beyond contemporary imagination.
Posted by YTSL at 11:53 PM

Nice write-up of this our beloved film.

Thanks! I wondered if anyone else thought what I wrote in the blog post made sense... ;)

And yeah, if there were any doubt, I still love the only Hong Kong movie that you and I both rate as a perfect 10 very, very much.

Years ago, when I first became interested in HK cinema, BRNS was the first online sight my search engine sent me to. The reviews (including links to other sites) I read there, began what is probably a lifelong interest in the dynamism of HK cinema.

Reading this current post, I see that your passion for this film hasn't diminished since you first reviewed it...For me, it is the action direction of Ching Siu Tung that propels this film through to its conclusion. I think Tsui is an uneven director, but POB is an exception. Whenever Hark and Ching Siu Tung collaborated on films, they frequently produced magic. In the case of POB, it is thrilling to watch the characters escape from the oppressive (paternalistic) atmosphere of the theatre.

Re "Peking Opera Blues": what makes this film for me is Brigitte Lin... but, actually, also Tsui Hark, Ching Siu Tung, scriptwriter Raymond To, cinematographer Poon Hang Seng, composer James Wong, so many other members of this wonderful cast... Put another way: there's so much about this film that I really love!

BTW, my first year in Hong Kong, I interviewed Raymond Wong (for a dance drama he was directing). At one point, he said to me, "I'm not sure if you've heard about a film that I scripted called "Peking Opera Blues"..." Before he could continue, I couldn't help but blurt out and tell him that "It's my favorite movie of all time!" ;b