In the presence of great art at Obuse's Hokusai Museum 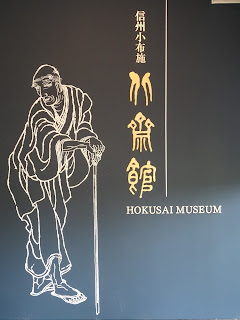 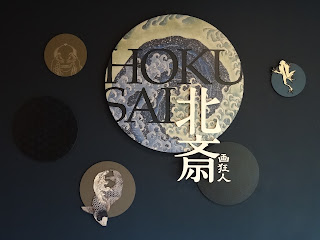 The museum contains many splendid works by the great artist who
went by as many as 30 different names, including Katsushika Hokusai 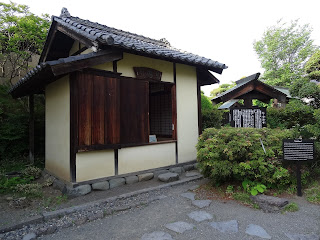 And at the nearby Takai Kozan Memorial Museum, visitors can
see the small studio where Hokusai worked when in Obuse
After spending time admiring Hokusai's Great Ho-O Staring in Eight Directions and more at Ganshoin, I took a leisurely stroll into Obuse's town center using a route that further confirmed to me that it is one picturesque settlement.  Predictably, my next stop that day was the Hokusai Museum, which is home to many beautiful works by Hokusai; and not just woodblock prints but also paintings and also the only three-dimensional art that this extremely productive artist created.


Although there appears to be a growing international trend for art museums (including the wonderful Rijksmuseum) to allow photography inside its galleries, the Hokusai Museum is like such as the Adachi Museum of Art (that's home to the largest, and probably best, collection of paintings by Yokoyama Taikan as well as a series of amazing gardens) in still prohibiting photography within their walls beyond the entrance and reception area.  And like the Adachi Museum of Art, I found this well-curated museum's gift shop rather frustrating because it didn't have available postcards and such of the displayed works in its collection that I loved most (but don't appear to be as popular or famous as certain others).


Don't get me wrong: I stood mesmerized for minutes in front of Hokusai's rightly celebrated Fujikoshi-No-Ryu (Dragon Flying Over Mount Fuji), which I got to appreciating even more after learning via one of the museum's pair of introductory videos that he painted when he was 88 years old, and might represent the artist (who was born in the year of the dragon) still bidding to reach greater heights.  And I did greatly aesthetically appreciate his vibrant Onami (Masculine Waves) and Menami (Feminine Waves) ceiling paintings of festival floats even while being rather amused by how I could see phallic and yonic shapes respectively in those images!


But my absolute single favorite of the works I saw at the Hokusai Museum was the artist's super detailed Landscape with 100 Bridges.  And even while there are undeniably standout pieces among his many depictions of Mount Fuji, I actually warmed more to the prints I saw from his A Tour of the Waterfalls of the Provinces woodblock print series; not least because he was able to depict falling and foaming water in such incredibly varied ways.


All in all, I truly felt privileged to have been able to be in the presence of all that great art, and be able to view them up close and at the pace of my choosing.  (Oh, and it was such a pleasure that the place was generally pretty quiet and uncrowded.)  Still, I do wish I could rely on more than just my memory to remember those masterpieces by, and my words to vicariously share them with this blog's visitors.

Also, while I did appreciate being able to go and have a look over at the Takai Kozan Memorial Museum (named for Hokusai's Obuse patron) at the modest building where Hokusai lived and worked when he was in town, the real Hokusai-related bonus for me was that the Hokusai Museum happened to have a special exhibition on when I visited which featured works by some of his disciples -- one of whom happened to be his daughter (and sometime collaborator) Oi, whose story I had learnt about late last year via a Hong Kong Asian Film Festival screening of the elegiac Miss Hokusai. :)
Posted by YTSL at 10:02 PM