"No reservations" dining in Nagano 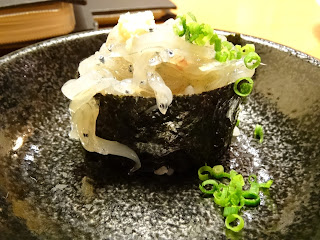 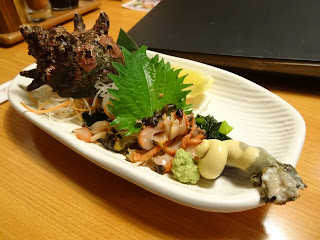 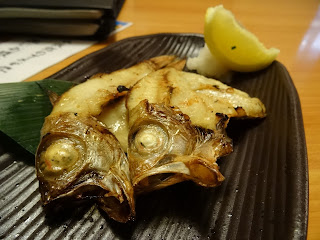 I actually thought I'd be getting just a fish head but
it turned out to be a dish consisting of two big headed fish! ;)


Before my recent Japan trip, an über foodie friend who would be visiting the Land of the Rising Sun around the same time and I got to talking about our dining plans when we were there.  She also showed me her dining itinerary, which consisted of already pre-booked meals at various high-end restaurants, including various sushi-ya where one needs to make reservations very far in advance and more than one restaurants serving beef (be it as yakiniku or sukiyaki).


Although I agree with her that sushi -- probably my favorite food in the whole wide world -- is a "must" to eat when visiting Japan, I told her that I prefer to be more spontaneous with regards to deciding where, what and when to eat.  So I had booked only one meal ahead of this Japan trip (more on that in another post) and had earmarked two other places to go eat (but had not booked a specific time and day to turn up there).  And still I think I ended up faring pretty well in the dining stakes!


As an example, my first lunch in Nagano was at an eatery located on Chuo-dori, the main road I walked along to get to Zenkoji.  Looking for a cool as well as light meal to sustain me for an afternoon's worth of sightseeing and walking, mainly in the sunny outdoors, I went into a soba restaurant that turned out to offer handmade Shinshu soba -- a prized regional specialty.  Despite the place looking on the casually furnished side and its prices being very reasonable (with my total bill being 1100 Yen -- i.e., around HK$78 or US$10), I knew this was a serious soba place because it's one of those that, after you finish your dish of cold buckwheat noodles, brings out a pot of soba-yu, the soup in which the soba was cooked, for you to mix with the tsuyu (dipping sauce) and drink!


Although a portion of cold noodles served with not much more than strips of seaweed, grated radish, wasabi (Japanese horseradish) and tsuyu may not seem all that substantial, it not only really hit the spot but sustained me through to dinner time.  While wandering about near my hotel that evening, I spotted big signs for an izakaya (Japanese-style bar-restaurants) specialising in seafood and decided that'd be the place where I'd like to spend a couple of hours happily chillin' as well as filling my stomach.


I never ever figured out the atmospheric izakaya's English name but I was successful in ordering the drinks I wanted (nama biru (draft beer) followed by junmai ginjo sake) as well as some pretty tasty -- even if admittedly strange-looking -- food.  And for those who wonder: actually, I did order a couple of non-seafood dishes along with the seafood dishes pictured at the top of this blog post!

One of these was the fabled Japanese tomato that's sweet even when raw, and tasty when dipped in either Japanese mayonaise or salt.  The other was a dish of even sweeter crunchy cabbage, seasoned with a sesame type sauce and konbu with a super umami kick, that looked so mundane that I didn't bother to snap a photo of it -- but, unbelievably, actually turned out to be my favorite dish of the night! ;b
Posted by YTSL at 6:15 PM

Food looks interesting. Living in a small town one doesn't get to adventure with new foods. So happy our town just open a organic and free trade teas.
Tea is on

Cool to hear re your town having a place with teas on offer now. Do they have lapsang souchong or gunpowder tea available? If you like strong teas, give them a try!

As always your food adventures are fun to read about. Isn't it a surprise when you discover a mundane looking offering turns out to be a tasty favorite.

I'm happy you find my food-themed blog posts fun to read, especially as there definitely will be more of those coming in the next few days and weeks. :)