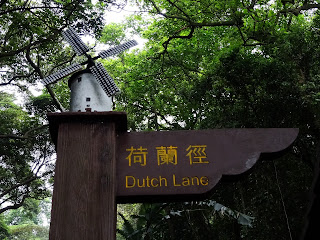 The name of a nature trail in Hong Kong that I went on
for the first time ever this afternoon :) 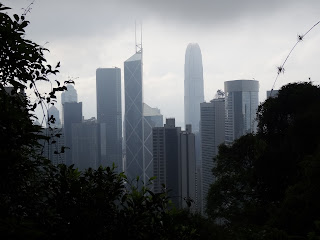 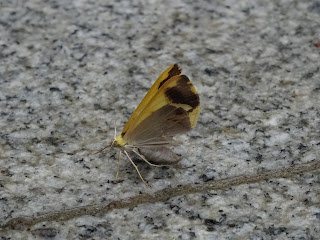 
Up until today, I've only ended hikes in Aberdeen rather than begun hiking from the town that gave its Cantonese name to the whole of Hong Kong.  But after a friend who lives -- but had hitherto not hiked -- in the area asked me to show him how to get to Aberdeen Country Park from the town below, I decided that I might as well take him along an outing that began at one of that country park's southern entryways, then went all the way up to Wan Chai Gap before going down the other side of the hill to Admiralty.


I knew my friend was going to enjoy the excursion when he pulled out his smartphone to take a photo soon after we entered Aberdeen Country Park and caught sight of the lower of its two reservoirs.  And considering how he kept on telling me beforehand that he was not in shape, he proved remarkably willing to keep on going and seeing more and more of the natural side of Hong Kong that often is just meters away from its urban sections!


On the way down from Wan Chai Gap, I saw the sign for Dutch Lane that was put up in April 2012 after some campaigning by the likes of Designing Hong Kong CEO Paul Zimmerman, and decided that the time had come to explore this path that's so named because, for many years, the Dutch employees of the Royal Interocean Lines had regularly walked along it from their company residences to their shipping line's office.  Another friend had previously told me that this path could be accessed from the mini park on Bowen Road.  So the aim today was to connect to Bowen Road via Dutch Lane rather than all the way down via the far steeper Wan Chai Gap Road.

Although the initial section of Dutch Lane that veers off from Wan Chai Gap Road is paved, things soon got considerably wilder along what apparently (also) is part of the 700 feet contour line of the old city of Victoria.  With certain of the unpaved sections of this trail also being on the narrow side, I often found myself focusing my attention on the ground.  Still, every once in a while, scenic views of the city below would get me stopping to enjoy the sight of some of Hong Kong's skyscrapers down below!

During our trek along the approximately 1.5 km trail, we only saw two other people about.  So it seems that Dutch Lane still isn't all that well known to hikers.  Either that or, as I remarked to my friend, the mosquitoes that we encountered along the way had scared off some folks.  But while I would have preferred for this (part of the) hike to have been pesky insect free, I nonetheless did enjoy checking out yet another trail on Hong Kong Island that shows how nature really is never all that far away in "Asia's World City". :)
Posted by YTSL at 9:58 PM

I'm glad you posted about this trail - I keep seeing the sign-post, but I never walked on it. Where's the end point, if you start at Wan Chai Gap road? How long did it take you to hike? I am tempted to go there, but often I hike up from Hopewell Centre and then would like to continue up to the other side, towards Aberdeen... but it seems I should venture along this trail too, provided that I have got some mosquito spray with me!

According to Google Map (https://goo.gl/maps/ATmLtVZKMaA2) the Dutch path runs between Wanchai Gap Road just below the Gap towards the 庭3 Service Reservoir close to Magazine Gap Road, roughly along the 700 feet contour. The Government GeoInfo Map should have much more information of the area (http://www1.map.gov.hk/gih3/view/index.jsp) Just go there and input Dutch Path at the search box, then zoom in.

As T has pointed out, Dutch Lane runs to a service reservoir close to -- and from which a restricted road connects with -- Magazine Gap Road. But I opted for the branch route close by that goes downhill and ends at a mini park on Bowen Road. It's not a long trail, and shouldn't take more than half an hour to go along -- but please note that you will have to walk slowly and carefully for a stretch that is more like the kind of trail one expects to find inside a country park that outside of it (and which I definitely would bring a child along).

Thanks for the links. Just a note: For the Government GeoInfo Map (and I'm going to assume Google Map too), one needs to input "Dutch Lane" (not Dutch Path) when searching in English.