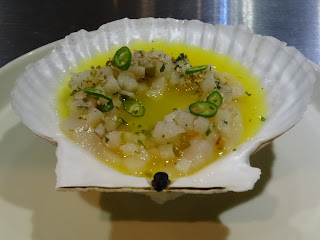 The dish that got me going to Chino twice in the past week! 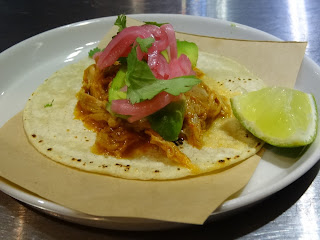 The first of four (small) tacos I ate at last night :)


Today is Cinco de Mayo, a day that few non-Mexicans living in Hong Kong have any inkling is a Mexican national holiday bar for those of us who have spent significant amounts of time in either Mexico itself or its northern neighbor, the US of A.  And while I may not be celebrating the Mexican army's unlikely victory over the French forces at the Battle of Puebla on May 5th, 1862, I feel I finally can celebrate having there now being a number of places where one can get decent, even really good, Mexican (or, at least, Tex-Mex or Mexican fusion) food here in Hong Kong!


As unlikely as it sounds, I was introduced to Mexican food at the age of 9, at the California home of a family whose father's a Hong Kong-born ethnic Shanghainese, mother is a Japan-born ethnic Chinese, and children had been born in the USA.  Right from the start, I decided that Mexican food was really delicious and consequently went on to try -- and eat -- my share of Mexican (and Mexican-influenced) dishes; with particular favorites being the blue corn tortilla dishes that I ate lots of while attending archaeology field school in the American Southwest my sophomore summer.


Just a few years ago, there weren't too many eateries where one could get Mexican (or even Tex-Mex) food in Hong Kong; and indeed, for a time, it was a Wan Chai bar (Agave Tequila y Comida) rather than actual restaurant that was widely held to serve the best Mexican food in town.  But in recent years, many challengers have arrived on the scene -- including a restaurant over in Kennedy Town which I visited for the first time last Saturday and whose food I liked so much that I ended up going and having dinner there again last night!


Purists may sneer but I really do like the food served up Chino (whose name is the Spanish term for "Chinese", and used by Mexicans for all Asians they saw/see, including those from Japan).  A "modern Mexican" restaurant which sources its ingredients from Hong Kong, Japan and Mexico, its Nobu alumnus owner-chef also makes no bones about using Japanese ingredients and cooking techniques -- and providing diners with chopsticks to use (though there are many dishes, such as the many types of tacos on the menu, that I just go ahead and eat with my hands).


I'm not sure how "authentic" the scallop with citrusy agua chile and pickled jicama is.  All I know is that it's bursting with flavor and is precisely the kind of dish that has the likes of me going back for more.  Oh, and if you order tortilla chips -- or better yet, chicharrónes (i.e.,  pork rinds) -- like my party did on my first visit to Chino, be sure to dip them into the pleasantly spicy "chilly water" to ensure that that tasty liquid does not go to waste!


On my first visit, my party of four had not been able to finish the very generous portion of cochinita pibil (served with tortillas -- with which you can fashion your own braised pork butt tacos -- and rice along with black beans and salsa) that we had ordered along with a few way smaller items.  In contrast, on my second visit, I found my initial order of two tacos along with the scallop starter dish to be insufficient -- and needed two more tacos to feel sufficiently satiated.


Although my wallet was not particularly happy (as Chino charges quite a bit more than most Americans would expect to pay for Mexican food; though, to be fair, one could hardly describe the refined as well as fusion variant of Mexican food it serves up as peasant food), I'm glad in retrospect that I ended up having four tacos in total because I ordered entirely different ones each time and the second batch I got turned out to be tastier than the first batch I had opted for!


More specifically, of the first pair of tacos I went for, the chicken tinga topped with pickled onions and a slice of rich avacado was tasty enough but I actually couldn't taste the pineapple that came with the marinated pork and tomatillo combination.  As for the second pair of I tacos I got: the crispy battered fish was nice and hot (but not too hot), and was not overwhelmed by its chipotle flavored Kewpie mayonaise and tangy salsa topping while the ox tongue with pickled jalapenos and chile de árbol to give it a little "kick" was my favorite of the night -- with probably my only criticism being that the portion of ox tongue (as with everything else) was just not as large as I would have liked!

As previously alluded: Chino is not cheap (for the kind of food -- and, particularly, drinks -- on offer and the portions generally served).  It also has the sort of hipster vibe that can turn some people off (including two friends of mine who refused to there with me when I asked them some months back).  In truth, I don't think I'll be going there in the future anywhere as often as I've done so this past week.  But the next time that a craving for Mexican food strikes, that's probably where I'll head once more! ;b
Posted by YTSL at 11:59 PM

I only got a taste of good Mexican food when in USA. Fish tacos turned out to be a favorite meal (and the best I ate were in San Diego). Now I order them whenever I'm in a Mexican restaurant (sadly not very often)

I've eaten Mexican (or, rather, Tex-Mex) food in England and Malaysia as well as the USA and Hong Kong. The US was, of course, where I had the best Mexican food I've eaten -- but Chino's really not that bad taste-wise! :)