The Kid from the Big Apple actually is far more Malaysian than American! (film review) 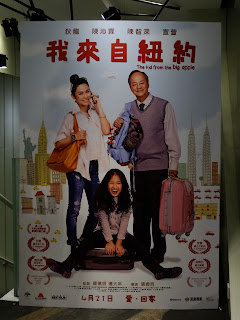 Does this look like a Malaysian movie to you?


When I was a kid growing up in Malaysia, I never ever imagined that one of my screen heroes, Hong Kong movie superstar Ti Lung, would ever appear in a Malaysian film, much less one that I'd view at a Hong Kong multiplex.  Among other things, Malaysia doesn't possess a particularly renowned -- or, for that matter, prolific -- national cinema, and the majority of films produced by this country have the national language, Bahasa Malaysia, as their main language rather than one which a Hong Konger like Ti Lung would be fluent in.  Also, it's more usually the case that Malaysians (including Michelle Yeoh, Lee Sinje and Angie Cheung) go to Hong Kong to make movies rather than vice versa.


As it turns out though, the Malaysian-Hong Kong co-production in which Ti Lung (credited in the film as Tommy Tam) and another Hong Kong thespian, Jessica Hester Hsuan, appear in principally makes use of Mandarin and also contains far more English than Bahasa Malaysia dialogue; this even though The Kid from the Big Apple is largely set in Kuala Lumpur (rather than New York City or, say, Hong Kong), and I personally have found Malaysia's largest city to be a part of the world where one is far more likely to hear Cantonese as well as Bahasa Malaysia and English being spoken than Mandarin.
A cross-cultural family drama which revolves around an Asian American pre-teen who gets parked for a time with her Kuala Lumpur-resident grandfather while her Malaysian-born single mother goes off to do some work in China, The Kid from the Big Apple starts off with Sarah (Sarah Tan Qin Lin) and her mom, Sophia (Jessica Hester Hsuen), arguing in English, then has Sophia speaking with her father (Ti Lung) in Mandarin, and the old man -- somewhat understandably, given the circumstances -- not realizing for a time that his granddaughter is actually bilingual.


Early on in the film, some comedy ensues from such as Sarah's grandfather regularly mispronouncing her name as salah (the Bahasa Malaysia word for "wrong") and a young neighbor enlisted by the old man to be his interpreter when talking to his grandchild turning out to be able to only speak "Manglish" rather than the more conventional form of English that Sarah is used to.  But The Kid from the Big Apple really only becomes fun and enjoyable to watch after its titular character morphs from sulky child to one who shows that she's got a nicer, more caring side.  (Also, I much prefer to hear Sarah Tan speaking Mandarin -- like she does more and more the further along into the film one goes -- as her English is too Malaysian-sounding for her to truly convince as an Asian American.)


Largely taking place within a low-rise residential complex in the Kuala Lumpur suburb of Cheras that appears to be almost entirely populated by ethnic Chinese families, this movie -- which shows culture clashes between the traditional and modern as well as Western and Asian -- benefits enormously from strong performances by veteran actor Ti Lung and 11-year-old Sarah Tan, and there being a definite chemistry between the two of them.  If truth be told though, I actually think that 14-year-old Jason Tan -- whose first film appearance this is (as also was the case for Sarah Tan) -- pretty much steals the show as Jia Bao, a big-hearted boy who proves to be the bridge between the traditional Chinese grandfather (a  pillar of his community and professional bonesetter who's regularly addressed as sifu (master)) and his thoroughly modern, social media-adapt grandchild.


A sincere film offering up plenty of heart and soul that manages to overcome its technical flaws, The Kid from the Big Apple is remarkably watchable, especially when one considers that this is the first directorial effort of Jess Teong (who also scripted the work).  And even while I have to admit to feeling somewhat uneasy about how the offering seems angled to be more culturally Chinese than Malaysian (despite the movie largely taking place in Malaysia), I do appreciate its messages about how smartphones can -- and should -- never replace face-to-face interaction, and that certain traditional ways do -- and should -- endure in this (post-)modern age; and really like that Jess Teong was largely able to get her points across in a way that is often entertaining and sometimes even downright moving.

I hope this film becomes available on dvd in the West because having an iconic actor like Ti Lung in a non-martial arts movie set in the magical land of Malaysia sounds quite interesting...Ti Lung has such a strong presence as an actor that I recall in classics like Blood Brothers, The Magic Blade and A Better Tomorrow.

Since "The Kid from the Big Apple" has had commercial screenings in Hong Kong, I'm hopeful that it'll be available on DVD in the West the way that (most) contemporary Hong Kong movies are.

Actually, Ti Lung (briefly) shows some martial arts moves in this movie. And there also are some old photos of him that made me gasp -- because they made me remember how handsome he was back when he was a Shaw Brothers movie star.