The joys of bike riding in Hong Kong's New Territories :) 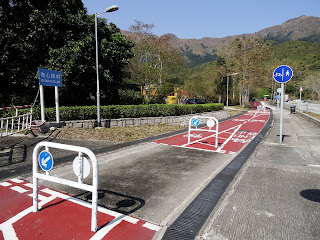 There are some nicely laid out bike paths in
Hong Kong's New Territories :) 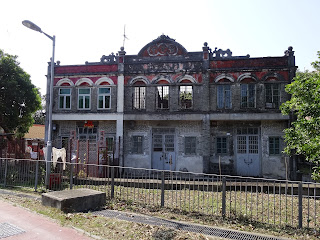 It was hard to drag myself away from the Shuen Wan Typhoon Shelter's
breakwater after seeing the awesome views to be had from there :)

Today has seen some of the finest weather in weeks, and got me thinking of another beautiful day some time ago during which I went on my second bicycle ride in Hong Kong!  After having thoroughly enjoyed bicycling between Tai Wai and Ma On Shan (after returning from a visit to The Netherlands, where I saw tons of bicycles and bicyclists!), I did some biking between Tai Mei Tuk and Luen Yick Fisherman Village (over by Sam Mun Tsai New Village).
Originally, I had intended to bike from Tai Mei Tuk to Tai Po -- but I got distracted by the sights over by Sheun Wan Typhoon Shelter and also realized that I was happy to prolong my bicycling time by turning back to Tai Mei Tuk and, for good measure, riding up and down the Plover Cove Reservoir's main dam twice for added exercise!  Also, I figured that the scenery on the route I had chosen was so attractive that it was worth checking out twice in favor of passing through Tai Po's industrial estate on the way to its town center!
Although I've actually been in the area before, I got to discovering "new" sights courtesy of my going at a pace that wasn't only slower but which I could dictate when biking rather than breezing by on a bus or an even speedier green mini bus.  Among other things, amidst the many newer village houses that have sprung up along Ting Kok Road are to be found some interesting looking buildings which date back to the 1960s, at least one of which has red stars on its front that look to designate a pro-Communist Chinese affliation (like another building from the same period over at Kuk Po).  In addition, I got to see Tsz Shan Monastery and its giant Guan Yin statue from a whole variety of angles!
Best of all were the views to be had from the breakwater of Shuen Wan Typhoon Shelter that one can easily ride one's bicycle on to.  While the surrounding natural landscape was pretty stunning, I also was fascinated by the human activity that I saw going about.  Over in Tolo Harbour, there were fishing craft and fishermen going about their business.  And on both sides of the breakwater, boats manned by Country and Marine Park Authorities officers regularly patrolled the waters and a smaller boat puttered by, helmed by an old woman wearing a straw hat that marked her out as a Hakka fisherwoman and made her look like she come out of an old tyme photo of Hong Kong.

When fellow blogger bluebalu interviewed me a while back and asked me for tips for people who come to the Big Lychee regularly, my reply included the suggestion that, if one wanted to, one could (temporarily) “escape” from Hong Kong's concrete jungle by going to other parts of the territory.  In the case of the bike ride between Tai Mei Tuk and Luen Yick Fisherman Village: not only does it get you into far more rural sections of this part of the world than many people may realize (still) exist -- but it also will show you that Hong Kong's heritage and traditional ways are still alive, and not just confined to such as the exhibition halls of the Hong Kong Heritage Museum or Hong Kong Museum of History! ;b
Posted by YTSL at 7:35 PM

Quite few place are having bike service. The town south of me now have a couple of bike service.
What a great way of getting about.
Coffee is on

Cycling is cool when the terrain is on the flat side. So much of Hong Kong is hilly but thank goodness there are some flat bits that also are pretty scenic. :)

Looks like an interesting place to explore on a bike.