A stroll along the Quarry Bay Park waterfront promenade 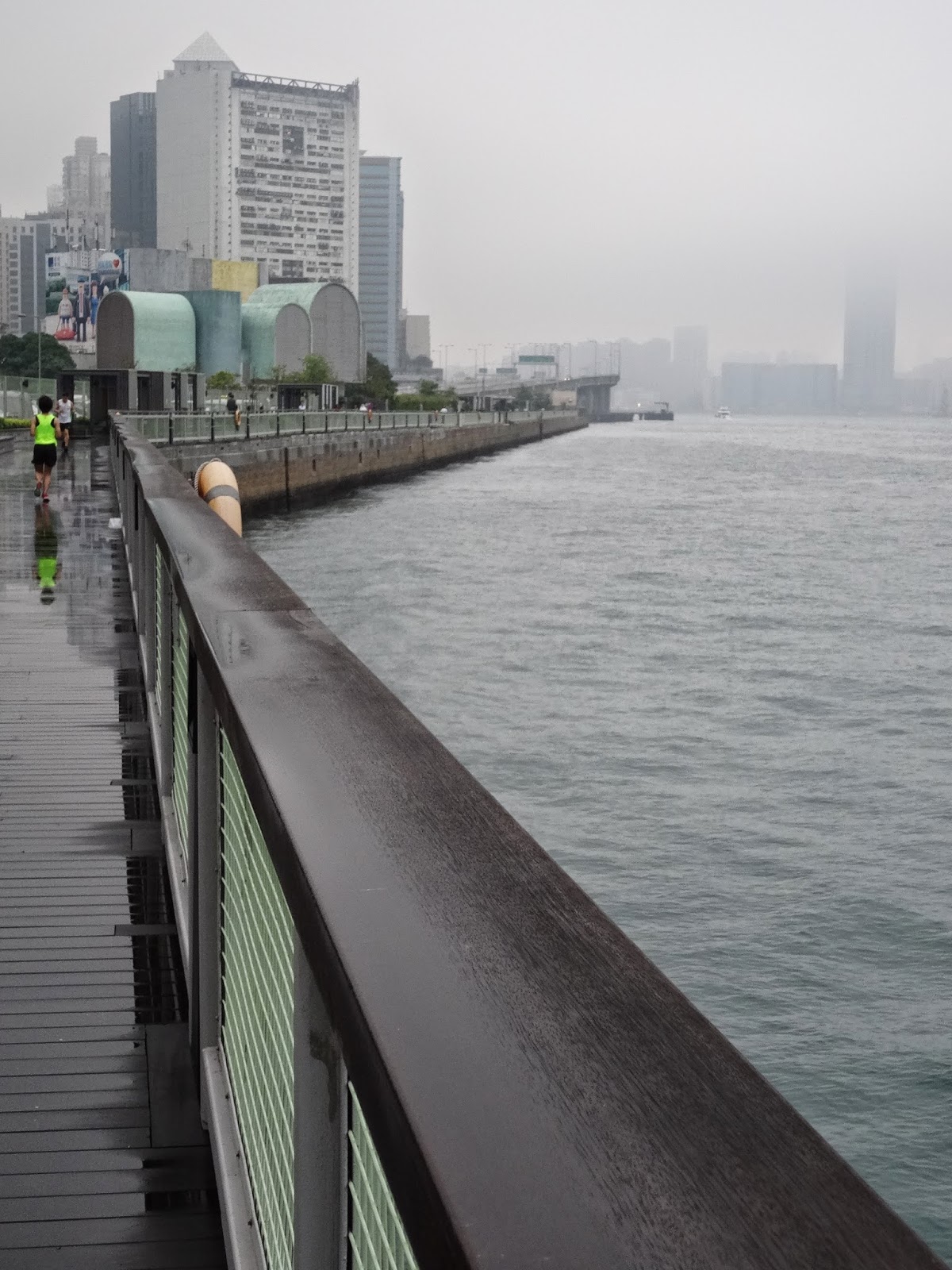 When the weather's not great for hiking, consider
strolling along a waterfront promenade instead! ;) 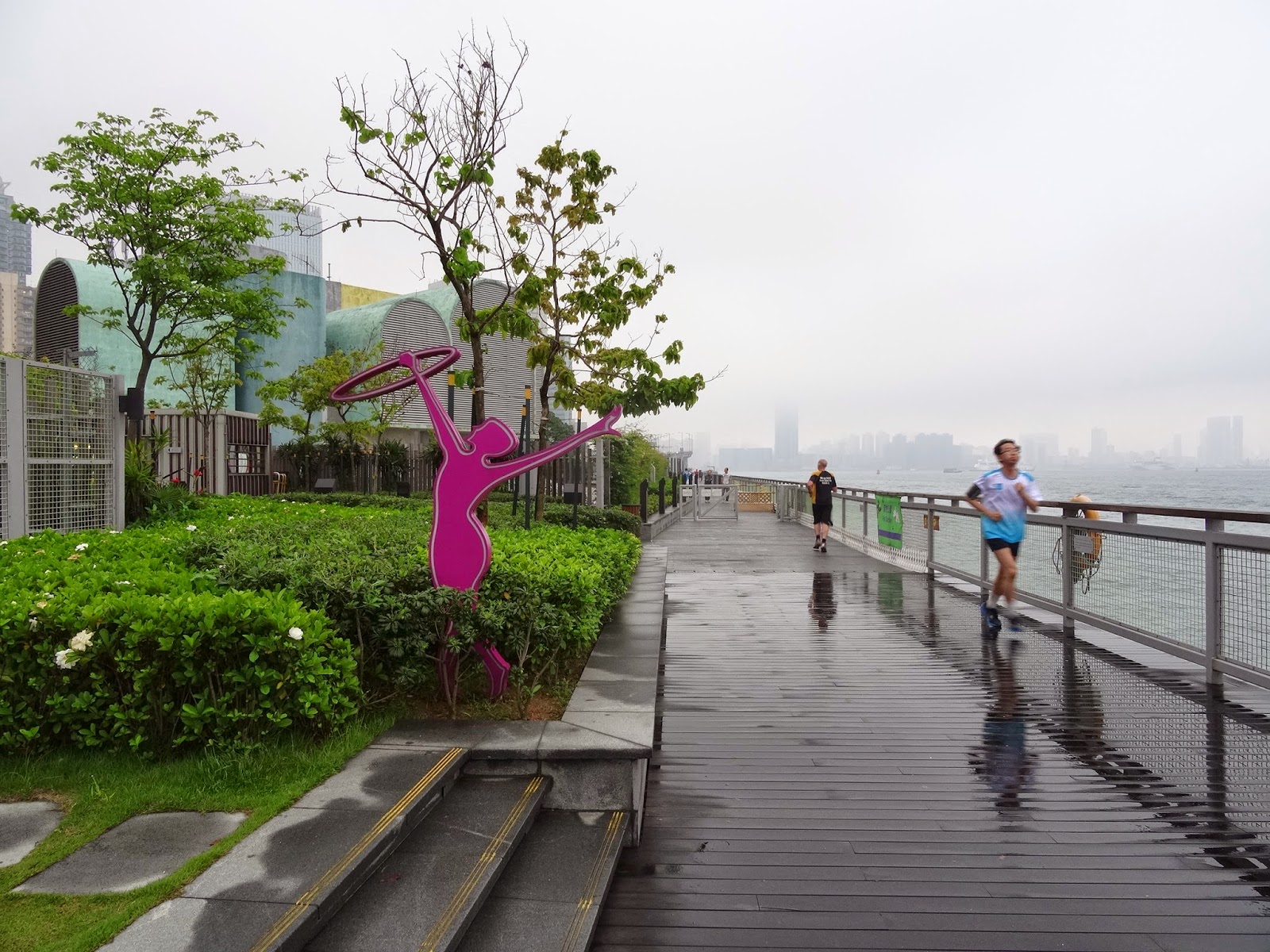 Recently, the Hong Kong Observatory changed its 7 day weather forecast feature into one that extends to 9 days. Honestly though, I don't know why they bothered -- seeing as they frequently can't even get the next day's forecast correct.


For example, last weekend, I almost didn't go hiking because on Saturday, the forecast for Sunday said that there'd be thunderstorms -- only to find on Sunday morning that the forecast had been revised to be thunderstorm-less whereas this weekend, it was the other way around -- so even while I had planned to go hiking today, I woke up to rain and a text message from one of my hiking buddies letting me know that it also was raining in his part of Hong Kong.


By the late afternoon, the rain had pretty much stopped though.  So, especially with the temperatures being in the low 20s on the Centigrade scale, I decided to go for a stroll on the waterfront promenade that stretches almost uninterrupted (except for about a couple of hundred meters or so at Sai Wan Ho) from Shau Kei Wan all the way to North Point.


From Sai Wan Ho to North Point, the promenade is located within the pleasant Quarry Bay Park (that, among other things, is now home to the fireboat Alexander Grantham).  I've walked along the original section that goes from Sai Wan Ho to Tai Koo Shing before but this afternoon was the first time I went along the extension that was opened in December 2012.

Despite my visiting on a gray day, color me impressed with it.  Like the rest of the park, it comes across as a welcome leisure spot that area residents happily make use of -- particularly joggers and fishing enthusiasts, and also those out for a casual waterfront stroll as well as pet (specifically dog) owners.

A while back, a friend of mine had complained that there's a lack of flat trails to walk along in Hong Kong.  If we had the same conversation today, I'd be able to recommend this waterfront promenade stroll as well as the longer stroll I took a few months back from Repulse Bay to Aberdeen, the circular walk around Victoria Peak and a few more! :)
Posted by YTSL at 11:20 PM

It sounds like a good place for jogging/running, even though I live in Hung Hom.

IMO there are lots of such flat and easy walks around. Well, if you count some sidewalks of major or minor roads around.

I frequented Kwun Tong to Tsim Sha Tsui via Kowloon Bay, Kowloon City and then the Tokwawan water front after work as an exercise.

The Southern HK Island walk should also be consider such an easy walk despite there are sections of it going up and down. I was talking about the seaside route from Stanley to Aberdeen, which could also be extended to Cyber Port, Sandy Bay, and beyound.

I think the distance may be too short for you but if you want a short jog (by your standards) and a change of scenery, then you may enjoy it. :)

I'm with you on walking, not jogging! ;)

Nope, am not counting sidewalks of major and even minor urban roads! Also, re Stanley to Aberdeen... hmmm, where does Chung Hom Kok fit in that picture? ;)

BTW, another nice flat (for the most part) walk: Shek Kong to Ho Pui! :)

The Standley to Aberdeen route bypassed Chung Hom Kok and goes up the gap where Chung Hom Kok Road meets Stanley Gap road, then go down to South Bay Road. Not all the way along the coast though. I remember I have a logged a GPS route for this before.......

As for sea side walk on Kowloon Side, you may start at Laguna Verde and go towards Tsimshatsui. All along the coast except when it pass through Hung Home terminus where you have to go up a foot bridge and an escalated walkway until you reached Tsimshatsui East.

Another seaside route might be there after the Kai Tai area is fully developed. That would be quite a few years to come.

Thanks for the tip re the Laguna Verde to Tsim Sha Tsui seaside walk. May do so one drizzly day or hot summer's day when I can't find a hiking buddy.

One more scenic seaside route: Tsuen Wan to Sham Tseng -- though I have to confess that I didn't go as far as Sham Tseng myself, only to the Airport Core Programme Exhibition Centre located between Gemini and Hoi Mei Beaches. :)

Just sent you the GPS recorded route from Stanley to Aberdeen. Please import it into Google Earth for viewing.

Have you done the lengthy promenade on Tsing Yi, along Rambler Channel stretching both directions from the MTR station? There's also a bit of promenade between the Macau Ferry Terminal and Sun Yat Sen Memorial Park Sports Center in Sheung Wan/Sai Ying Pun, good for maybe a 15 minute walk :)

This post nicely complements your previous urban walks, Repulse Bay to Aberdeen and the Central Promenade. It's reassuring that pedestrians haven't been totally cutoff from the waterfront. After all, Hong Kong was, is, and always will be - a port city!

Concerning walking in Hong Kong, I recently read Cities Without Ground, A Hong Kong Guidebook, about the network of footbridges and passageways that allow walkers to connect to offices and malls without having to use the streets. Example: they explain how you can "walk from the Macau Ferry at Shun Tak Centre through Central and Admiralty to Pacific Place 3 on the edge of Wan Chai" - all without having to dodge traffic at street level!

Thanks for emailing that GPS route to me. Will look at it soon.

As for the 15 minute Sheung Wan walk: sorry, but it's too short for me... but I've also done some urban exploration in the Kennedy Town area that's included its praya and other waterfront areas...

And have you checked out the Kwun Tong waterfront promenade yet? ;b

Yes, it is indeed nice that there are some waterfront spaces where one can walk along -- but it'd be nice to have more!

As for the footbridges and over-ground passageways: I've walked along a good chunk of them. And yes, they can indeed be convenient -- once you know how and where to get onto them... :)

The Kwun Tong waterfront promenade is short at the moment, but there's a lot of hoarding up and it looks like they're in the process of adding on a sizable stretch.

The one time that I was in the area, I saw a couple of bridal couples having their photos taken there. Guess it's more for that than for strolling along at the moment! ;b

The Kwun Tong Promenade is sort of completed for about a month.

It is rare to see patches of grass in town these days and visitors are encouraged to walk on them. One disturbing proposal is that the District Board is proposing to build a musical fountain somewhere along the Promenade there.

I am not particularly fond of fountains as they are energy hogs. Anyway, go and have a look around. It is not a long walk. If you start from the ferry pier, it shouldn't take you long to reach the end towards Kai Hing Road.

Thanks for the update. I walked along the then uncompleted promenade a couple of months ago and noticed some work going on.

I'm not a big fan of fountains either -- or, for that matter, much of the publicly commissioned art in Hong Kong. Also, a musically inclined friend of mine wasn't too impressed by the music restrictions there -- apparently, you have to get permission to play any music at the promenade -- but reckoned it's a nice place to hang out and drink a beer some time... ;)