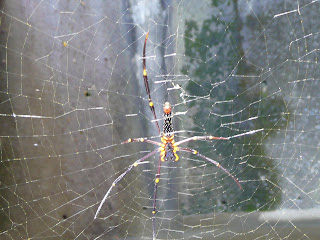 Now that my blog has become public (by way of my announcing its existence to a few trusted friends ;) ), I should explain how it came by the title that it has. In order to do that, I would like to bring you readers down Memory Lane with me: more specifically, to a time -- and place -- when being a student of anthropology was how and what I primarily defined myself as being; and when the writings of Clifford Geertz and interactions with Ruth Peterson significantly impacted my life.

In the fall of 1986, I became a student at Beloit College, a small (i.e., circa 1,000 students during my time there) liberal arts college located in the small town (population 35,775) of Beloit in Wisconsin, U.S.A. My reasons for choosing to spend my undergraduate years at this apparently obscure education institution located in nowheresville are many -- and, I will maintain to this day, sound plus justified.

Suffice to state for now though that I -- who went on to chair an organization called Students Active for a Better Education (SABE) -- in my junior year there :b -- liked that the College proudly billed itself as being "a place where learning is taken seriously for its own sake" and, as well, that it possesses a stellar anthropology program, one that is regularly listed in the top five of undergraduate institutions in the U.S.A., regularly offers "field terms", and whose alumni include the legendary Roy Chapman Andrews (among other things: the former director of the American Museum of Natural History who purportedly served as the model for Dr. Henry "Indiana" Jones, Jr.!), along with probably the highest museum:student ratio of any college or university (i.e., 2:1,000)!

On my arrival at Beloit, I found that I had been assigned as my first year advisor a woman named Ruth Colman Peterson who was Director of Academic Advising but also Registrar Emeritus and a Beloit College graduate from the class of -- yes, really! -- 1938. Coming as I did from not only a quite traditional Asian background but also two years at a conservative English boarding school, I couldn't help but be intimidated by this senior personage's physical age as well as official position. So it came as a bit of a culture shock when soon after our meeting, the woman I had been addressing as Ms. Peterson told me, with eyes twinkling: "Please call me Ruth. "Ms. Peterson" sounds old..." At which point I had to bite back my reaction of "But you are old!"

As Ruth was to teach me to recognize though, just because you're old in terms of age, it doesn't mean that you're old in the sense that you're a fossil, no longer relevant and no longer capable of doing, enjoying life and enjoying learning new things -- and hearing about younger others' discoveries and experiences -- even while also being well able to impart nuggets of wisdom in such an understated, modest way that one only truly appreciated them sometime after the fact and only upon thinking back. Something else that Ruth taught me was that respect is something that shouldn't necessarily be given to people just because they're old but, rather, because some of these old people really can teach what seem like new tricks to younger, less experienced folks.

Above all though, Ruth taught -- nay, showed -- me that bonds can form across such as generational divides. And so much so in our case that I often felt that, even after she ceased to be my official advisor, she -- who also comes from a different geographic, cultural and religious background from mine -- remained one of my biggest cheerleaders as well as a valued mentor and friend.

For example, Ruth (who, it turns out, also was commissioner of the Midwest Athletic Conference!) was among the folks who encouraged me to develop my previously solely armchair-love of association football (soccer, in American English) into one which saw me turning out for a State Championship-winning varsity team -- for the record, the Beloit Women's Varsity Soccer Team were Wisconsin state champions my freshman year :) -- and playing, as opposed to just watching, organized soccer for 18 more years than I ever envisioned would be the case prior to meeting her! And I get the distinct feeling that my election to Mortar Board (a national honor society for which she served as advisor) and Phi Beta Kappa made her happier than it made me!!

In short, Ruth Peterson inspired me with her humanity and touched me greatly. Thus, it was with great sorrow that I learnt -- via a letter from Beloit College President John E. Burris which only reached me in mid November -- that Ruth passed away on October 28th, 2006.

The news of Clifford Geertz's demise on October 30th, two days after Ruth, also came as a shock. And with it came a sense that yet another door had been closed on a part of my life that now can feel like it happened in another lifetime or universe.

For the record, I only met Clifford Geertz twice, and neither of these occasions occured at Beloit. (Instead, the first time was at a seminar on museums at Princeton University, and the second was at a talk he gave at the University of Pennsylvania's anthropology department.) However, Beloit was where I was introduced to the thought- provoking works and articulate writings of -- in the words of another distinguished anthropologist in Elizabeth Colson -- "one of the most original and stimulating anthropologists of his generation".

Unlike too many anthropologists working today, Clifford Geertz is -- was -- someone who could write well, and whose essays, articles and books are read by -- and are deemed relevant to -- more than just anthropologists. Frequently labelled as a "symbolic anthropologist", I latterly came to see him more and more as, above all, a humanistic anthropologist. By this, I mean that unlike those who seemed more intent on showing (up) their fellow humans to be political or economic -- or sexual -- animals above everything else, he looked to emphasize humans' humanity, what makes a person human, in his studies and writings.

Regrettably, much of Clifford Geertz's writings may not make much sense -- or seem to have that much weight -- when viewed out of context. Hence my reluctance, until now, to quote him at you. However, if only to give people some idea of some of the ideas he introduced to me and which I continue to believe (and, indeed, use as guides along the path towards achieving greater humanity):-

"[M]an is an animal suspended in webs of significance he himself has spun" (From The Interpretation of Cultures: Selected Essays, 1973:5)

"...the image of a constant human nature independent of time, place, and circumstances, of studies and professions, transient fashions and temporary opinions, may be an illusion[. Instead,] what man is may be so entangled with where he is, who he is, and what he believes that it is inseparable from them." (From The Interpretation of Cultures: Selected Essays, 1973:35)

"We are, in sum, incomplete or unfinished animals who complete or finish ourselves through culture -- and not through culture in general but through highly particular forms of it...Man's great capacity for learning, his plasticity, has often been remarked, but what is even more critical is his extreme dependence upon a certain sort of learning: the attainment of concepts, the apprehension and application of specific systems of symbolic meaning." (From The Interpretation of Cultures: Selected Essays, 1973:49)

"[M]an [is] a symbolizing, conceptualizing, meaning-seeking animal...The drive to make sense out of experience, to give it form and order, is evidently real and as pressing as the more familiar biological needs." (From The Interpretation of Cultures: Selected Essays, 1973:140)

To sum it all up: I see this blog as one way of actively, even if sometimes retrospectively, looking for meaning in, and making sense of, my experiences, past and present, in order to achieve greater humanity and understanding. In doing so, I weave webs of significance even while I try to identify -- and untangle plus deconstruct -- other webs of significance which I have already gone ahead and woven...Hence my Clifford Geertz-inspired decision to bestow the name on it that I have done. :)
Posted by YTSL at 12:30 PM

Whoa, I appreciated reading this very much - thank you for taking time to pay tribute. It's been years since I read Geertz in an anthro class w/ doug foley. his writing flowed with immense humanity unlike most others, but the warm fuzziness was as residual as the the intellectual buzz he left for the reader.

Thanks for reading. And "absolutely" re Geertz's writings flowing with immense humanity unlike most others. All in all, many anthropologists (and academics and writers, for that matter) would do well to try to write -- and think -- more like him.

On a lighter note: what a delicious monicker you've got... ;b