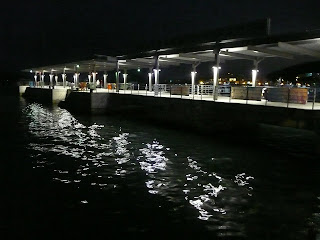 One of Sai Kung's piers brightly lit at night 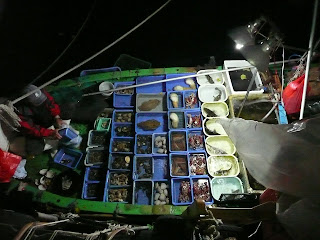 One of the boats anchored near the pier and promenade
from which a variety of sea creatures are offered up for sale
Back when I was still living in Philadelphia, I viewed a modest Hong Kong movie that helped me to realize that the Big Lychee is not all concrete jungle. Sai Kung Story may not be a cinematic gem but the 2003 drama still contained enough visuals and other elements that made me want to visit the Sai Kung District -- and this even before learning, like I got to doing after moving to Hong Kong, that Hong Kong's second largest district possesses not one but three beautiful country parks in Sai Kung East Country Park, Sai Kung West Country Park (which includes a Wan Tsai Extension) and, also, Clear Water Bay Country Park.

Sure enough, I have indeed checked out quite a few sections of Sai Kung district, starting with Sai Kung town and then spreading out to various parts within the country parks (see examples here, here and here) since then. But for the most part, I've tended to visit during the day and been intent on getting out of the area as quickly as I can post hike to avoid getting caught in the traffic jams (and attendant long wait for mini buses) that regularly afflict Sai Kung town on weekends.

However, when my mother and I were in Sai Kung late in the afternoon yesterday, we discovered that the town was actually quieter and less crowded than on a regular weekend -- the opposite of what I'd have expected of the place on Christmas Day. Consequently, we decided to stay until later than originally planned and ended up leisurely strolling along the waterfront, stopping for a time to buy and consume a packet of freshly roasted chestnuts as well as admire the views, and also doing such as having dessert at the original branch of Honeymoon Dessert in town.

While not quite the night-time adventure that a night in Cheung Chau was for Urban Photo's Christopher deWolf, it still was a pleasant enough excursion. And, if truth be told, for its rarity alone, this low-key Christmas evening will be remembered -- and fondly too -- for quite some time to come. :)

heres wishing you and yours a bountiful season of cheer!!

It sounds like you created some wonderful memories. Often the quiet times especially at Christmas can produce beautiful memories along with relaxing after the rustle and bustle of the season. I loved the night pictures.

I must find this movie!

Beautiful reflections from the pier ! Hope you had a nice Christmas !

Thanks, and I hope your wishes for me and mine come true. :)

Am glad you like the night pictures. Truth be told, there wasn't much rustle and bustle over Christmas -- but am now worried that I won't be able to avoid a crush of a crowd come New Year's Eve!

It's a very modest movie -- so don't want to build up your expectations re it. Having said that, I did think that it's not without its charm -- IMHO, including the now sadly retired Ruby Wong.