The first time I hiked the Dragon's Back, my friends and I began our hike from near the Tai Tam Gap Correctional Institution, then ventured southwards down the D'Aguilar Peninsula to To Tei Wan. But when my regular hiking companion and I went along the Dragon's Back earlier this year, we elected to follow the Hong Kong Trail Stage 8 the right way (i.e., from south to north) as well as all the way from To Tei Wan to Hong Kong Island's Tai Long Wan (Big Wave Bay) some 8.5 kilometers away.

After having done the hike both ways, I can see the attraction of the alternative route as this way, the hike climaxes rather than more or less begins with the best views from the trail. On the other hand, the official route starts with scenic vistas but then has the added bonus of ending at a beautiful beach where one can enjoy the sight of surfer dudes trying to get the most out of waves that may be big by Hong Kong standards but, except when a typhoon nears or strikes, are puny by the standards of, say, Hawaii! ;D 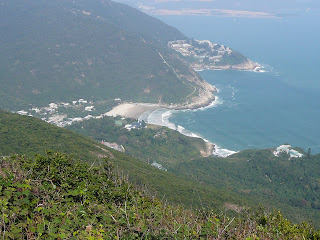 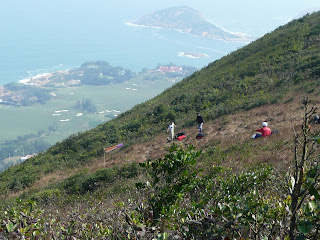 Daredevils preparing to paraglide down the hill 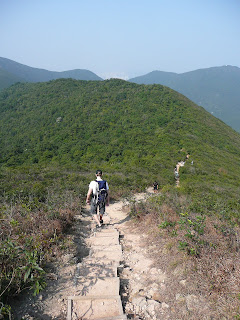 Call me a wimp but hiking a trail like this one
is sufficient adventurous excitement for me! 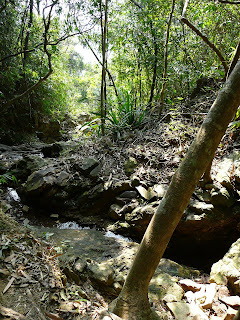 Midway through the hike, the trail goes down
and becomes a forest path that meanders
along the midslopes of Wan Cham Shan Near the northern-most section of the trail,
urban Hong Kong is visible through the trees and shrubs 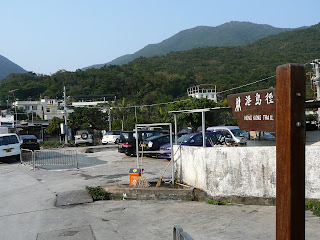 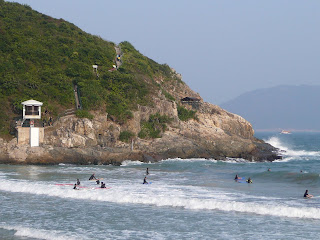 A prettier side of Big Wave Bay -- one where
hiking trail, beach, sea, hikers and surfers meet! 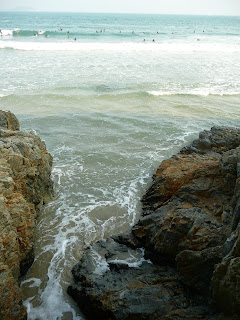 Thus it was that a hike that began with a climb up a hill
ended at a beach where my regular hiking companion
and I spent some time watching the waves and surfers :)
Posted by YTSL at 10:48 PM

Wow, an interesting looking hike with great photos. So you're not taking up gliding or surfing any time soon?

It really is a good hike -- and I'm so glad that the second time that I hiked the Dragon's Back, air was clear enough so that I could get good views and photos. And yeah... surfing's never appealed to me and do wish that my upper body was stronger so I could try my hand at para-/hand-gliding but, alas, that is far from the case... ;(