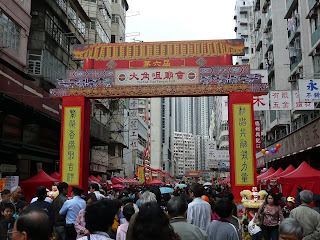 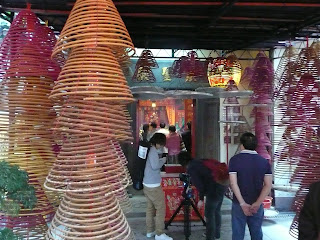 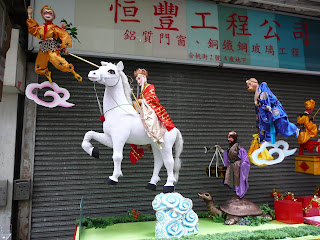 Back in March of this year, I attended the Tai Kok Tsui Temple Fair that's held annually to thank the male deity for which the Hung Shing Temple was built for bringing luck and safety to his devotees. Although it rated a mention on the Hong Kong Tourism Board website, it very much is a local festival -- and its taking place in a Kowloon neighborhood that is off the beaten path for many tourists gave it a particularly attractively authentic feel to my mind.

Something else that I liked about this festival was how eclectic it seemed to be -- with festival activities not only taking place within the small temple itself but also on nearby streets and including stalls selling food, toys and other items, an antique car exhibition, Chinese cultural performances, an old songs-themed karaoke, a 500-feet dancing dragon, and a display of statues of such as the main characters of Journey to the West, a Ming Dynasty epic saga that tells of a master monk and his disciples' adventure-filled pilgrimage from China to India in order to obtain sacred Buddhist sutras.

As I child, I was given a 50 volume comic book version of what I later came to learn is considered to be one of the Four Great Classical Novels of Chinese Literature. I can't remember how long it took me to read all 50 volumes but it couldn't have been too long as I adored them -- and have strong memories of some of those tales to this day.

Consequently, I could easily recognize (from left to right in the third photo from above in this Photo Hunt entry) the mischievous Monkey (AKA Sun Wukong, a Monkey God born from a stone), peace-loving Master Monk (AKA Tripitaka) on his white horse (a transformed dragon king), faithful Sandy (a river ogre -- but a good one!) and greedy Pigsy (a former heavenly commander banished to the mortal world after being found flirting with the moon princess!!) -- all of whom, I really noticed when looking for a suitable photo for this week, are male -- like so many of the main characters of classic novels from the West that I also enjoyed as a child (e.g., Robin Hood, King Arthur and Robinson Crusoe (and his Man Friday))!

Great post for this weeks theme. Sounds like an interesting and fun festival to attend. Great to have memories of the comic book version of the classical novels from your childhood.

i enjoy watching the 'Journey to the West' series. Though many versions have been made, i find Dicky Cheung's portrayal of Sunwukong the best among all.

I always learn something new (or old) here.

It was a low key but still interesting and fun festival to attend -- even though it rained for part of the time that I attended it! And yeah re those memories. Now if only I could find those comic books again... ;S

Fascinating - I always enjoy leanring a bit more about the world by visiting your site.

I love such festivals. A pity it is becoming less attraction to the younger generations.

You always have the most interesting posts! And the festival sounds like a lot of fun!

Thanks for this great post. I love your photos and learning about this very cool festival. Happy weekend!

Very good photos, and interesting to read about the festival.

You always post such interesting interpretations of the weekly theme. I am now really curious about the novel. I checked my local library and they do have two or three versions. I'm going to get a copy to read. I'm also going to look to see if I can find a copy of one of the series or DVD based on the novel. That is harder to do here.

Thanks for visiting and appreciating. :)

Glad I can help you to learn more about the world. :)

Are such festivals becoming less popular among the young in Singapore? Don't see that happening in Hong Kong!

Sounds like you should visit more often then! ;b

*Blush* Thanks for the compliment -- and I did enjoy experiencing that festival (even if I missed out on seeing the 500 feet dragon dance this year). :)

I hope you enjoy the novel and/or TV show that you watch. FYI, "A Chinese Odyssey" (Parts I and II) are inspired by "Journey to the West" and features Monkey as its main character. But be warned that that requires quite a bit of knowledge of Hong Kong cinema as well as Chinese culture to enjoy.

Male deities are so interesting!! what a great festival. Very colorful take on the theme.

Blame the mulled wine for my reindeer's pink cheeks :)

Hi YTSL, wonderful take and photos. Loved learning about this cool festival. China has been on my must see list and reading your blog makes me want to go soon. Thanks so much for sharing

Interesting and fun festival to visit.

Indeed it's full of festive, and you captured them well!

What threatful male gods ! fortunately on the picture they look rather peaceful !
Your first picture reminded me the entrance to Chinatown in London.

Female deities can be interesting too! (And have to say that I have a particular fondness for Tin Hau and her temples here in Hong Kong :))

Hong Kong is indeed politically part of China but I think that culturally, it often is it's own thang -- and yeah, it's my bias but when you visit China, hope you'll make Hong Kong your first stop. :)

Not that threatening -- really!!! Indeed, Monkey God is a lot of fun. :D

I like your take--male deities and male literature heros--on this week's theme. It would be fun to experience the festival. Such old and new: the dragon and karaoke. :-) Happy holidays!

Actually, karaoke's old hat in these parts -- and the funny thing is that the karaoke did seem to generally attract the older crowd while the dragon involved younger folks! :)