At the Hong Kong Brands and Products Expo 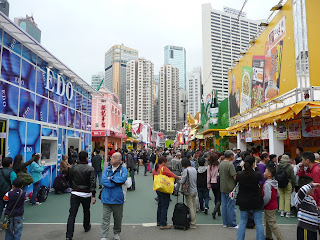 At this year's Hong Kong Brands and Products Expo 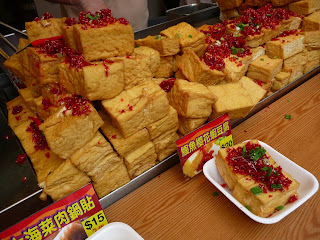 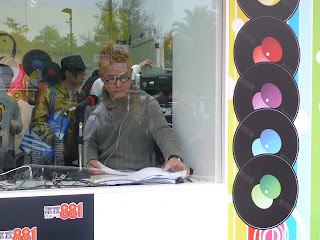 Personalities on view and at work in the radio booth
include the easily recognizable Jerry Lamb :)
As regular visitors to this blog know, my general preference on days off is to head to parts of Hong Kong where I can be far from the madding crowd. However, there are occasions and events where I actually am happy to brave and mingle with the crowds -- or at least am reconciled to having to do so -- because I feel that what's on view in the area is worth the noise and jostling that goes with being around and among hundreds, if not thousands, of people.

One of them is a commemorative event that has taken place in Victoria Park every June 4th since 1989. A happier event that also takes place annually in the Causeway Bay park -- only in the winter -- is the shopaholic delight that is the Hong Kong Brands and Products Expo.

This year, I decided to go and check out the scene there on the first day of the 24-day, 900-booth consumer fair since, as I passed by the area on the way to lunch, I noticed that the crowds hadn't really thickened. Maybe it was because the sky was cloudy and grey and people feared that some rain would fall but I easily got an admission ticket before making my way into the outdoor expo's 28,000 square meters of exhibition space.

Although I'm hardly known for my shopping tendencies and didn't have anything specific in mind to purchase that day, I still came away with some items -- some of which I know were being sold at a bargain price compared to what you'd pay at regular stores. And I also have to admit to enjoying gawking at the stall displays (many of which prominently featured images of celebrity spokesmen and -women (e.g., veteran thespians Kenneth Tsang, Cheng Pei Pei and Nancy Sit) or cutesy anthropomorphic mascots) and the occasional living, breathing local personality who was part of the expo scene.

Still, what really caught my fancy were the cooked foods on sale at the eastern end of the exhibition area. Some items (notably the red chilli pepper topped chunks of fried tofu pictured above) I was content to just look at. But there were others that I couldn't resist sampling -- including pieces of the very local delicacy that is fried tofu topped with salty fish paste. (And yes, I really do love tofu -- that is, except when it's super stinky, appropriately named chao tofu!) ;b

I think I would have gone for the chili tofu. (My mouth is watering.) And I love Cheng Pei-pei, she looks exactly like my brush painting teacher.

In fact, on looking at it again I think that chili tofu picture would make a great Christmas card!

Wow re your being tempted by the chili tofu! And teehee re your thinking the picture of it would make a great Christmas card! :D