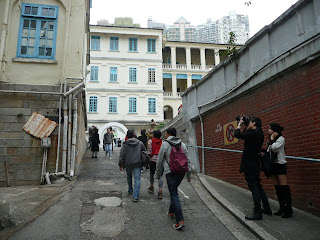 Venturing into normally locked up these days
Central Police Station.. 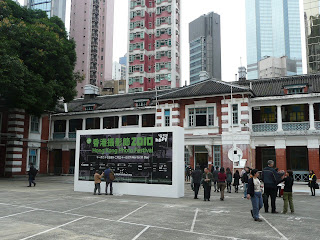 ...accessible for a time thanks to its playing host
to some exhibitions that are part of the first (and
hopefully not last!) Hong Kong Photo Festival 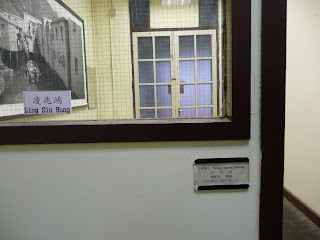 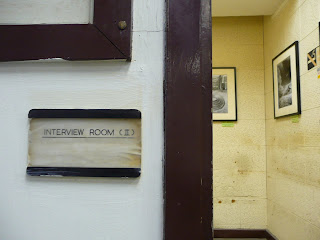 If walls could talk, I bet these ones would have
a fair few interesting tales to tell...
On September 25th, 2004, the Central Police Station was relocated from its historical premises at 10 Hollywood Road to Arsenal House at 1 Arsenal Street, Wan Chai. In the intervening years, the buildings, the oldest of which dates back to 1864, have largely lain unused and inaccessible to the public.

Every once in a while, however, some artistic venture manages to incorporate a visit to the location (or nearby Victoria Prison) into its activities. For example, a couple of years or so ago, the Fringe Club staged a one-man show (starring Lee Chun Chow) about Ho Chi-Minh in Hong Kong and its audiences were invited to tour Victoria Prison where Ho Chi-Minh had served some time. And currently, the Central Police Station is playing host to a trio of exhibitions that are part of the inaugural -- and long overdue, IMHO! -- edition of the Hong Kong Photo Festival.

Unquestionably the star exhibition, First Photographs of Hong Kong consists of room upon room of historical photographs taken in Hong Kong between the years 1858 and 1875. But Passion, the exhibition of black and white photographs by View Camera Club members, has a star draw in the form of a beautiful waterfall shot by celebrity member Chow Yun Fat while those who like to see color as well as black and white photos will be made happy that the Hong Kong 35mm Photographic Society's exhibition features a range of photos that make use of all the colors of the rainbow and more.

Still, if truth be told, I get the distinct sense that a lot of visitors to the site are just as -- if not more -- attracted by the exhibitions venue itself. And the shutterbugs among us were very happy to find that while photography was not allowed in the rooms where photographs were display, it was okay for people to take photos in and of the exteriors, corridors and others sections of the buildings which are architecturally interesting but also definitely are of interest because what took place within them for so many now bygone years. :)

I had no idea about the Ho Chi Minh in Hong Kong history. Thanks!

And that photo of him in the Wikipedia link is just too cute.

And I mean the photo of him at the Lijiang River.

Do you remain in HK for the Christmas holidays?

Glad you got much out of the info re Ho Chi Minh -- and am having fun reading the entry that linked photo generated inspired you to write on your blog. :)

I don't normally stay in Hong Kong for Christmas. As a matter of fact, this year will be the first time I'm doing so! :)

Thanks and yes, I too am glad I got a glimpse inside. :)