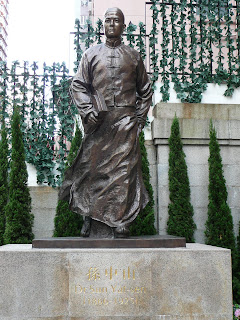 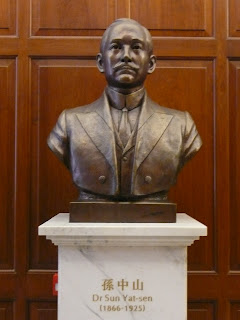 For centuries (heck, it's even noted in The Bible!), people -- male and female -- have variously observed, sighed and wailed about how it is that a good man is hard to find. For many heterosexual women (and gay men too?), they're of course referring to how difficult it is to find good "significant other" material.

But in a more general sense, it is too often felt that the world is too often full of men (and women) who just are too selfish, self-centered, weak and/or encumbered with some other failing to allow them to be truly worthy of being respected and liked -- and this especially so with regards to many a political leader and others in positions of great power and -- this they seem to tend to forget -- equally great responsibility.

Although the very co-existence of the People's Republic of China and the Republic of China (AKA Taiwan) bear testimony to his inability to completely heal the rifts between the Chinese people(s), Dr. Sun Yat Sen (1866-1925)'s being one of those hard-to-find good (political) men can be seen in how he is considered to be the father of modern China and revered by Chinese people on both sides of the Taiwan Strait and elsewhere in the world, with memorials and museums to him being found not only on the Chinese mainland and Taiwan but also places as far-flung as Hong Kong, Macau, Penang, Singapore, Honolulu and San Francisco.

Born in the Chinese province of Kwantung (now known as Guangdong), Sun Yat Sen was sent to school and later attended university (where he studied medical science) in Hong Kong. To help commemorate this, the people behind the Dr. Sun Yat Sen Museum located in Hong Kong's Mid-Levels decided to commission and erect a statue of the medical doctor turned revolutionary and statesman in the institution's forecourt that shows him as a youthful student rather than an older man (like is usually the case -- and is so with a bust that can be found inside of the same museum).

Another rare (i.e., hard-to-find) attribute of the statue in the upper photo of this Photo Hunt entry is that it shows the Chinese leader attired in traditional Chinese garb; for, as an adult, he usually appeared in public attired in Western suits or a Japanese-Western civilian-military hybrid suit that came to be known as the Sun Yat Sen suit. (Since the latter also came to be favored by Mao Zedong, it is also erroneously known as a Mao suit -- but we know better (now), don't we?! ;b)

unique take on the theme!

what a great take on the theme! a good man (or woman) is hard to find, indeed...especially in our leaders [here]. the ones we elected seem to disappoint us time and again.

This is really an interesting post and an excellent idea for this theme.
I also want to thank you for stopping by my blog and remind me. I really appreciated it and I´m so grateful to you for your reminder. Thank you!
Randi

Well done! This week's theme was also hard-to-find (thanks for letting me know!)

Not really promoting my own blog here, but I was quite taken by Sun Yat Sen's statue in our Chinatown in Honolulu a couple years ago. Here are a couple of other photos of the good doctor's statue and writings (at the end of the post).

Sun Yat Sen and Barack Obama both went to the same school.

Actually, I already have seen another entry noting that "a good man is hard to find"... ;b

I know what you mean. I wonder how many of our current political leaders will look great when viewed through the prism of history some decades into the future...

You're welcome for the reminder. And yes, I really do look forward to checking out your Photo Hunt entries as the images usually are so very stunning. :)

I haven't seen it but definitely can believe it about there being a Sun Yat Sen statue in Los Angeles' Chinatown. :)

Thanks and teehee indeed re your comments about the hard-to-find-ness of the theme itself. ;b

Thanks for pointing out that blog entry of yours. Love it (and not only for the Sun Yat Sen bits either)! And yep, had read about that school connection between Sun Yat Sen and Barack Obama. That school's people must be proud indeed. :)

Great take on the theme. He truly was a great man. Have a great weekend

I really love your take on this week's theme. You are so right in a good man is hard to find but even more harder is a great man such as Sun Yet-Sen. I have seen several places and statues dedicated to him even outside of the areas you mention. I particularly liked the garden in Vancouver BC.

Again - excellent write up and photos.

I nearly post the same title as you, but then a good man is really hard to find. :P

What a great take on this theme. Thanks for the tribute to him. I wish that good statesmen and leaders weren't so hard to find.

Very special but very interesting too, take on the theme !

An unique take of the weeks theme.
Like the idéa.

Teehee, yes, agreed that a clever blogpost can be hard to find too. :D

Thanks for the mention of a Sun Yat Sen garden in Vancouver -- a place that I've heard being referred to as "Hongkouver"! ;b

Heheheh... have a feeling a lot of women do think that a good man is hard to find indeed. :D

I wish the same. The world would be a better and safer place if we had better leaders in the world...

Hope you liked my take on the theme! ;b

Very interesting take on this weeks theme,on a very good man. Thanks for the great read. Happy weekend.

what a historical twist to the theme, fascinating post.

I agree with all the comments, this is a very interesting take on the theme. Love the photos too.

You managed to get all kinds of different takes on the theme with this one.

This is an interesting take on the theme, mine is similar but you have actually expanded on it quite well. And I agree :)

This was a very interesting post for the theme. Fascinating subject matter.

How very interesting indeed. Please have a good Sunday.

Thanks for coming over and reading as well as looking. :)

A special thanks to you for not only reading what I have to say but those of the others who contributed to this comments thread. :)

Did I? Hadn't realized that! ;D

Am glad my take meets with your approval. ;b

Thanks for reading as well as looking once more. :)

Thanks, and here's wishing you a good Sunday too. :)

Am glad you found the information I provided in this blog entry to be interesting. :)