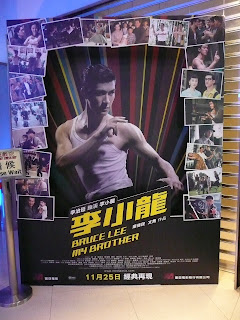 At this year's Hong Kong International Film Festival, there was a special tribute programme of nine Bruce Lee films that drew attention to the martial arts legend having acted in Hong Kong films as a child as well as adult -- and it being so that, had he lived, he would have had his 70th birthday in 2010. Then, this past Saturday, as I viewed a newly released Bruce Lee bio-pic that appears to be based on a book written by Bruce's younger brother, Robert*, along with the memories of their two sisters, Phoebe and Agnes, I discovered that the late martial artist turned actor would have turned 70 on November 27th, 2010.

Starring 23-year-old singer-actor Aarif Rahman (who was credited as Aarif Lee in his debut film, Echoes of the Rainbow), Bruce Lee, My Brother begins with an interesting note cum disclaimer to the effect that "This production is a dramatized story of Bruce Lee's early life, based substantially on the recollections of the siblings of Bruce Lee. This production is in no way connected to, or associated with, BRUCE LEE ENTERPRISES LLC, the widow, children and estate of Bruce Lee, and the materials used in connection with this production, or the matters depicted in it, have not been provided by same."

Then, two Bruce Lee siblings appear on screen -- one speaking in English, the other in Cantonese -- to stress that this film tells the fact-based story of the young Bruce Lee and his family... as in father Lee Hoi-chuen (played by Tony Leung Kar Fai in the film), mother Grace Ho (portrayed by Christy Chung), his siblings, aunt, grandmother and the rest of her extended family rather than Bruce's wife Linda and children, Brandon and Shannon.

Right from the get-go then, it's emphasized that this is a family saga -- and one that will be told from a distinctively Hong Kong point of view. And while the dramatic section of this movie does begin in San Francisco (where the man whose Chinese stage name translates into Little Dragon Lee was born), it soon quickly moves to Hong Kong, where Bruce Lee spent the bulk of his growing years (and would return after a spell back in the USA).

Additionally, while there is no doubt that this film is about Bruce Lee, it actually is a while before his character takes center-stage. Instead, the production focuses for a time early on on Bruce's parents -- and goes to quite a bit of effort to show that his father was actually a prominent Cantonese opera star turned film actor (whose social as well as professional circle included such luminaries as actor-director-scriptwriter Fung Fung and actor Walter Tso) and his mother was someone who could speak English as well as Cantonese fluently (Grace Ho actually was the niece of prominent Eurasian businessman-philanthropist Sir Robert Hotung.).

Very early on, Bruce Lee gets sucked into the Hong Kong movie world. At the same time, however, those were the days when actors -- adult or child -- weren't paid that much and thus didn't seem to live a world apart from ordinary folks. So the young Bruce gets shown making friends with such as a maid's son (played by composer-singer Hanjin Tan as a young adult) and getting into all sorts of antics in the neighborhood and on the streets of Hong Kong.

Particular attention is paid to Bruce Lee's final high school years -- during which he falls in love, enters a cha-cha competition and comes to learn martial arts (wing chun at Ip Man's school -- if you didn't know already!). And it's during this section of the film where events portrayed can seem too dramatic to have been true. And yet, the records do show that Bruce Lee was a cha-cha champion as well as high school boxing competition winner! So I'm quite willing to take quite a bit of the story in the movie on trust (even while also throwing in a pinch of salt here and there)!!

All in all, I like how Bruce Lee, My Brother is more of a family drama than an action work -- and that its makers flesh out the world in which the young Bruce and his family lived, worked and played. (Among the nice and fun touches here involved not only referencing many a star name of yesteryear -- in particular, I appreciated the scene featuring Shek Kin (as Wong Fei Hung's adversary) and Walter Tso (as Wong Fei Hung's chief disciple, Leung Foon) -- but having them been played by contemporary familiar faces such as Cheung Tat Ming, Chin Kar Lok and Lawrence Cheng.)

The way the movie ends, you know that the filmmakers are hoping that the work will prove to be enough of a commercial success to make a strong case for a sequel to be made. And I, for one, most definitely do hope that this will indeed be the case.

*Link corrected: Thanks, Phil (AKA orientalsweetlips)! :)

Thanks for the review. Am curious whether this is getting a large release or is it just a small indie type release in a theater or two? And how is Christy looking these days?

Can't wait to see it...must make sure my Chinatown vendor can get it eventually. I loved the 3 Ip Man films...maybe this takes the place of the undone fourth follow-on?

Regarding your book information, I think you meant to link to this one:

The one you linked to was co-written by Grace Lee aka Grace Ho - Bruce's mum, not his sister. :-)

by the way, the disclaimer at the beginning of the film is because of the crackdown Shannon Lee (aka BRUCE LEE ENTERPRISES LLC) has been having on abuses of her various Bruce Lee trademarks. She holds all the international rights to Bruce's name/image and as such there is a bit of animosity between Bruce's remaining siblings (Robert and Phoebe) and his daughter. I think she initially objected to the film, but I guess they worked something out.

Sounds like this is right up my alley! Glad to see it got the YTSL stamp of approval. ;D

I'd say that it got a respectably medium to large release -- it's definitely not an indie movie! And Christy's looking good, I reckon -- and added a measure of gravitas that's pretty attractive. :)

If you like the 3 "Ip Man" films, I think you'll like this a lot. In a way, it's like the Herman Yau "Ip Man" movie -- but it's more grounded/realistic (even while also most definitely having its dramatic moments) and is all the better for it, I reckon. :)

Thanks for the correction re the book. Only HK$68 -- but would there be an English version? At the same time, reckon one co-written by Bruce's mother would be cool too. :)

As for the rights issue and Shannon Lee: I wonder how she would/will react when the story gets to the part where she, her mother and brother are in the picture...

I hope you'll enjoy the movie as much as I did when you watch it! :)

I don't think there is an English version of the book...yet. It's a shame because I think the majority of BL fans are not actually Chinese (nor Chinese literate).

Will there be a follow up? I don't know, my previously reliable contact (who is friends with Robert, Phoebe and Clarence Lee - Robert's son) is no longer in contact so I no longer have the inside track :-(

An English version/translation of the book would be great. It's somewhat ironic that there isn't -- since English was the language Robert chose to speak in the time he (the real person, not the actor(s) playing him) was on screen in "Bruce Lee, My Brother".

I think that "Bruce Lee, My Brother" is already playing in Singapore (where you are). Don't know how it will feel watching it dubbed into Mandarin (as Cantonese films invariably are in your country) -- but hope you'll enjoy watching it nonetheless!

This one sounds interesting. Looking forward to the opportunity to see this. Can't wait for your Top 10 Movie List for 2010!

Wonderful bit of cinema - althoug I suspect a lot of the hardcore Bruce Lee-fandom will be turned off by the family drama and lack of action. But classy, well filmed and a stellar performance by Tony Leung Ka Fai (no surprise there).

Glad the movie met with your approval. And yeah re certain Bruce Lee fans potentially being disappointed by the lack of action -- but, for me, I really appreciate the more dramatic tack that this film's makers took.