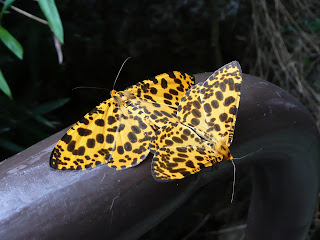 
Every once in a while, I go hiking in the company of Roz's Hiking Group. (I'd do it more except that these very friendly folks tend to go for long hikes that begin at 9.30am whereas my preference is to wake up late on weekend mornings!)

In any event: among the regulars is someone who, like me, can get a tad obsessed with trying to take photographs of butterflies and moths. And we've been a source of amusement to others on more than one hike as we announce our spottings to the other and/or temporarily stray away from the group proper in pursuit of those winged creatures.

More often than not, however, we've found to our chagrin that those insects are really hard to take photos of as they prefer to fly about rather than stay still for a reasonable amount of time anywhere. So imagine my surprise and excitement when I came across a pair of colorful moths lying still atop a railing while out hiking last weekend.

Only after I snapped the above photograph of them did I get to wondering why they were lying so still like that. Were they dead, I wondered? No, opined my dear mother, who proceeded to point out that not only were those creatures alive, they also actually happened to be going about *ahem* creating life...! :O ;b

(And should you wonder: I'm trying to not use the "s" word since I really don't want a whole bunch of people intent on searching for s-- coming over to this blog and getting disappointed the way that it seems that quite a few people looking for a-- have been when coming over here because I happen to have blog entries about movies in which women kick ass!)
Posted by YTSL at 10:58 PM

I happen to have blog entries about movies in which women kick ass!) Which is how I first found your blog--but it was while searching for "The Heroic Trio", having finally acquired a copy of it--a VHS tape, no less, a couple of years ago. Imagine my surprise when I found that the blog was written by the same person whose writing about Hong Kong movies I had admired on "View from Brooklyn Bridge." I remember thinking when reading your reviews in Brian's blog "who is this mysterious YTSL person, known only by an enigmatic acronym?"

Wow... those are stunning! Is that a common type you've seen on your hikes?

Many thanks for the butterfly p*rn! ;p

So cool to know that: a) you found my blog via an internet search; and b) used to know me (or, rather, my writings) from brns.com.

BTW, just in case you still don't know, YTSL are my initials. And Brian initially suggested I go by them as I may well have been the first female regular reviewer of Hong Kong movies on the internet (in English) and he wasn't sure how people would react to my reviews because of my gender (and vice versa)!

Also, one reason why I decided to start this blog was to be able to write about more than just movies on the internet. Though, of course, I can't help but still refer to movies some times... ;)

Yes, those butterflies are fairly common. But there is quite a variety of butterflies in Hong Kong -- some even more stunning. Hence my butterfly "obsession" while out hiking. :)

Cool shot! That's certainly not something one happens upon every day.

Thanks and have to say that duriandave's description did make me laugh! :D

I have been known to go leaping across grassland in pursuit (fruitless) of butterflies to photograph. Now I know I just have to wait until they're in the mood. :)

What a beautiful photo.

Teeheehee re your comments! And to be honest, don't tend to leap into grassland here as I sometimes am on mountainous ledges when I spot butterflies or worry that the grass may hide snakes or other scary creatures... ;S