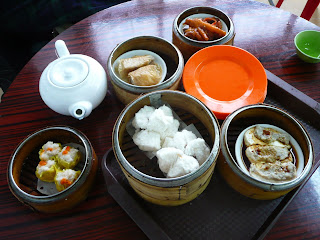 Guess how much a dim sum meal comprising
these and 6 other similar sized dishes cost? 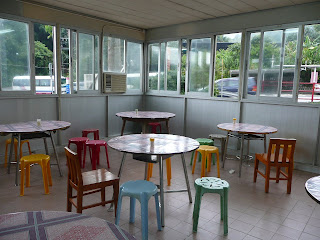 But before you start estimating, bear in mind
that the dining environment was on the
spartan -- though clean, mind! -- side... ;b
About a month ago, I wrote about leisurely partaking in a dim sum meal being one of the activities that can be enjoyed when it's raining in Hong Kong. And going off to have dim sum (or yum cha -- as it's more commonly referred to in the Big Lychee) was what a friend, her family and I proceeded to do yesterday despite it being on the rainy side when we left our respective apartments to meet up at Tsuen Wan, a part of Hong Kong that took all parties around an hour to get to from where we live.

Before any one wonders: yes, one hour by public transportation is on the far side to go to have dim sum. And even after getting to Tsuen Wan, our travels weren't over -- as we then had to head part way up into the hills along Route TWISK to the village of Chuen Lung which I had only ever passed through once on the way to the start of a memorably wet hike.

Nestled as it is on the border of the Tai Mo Shan and Tai Lam Country Parks, the village of Chuen Lung probably sees far more foot traffic -- especially on weekends -- than most other settlements in rural Hong Kong. But in addition to hikers, it also attracts dim sum afficiniados due to there being two dining establishments there that offer tea brewed in fresh mountain water and food (such as cheung fan (steamed rice rolls) and tofu fah (soybean custard)) conditioned by that same water.

Probably because of the rain as well as because we arrived there at a relatively late hour (i.e., close to 2pm), the Choi Lung Teahouse was not even half as full as I had seen it when two other friends and I had passed by on the way to hike the Lung Mun Country Trail some time back. Worse, the restaurant had already sold out all of its cheung fan for the day (though, fortunately, not its equally vaunted tofu fah)!

Nonetheless, there was enough different dishes to try (including the perennial favorite that is char siu bao (barbecued pork buns) but also dishes I had never seen before including a concoction consisting of what effectively amounted to a quail's egg atop a minced pork patty) to make this diner -- at least! -- happy. And to add to the rustic atmosphere, the restaurant still continued its unusual self-service modus operandi requiring customers to go into the kitchens to look for and take what they wanted themselves (as well as get fill one's own tea pot and cups)!

If truth be told, I think others in my party were a bit taken aback -- and even put off -- by how spartan as well as casual everything was at the eatery. But after we saw the bill, everyone agreed that the meal actually was incredibly good for the price. After all, it's not every day that a dim sum meal in Hong Kong will amount to just around HK$41 (~US$4.29) per person!

So count me as a satisfied customer -- and I do intend to go back again for dim sum some time, rain or shine. The next time though, I definitely plan to be there earlier so that I can try their cheung fan -- and especially if they offer the option of pork liver as one of the stuffings, I definitely will be in Elysium!!! :b

That looks like the perfect lunch/brunch on a Sunday.

I especially like the 2nd shot... all the legs of the tables and chairs and their colors. Just love it as soon as I pur my eyes on it :)

The food looks so good.

This past year I've started to notice plastic stools and chairs and the variety of styles and colors they come in. My favorite chair to sit in at my home computer is a plastic lawn chair...right height and size.

Perfect might be too great an accolade but it was a pretty good Sunday lunch/brunch. :)

Glad you like that second shot. When I took it, it was with the intention to give an idea of the place but after looking at it some more, I do like its aesthetics in and of itself. :)

Wow re your love of plastic furniture! Next time you come to Hong Kong, you should hunt around for shops selling plastic stools and chairs -- there are plenty of those around here! :D

Do you have Jason Wordie's Kowloon book? I was just wondering if this is the same place he talks about in there. I don't have a copy myself but remember reading something about good dim sum up this way?

Yes, I do indeed have Jason Wordie's Kowloon book. (Also have his Hong Kong Island book and wish he would come up with a New Territories book ASAP!) And yes, Chuen Lung is indeed the place he described as "[v]ery popular for its high quality tea brewed with fresh mountain spring water" in it. :)

excellent stuff. Sounds like a place worth checking out, so many thanks.

Yes, agree about the NT book. I was under the impression he was doing a version for Macau as well, but I could be wrong. Great books.

A Macau book? That would be cool too but have to admit that I'd prefer a New Territories book first! :D