At the Hong Kong International Film Festival (HKIFF) once more 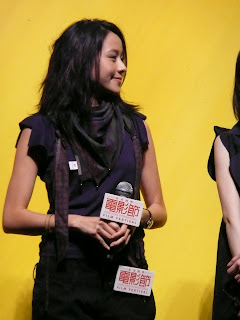 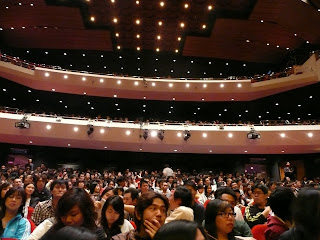 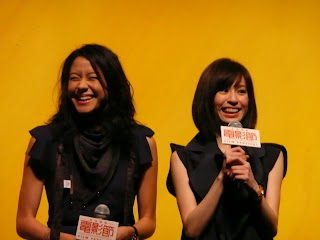 Another star shot: This time,
of Karena Lam together with co-star Cyndi Wang
A friend of mine recently e-mailed to ask how I'm managing to regularly update my blog and e-mail friends along with work full time and do your share of HKIFF-ing. One answer to that question is that I've actually not done as much film festival attending as in past years; with the movie screening of Candy Rain -- a Taiwanese film that has been hyped as "the hipper, female version of Happy Together" (even though, among other things, it's not set in Argentina!) -- that I went to last night being only the 10th film I've seen at this year's Hong Kong International Film Festival (though, to be fair, I'd also seen two films officially having their world premieres at the HKIFF before the film festival officially got going!).

At some point in the near future, I'll write up some comments on the films I've viewed at the HKIFF. For now though, I'll devote what remains of this weekend to checking out more fest offerings and resting in between doing so (in order to ensure that I'll not be tired and fest-ed out). And, of course, taking and posting up interesting movie-related photos for your (as well as my) enjoyment when the opportunity arises... :)

Is Candy Rain like Spider Lillies? In that you had a pop star (Rainie Yang) and a decent actress (Isabella Leong) doing an art film vision of a lesbian relationship? In Candy Rain, you have the same good actress/pop star mix.

I guess I should confess that, despite not knowing much about current Cantopop or Mandopop, I do kinda enjoy what I've seen and heard of both Rainie's and Cyndi's pop videos and songs.

I know enough to know that neither is even in the same universe of talent as Faye Wong or Anita Mui.

i so wish i could've been at this year's HKIFF!!

Thanks for sharing YTSL! Been visiting and checking out what I missed! :(

"Candy Rain" is better than "Spider Lilies" (which, by the way, as the same director -- if you didn't know already). Also, it feels less artsy and more populist -- especially the generally cartoony last section (in which Karena Lam features) -- albeit after getting off to a slow, art-house movie kinda start.

Another BTW: You might like to know that "Candy Rain" has a killer soundtrack that I'm not sure whether Karena Lam and her other co-stars contributed to but know features a few Faye Wong songs that sent chills up and down my spine among my hearing them... :)

Maybe I'm just lucky but I feel that this year's batch of movies may actually be better than last year's. OTOH, of the (four) HKIFFs I've attended thus far, it was the 2006 edition that would be my pick of the bunch.

Anyways, am glad that you're continuing to check out my blog and enjoying living vicariously through me! ;b