Crazy luxurious decor at Madrid's Palacio Real that I wish I could have photographed (and need to be seen to be believed!) 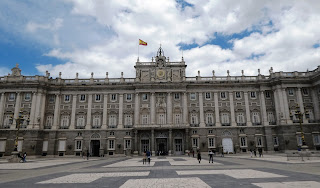 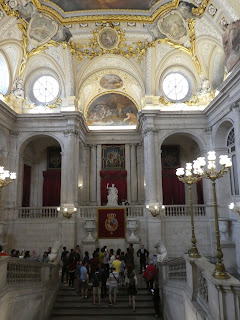 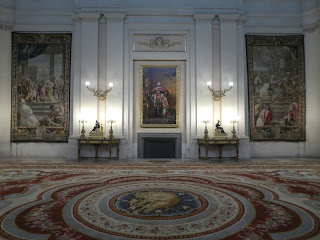 The Guard Room is the only room in the palace where
photography is allowed -- probably because it's one of the
more modestly decorated rooms in the complex!

It used to be that photography was not allowed in museums.  But in recent years, I've seen photography -- so long as it doesn't involve the use of a flash, and, increasingly, tripod or selfie stick too -- to be allowed in museums as celebrated as Amsterdam's amazing Rijksmuseum along with various museums in Spain, Norway, South Africa, Hong Kong, Japan and elsewhere.

Although a part of me wonders if this is for the security reasons, a larger part of me suspects that this is the case in order to encourage the purchase of souvenir photobooks: both because of the commercial nature of the website of the state agency which administers this and other Spanish royal palaces and sites, and the incredible eye candy offered up in many of the rooms of the largest palace, when measured by floor area, in Europe.

Built on the site of a Muslim fortress, construction on the Palacio Real took place in the middle of the 18th century and it was the royal residence of Spanish monarchs up until the great-grandfather of the current Spanish king who, like his father before him, prefers to make his home in a more modest palace on the outskirts of Madrid.  And while it can seem kind of wasteful for the Spanish royal family to live in another royal palace (that the state presumably then also has to pay to maintain), I could imagine people going crazy (a la Bavaria's Mad King Ludwig) if they were to spend a large amount of time in the kind of over-the-top surroundings I saw on my visit to the Palacio Real.

For me, absolutely the most insane looking space of all was the room in which Charles III (1716-1788) dressed and received special audiences.  Known as the Chamber of Charles III (or the Gasparini Room, after its Neapolitan designer), the entire room was done up in the late Baroque-Rococo style and designed as a single, super ornate gold-green-pick ensemble, complete with detailed stucco work (including of "Chinese people" in the corners of the ceilings) seemingly in every bit of space not filled by ceiling frescoes, marble furnishings or silk embroidery!

If there was one room I could photography, it would have been it.  Meanwhile, my German friend appeared most taken by great hall of the palace's armory in which was displayed the massive personal armor wardrobe of not one but two Spanish kings and much more besides.  It's hard to imagine that items whose primary purpose was related to warfare can be so ornately designed and decorated.  But, then, the fact of the matter is that they were made for royalty after all, and often came to be worn at ceremonies rather than (just) the battlefield.

At one point during our visit, I shared with her that I could easily see the royals who lived in places like this thinking that they were an entirely different species or breed, not just class, of being from the hoi polloi.  To which she added the suggestion that this would be such a dangerous disposition in leaders and why she, for one, is happy that her country has done away with royalty.

Something else that I came away from there (and the likes of Versailles) thinking is that seeing crazy luxurious stuff like this makes me understand better why the French Revolution happened, and Louis XVI and Marie Antoniette were accorded such violent ends.  Still, I know others have different thoughts and reactions when seeing unabashed luxury like this.  After all, the week that I visited the Palacio Real, the wedding between Prince Harry and Meghan Markle took place and was accorded major news coverage not only by the British media but also the likes of CNN and newspapers in Spain!
Posted by YTSL at 11:20 PM

Thanks for the post ... Palacio Real was one place that I wanted to visit but just couldn't find time. Three days in Madrid was too short.

You're welcome -- and I agree that three days in Madrid is too short. Its major sights can take up so much time to go through. E.g., I figured that I'd need a day to go through the Prado but didn't realize that would be the case with the lesser known -- but actually pretty worthwhile -- Museo Nacional Thyssen-Borenemisza too!