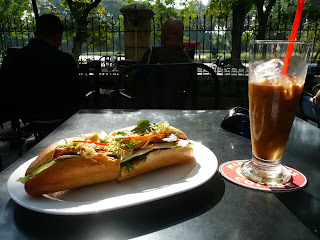 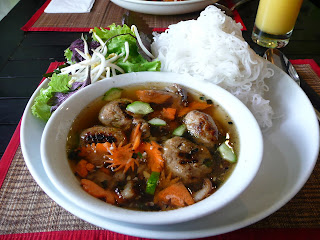 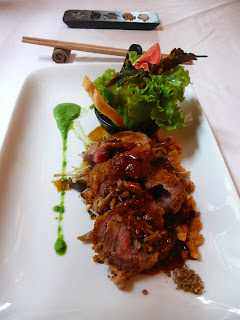 Decades ago when I was still a student in England, I ate my first Vietnamese meal at a pho noodle place in London's Chinatown.  Instead of coming across as exotic, that bowl of beef pho struck me as the closest thing I could find in England to a Penang dish I like very much called goo bak koay teow, whose name literally translates from Hokkien into English as "beef flat rice noodles".  Put another way, it served as the closest substitute I could find to a favorite dish from my home state.


So while Hanoi has restaurants that serve up non-Vietnamese food, I pretty much stuck to eating the local cuisine on my recent Vietnam vacation -- until the final day when I decided to go for a meal at Didier Corlou's West meets Asia (particularly French meets Vietnam) La Verticale.


Almost needless to say, La Verticale was the priciest and fanciest of the eateries I ate at in Vietnam (and even then, the food part of my bill amounted to just 150,000 Dong (i.e., less than US$6.50), with the Gin and tonic I decided to also have being priced at 110,000 Dong (i.e., less than US$5.50)).  But while the lamb in tamarind sauce I ate in lovely surroundings there was pretty good, I have to say that it wasn't the best -- or even second, third or fourth best -- dish I had on my trip.


While I can't rank them exactly vis a vis one another, the following were definitely better than what I ate for lunch on the final day of my Vietnam visit: the spare ribs with "New Day" sauce at the budget-priced New Day Restaurant; the prawns cooked with vodka(!) on board the V'Spirit Ha Long Bay cruise I went on; the fried catfish with mango at the lovely Garden Restaurant; and the large portion of bun cha I was served at the for KOTO Hanoi social enterprise restaurant (and pretty easily managed to finish because it was so very delicious!).

And while I wouldn't visit Vietnam just to eat (the way I would with, say, Japan!), it's also true enough that -- unlike was the case with TomEatsJenCooks' Tom -- I felt pretty satisfied with what I did eat there, starting from my first meal in the country (which cost around 60,000 Dong (i.e., around US$3) at the branch of Highland Coffee located right next to the Military History (AKA Army) Museum) all the way to my final meal (consisting of another banh mi -- only this time with a pate filling -- and Vietnamese beer rather than super strong coffee!).
Posted by YTSL at 11:59 PM

Thank you for the info and the photos.

Your first photo brings back memories of our summer visits to Montreal... a small Vietnamese lunch counter in Montreal's Chinatown where I bought 5 of the 7 types of sandwiches on the menu to accompany us to Fantasia Fest and a small place near Concordia University (site of many Fantasia Festivals) where I buy banhi mi for our trip home.

What do you like best in your banh mi? In Hanoi, I had one with pork, and another one with "pate" (more like finely ground meat) -- and yes, both of them were pretty tasty! :)